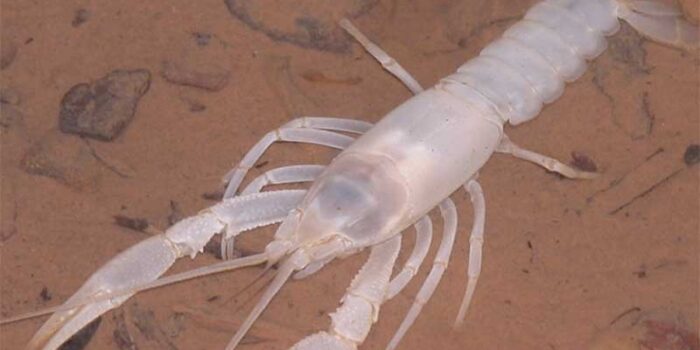 Counting eyesight as one of our five senses, but some blind animals don’t need it at all and having a normal life. All living things vary flaws in different ways either any fossorial absence or of any senses problem. Hence we come to know about the animal species that are born blind and cruise the world throughout their entire lives. For them the darkness is the pure light, underground creations have realized that eyes are waggish when you literally live life in the dark.

Most importantly for the identification of food sources, avoidance of predators and temperature effects, blind animals use a couple of amazing senses to hunt. According to some research animals that use to live only in caves known as ‘Cave Dwellers’ they adjust their lives in the dark many such animals have poor vision or they are completely blind.

This most amazing blind animal Hydra is not visible with naked eyes, we need to take the help of a lens or microscope to view them properly. Hydra is truly captivating small aquatic animals. Most hydra is tiny, reaching a maximum of only about 30 mm long when fully extended. Stinging cells and tentacles help them to stun, entangle, or kill their prey before eating it. They are domestic to the temperate and tropical regions.

Braminus has a non-segmented angular body and 4 – 6½ inches in length. They are completely burrowing animals, with habits and appearance similar to an earthworm. One of the most important animals which are only female’s brahminy blind snakes, no males. Actually, the development of the egg cell division starts without male sperm. This amazing factual animal has an indistinct head and tail.

Axolotl which is one of the beautiful pink blind animals on planet earth. It has a fine layer of skin that completely covers their eyes. The natural sense of hearing and smell helps them in navigation and finding food. It can grow up to a foot in length and eats snails, insects, and little crabs. Like a lot of other blind species on this list, its skin doesn’t have any pigmentation. Researchers have also discovered new electroreceptor sensory organs on its head that have been called ampulla organs.

The Brazilian blind characid is a species of fish. It has been rediscovered by scientists, an incredibly rare blind fish that lives underground in Brazil. It can grow up to a size of 4.6 cm and even lack pigmentation. A number of individual fish have been found almost 50 years after the only known specimen was collected and then described by American experts. According to one theory these darkness habitat’s embryo saves energy and normally uses this to develop other body parts.

This spider is a tiny 0.8 inches in length and one of the most amazing animals in the world. Mostly feeds on a type of cave amphipod. Well, instead of using a web to catch its prey, it runs after its victims and catch them with its triad of big teeth. Nicknamed “the blind spider”, this blind animal is very rare and undefended and can only be found in a small selection of caves.

The star-nosed mole is a completely blind animal and uses its 22 tentacles and 25,000 sensors around their nose to use detect its prey. Research by neuroscientist and star-nosed mole expert showed that the mole’s nose would make very rapid movements similar in speed to super-quick “saccadic” eye movements whenever it found food. Their tentacles play an active part in their movements. They are the first known mammal that can smell underwater and are excellent swimmers.

It is an odd-looking species that was recently discovered in the Amazon River. It is grey in color and can grow up to 3ft long. This blind animal’s skull is very different from those of other caecilians, giving the animal a broad, flat head. It has an enlarged mouth with an energetic cheek and sealed nostrils. Its body has a fleshy dorsal fin. Although it is not a snake, it has been called various names such as “floppy snake “or “penis snake”.

This blind animal, the beetle has no eyes and orientates itself in the eternal darkness with long antennae and legs sensible to vibrations. In this way, it avoids dangers in the darkness. The greatest peril threatens from the surface in the form of pollution, which discharges into its world, and collectors who keep taking these small beetles and other animals out of caves.

It is one of the most amazing blind animals in the world.

Cave shrimps shell has no pigment, this blind species is nearly transparent and closely resembles its nearest relative is Alabama cave shrimp. It can taste, touch, and smell its food using a pair of long antennae. It sheds its exoskeleton or molts, every 40-50 days as it grows. It is mostly pressurized by contaminated groundwater running into its habitat. It walks very slowly on the bottom of the stream but swims quickly.

Such blind animals have a highly sensitive touch and smell senses that help them to survive in the dark.  Their body is colorless and translucent. In addition, the reproductive eagerness of males affects how they interact. This cause of social status dominate aggressive link between individuals, it reduces the amount of energy required to keep themselves alive, and therefore helps to stabilize the population over time.