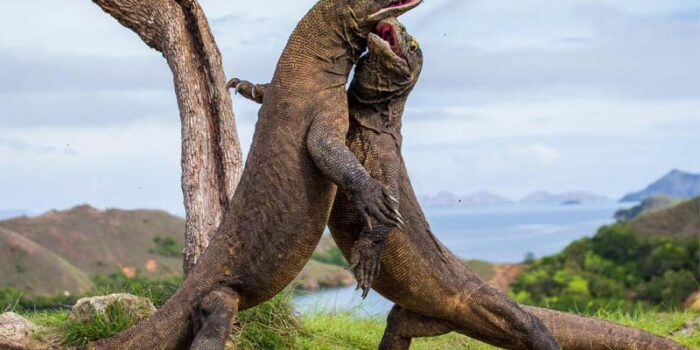 Let’s meet here the toughest animal in the world.

Wolverine is bear-like an animal that is famous for being one of the toughest animals in the world. This is second-toughest animals resembles bear but a little small in size. It is the animal of the Arctic and Sub Arctic regions of the world. Wolverines have poor eyesight but their sense of smell and hearing is very strong which helps them to prey and find food. Due to its strong and powerful jaws, it can eat even the frozen bones of their prey. Such toughest animals have dense stocky fur which helps in prevention from freezing in winters. It has the ability to run very fast which helps in chasing and hunting its prey. The mountain lion, bear, and wolf are its predators, but its primary predator is human.

Deathstalker is the most dangerous and poisonous species of scorpions family. It is found in North African deserts. It is a tiny yet very tough n powerful animal. If it bites, its venom causes severe pain and ultimately the death of the prey. Such toughest animals have tiny sensory hairs all over its body which can easily sense even the vibrations in surroundings and hence it helps in chasing and hunting its prey. It feeds mostly on insects, centipedes, earthworms, and spiders. Such toughest animal is nocturnal in nature mostly hunts in dark. Hence, can easily hide under the stones to sense its prey motions.

This tiny perhaps a few centimeters long frog is the toughest animals in the world. It lives mostly in the Colombian rainforests. Hence, it is known as the most deadly species of all the animal kingdom. Furthermore, poison secreting glands in located under its skin due to this merely the touching of this animal means the end of your life. It is as poisonous as to kill 10 grown human beings. They belong to the amphibian’s class of animal kingdom. Research has found that such toughest animals in the world toxin are one of the powerful painkillers ever used in the human world.

Like the usual domestic buffalos, this cape buffalo seems to be as calm and innocent as a domestic buffalo and cow, but these toughest animals due to its destruction which it has created are known as “The Black Death”. This toughest animal in the world has estimated to cause almost 200 people death per year. It is one of the most dangerous animals among all the other game hunters. It is mostly found in Africa’s forest. These toughest animals in the world are a very dangerous animal to hunt. It is also known as African Buffalo.

While talking about the toughest animal in the world, African Elephant is this much high in the list. This giant species of elephants is as huge as to crush down tall trees at ease. It is 13 feet tall on average. While as big as to carry almost 700 pounds weight only by its trunk. It is one of the longest and toughest animals.

Salt Water crocodile is one of the largest living reptiles. Although it’s an aquatic animal it spends most of its time on land. It is almost 7 to 9 feet in length and 2500 pounds in weight. Such toughest animals are as powerful as if the attack on a person then there will be zero percent chances of survival. It is so big and tough that it can easily crush a cows skull with only it’s a single bite.

Hippos are known as one of the toughest animals in the world. It is known so because of its size and the thickness of its outer skin. It seems as calm and peace-loving but if attacks, then there is no chance of escape. Its skin is 30mm in thickness which is very hard to even a scratch.

Komodo dragon as its name indicates resembles dragons. It is the toughest animals in the world because of its size. It can survive in a very hot climate. This gigantic lizard is usually 8 to 9 feet in length and up to 250 pounds in weight. This toughest animal carries a deadly bacteria in its mouth which kills its prey in a single bite. Hence, can eat up to 80 percent of their body weight in their one single meal.

The last but not least animals that fall in our toughest animals in the world. The snow leopard is known for its toughness because it can easily adapt itself to its tough habitat, i.e. high Rocky Mountains of Central and South East Asia. They have very strong and powerful legs which help him to jump as far as 50 feet. It is known as the beautiful Indian toughest animals. Moreover, it has the largest strong and full of fur paw which usually looks like snowshoes.