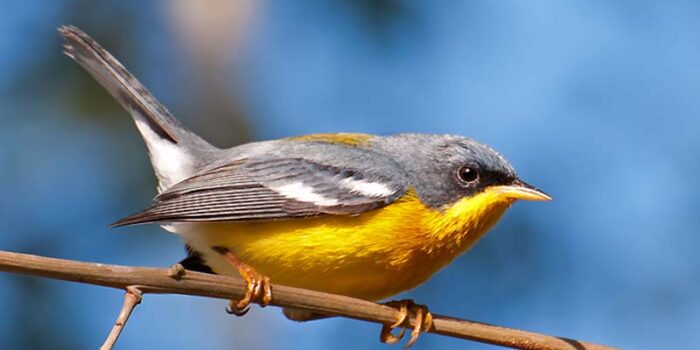 Birds are among the most famous and adorable animals present in this world. Everyone is well aware of the flying ability of these stunning creatures. Along with flying, they are born with many other amazing characteristics. Their colorful feathers and variety of beautiful calls are very famous among all bird lovers. Birds have a very elegant and soft body and are loaded with innocence. Different bird species with different and unique characteristics are present in this world. Some are the largest birds, some are the highest flying birds, and some are beautiful crested birds. Did you know about the fact that a bird sounds really amazing? Yes, talking birds also exist that have a great ability to mimic the human voice.

Nature has blessed us with many cute and beautiful birds. Different bird species can’t fly and they are known as flightless birds. Another main advantage of birds is that they play an important role in plant reproduction. No doubt they are the most interesting creatures living on Earth. Following is the list of 10 most adorable and cute small birds that will really amaze you with their priceless beauty. 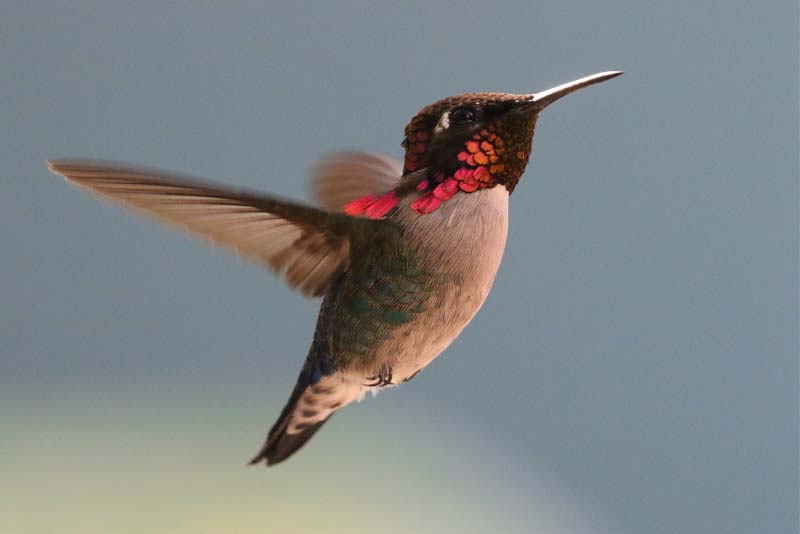 Bee Hummingbird is the most adorable and cute small bird. It is at the top of the list of small birds and it is only found in the Island Country of Cuba. Its size is only 5 cm and its weight is up to 2 grams. Males are famous because of their brighter plumage. Females are usually larger in size than males.  The interesting thing about them is that when they are in search of food they can flap their wings eighty times per second.  Surprisingly this may go up to 200 beats per second when their mating session actually starts. You will mostly find these amazing creatures on flowers. They actually visit over 1200 flowers a day. They usually suck the nectar from the flowers and it is their main diet.

Weebill marks its name as number 2 on the list and is native to Australia. They are a very common bird and mostly live in wooded areas. Sometimes they are also spotted near human habitation. They are extremely famous for their small beak and they are 8 cm long. Their favorite place is small flocks and they prefer to live there. Their nest is in a peculiar domed shape and is completely made up of mud and grass. The unique thing about them is that they are non-migratory birds. They spend their whole life in the same place. This unique thing makes Weebill different from others. Insects and seeds are their favorite food. The small beak which is actually surrounded by small feathers helps them catch insects. 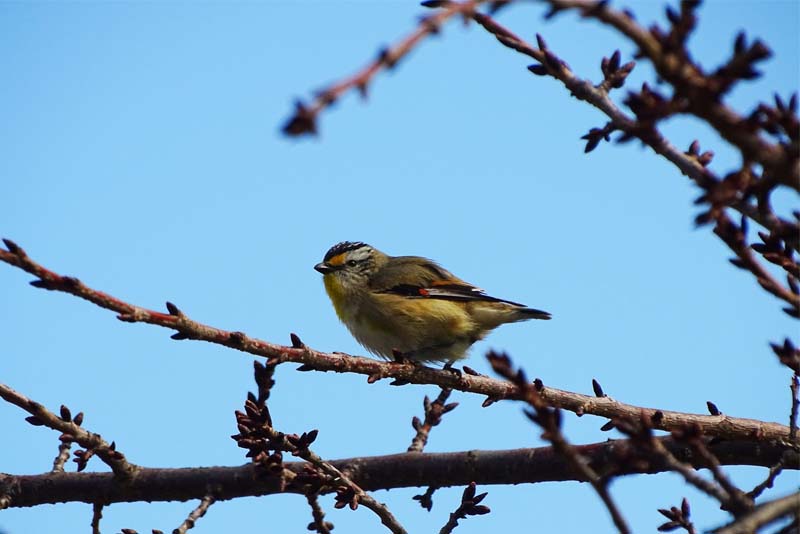 Pardalote is actually 8 to 12 centimeters long and is also native to Australia. They are among those bird species that do not migrate from their birthplace. The forests of eucalyptus are the place where they actually live. The size and appearance of both males and females are the same. They have great importance in the ecosystem because they decrease the population of pests called lerps. Lerps basically suck the sap of trees. They have a short tail, wings and heads have stunning olive green and black color with adorable white spots. The whole underside is dull yellow. The whole personality of this amazing creature is really attractive. They mark their name at number 3 in this list.

Gold Headed Cisticola is one of the most adorable and cute small bird is found in a wide range of habitats in India and Australia. The bird is 10 cm long and weighs only 10 grams and is a type of warbler. This amazing creature lives in farmlands, wetlands, and grasslands and is also known as the best builder of cute birds. They are specialized in making brilliants nests. They actually make nests by stitching together grass, spider webs, and leaves. The male bird has bright golden and cream plumage while the body of a female is dark brown with a cream-colored underbelly. Their main food and favorite food is insects and seeds. 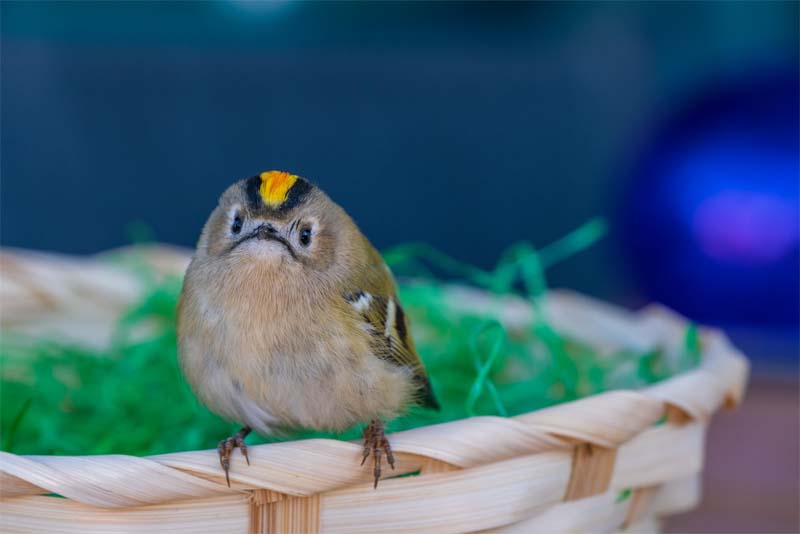 The Goldcrest is native to Northern Europe and is named after the bright yellow patch which is present on the top of its head that looks like a crest. The male is brilliantly multicolored with an olive-green body and a pale yellow underbelly. The color of a female is completely yellow. There is not much difference in the size of both males and females. They mostly live in the broadleaf forests which are common in Europe as well as in gardens. They are extremely famous for their high-pitched melodious calls. These melodious calls are very common in winter and they also sing in the gardens.

Brown Gerygone is basically an Australian bird that belongs to the beautiful family of passerines and is the smallest of this type. It can grow only up to 10 centimeters and spends most of its time on treetops. They always live in groups of three or four individuals because it makes hunting for insects easier. They prefer to eat small flying insects and are mostly found in coastal areas and woodlands across the country. The color of this amazing creature is completely grey with black stripes on its wings. 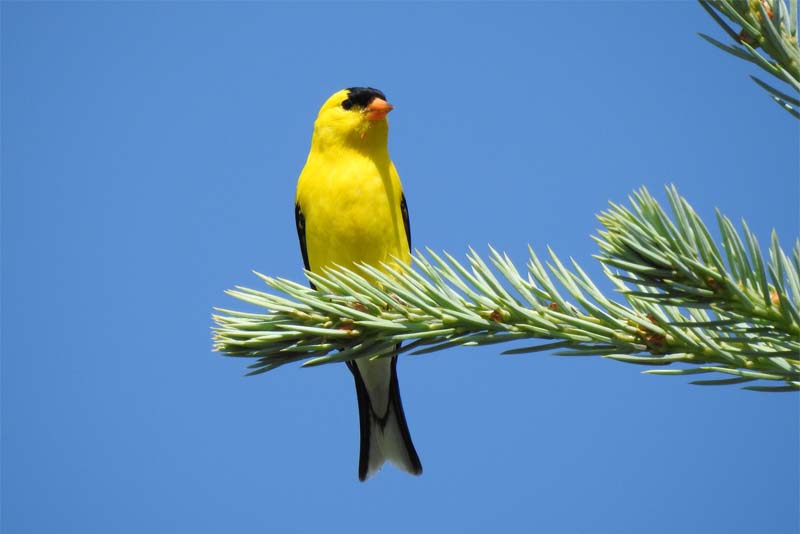 American Goldfinch is mostly found in the United States and has three states – Washington, Iowa, and New Jersey. Their size is small and usually lives in flocks. They can grow up to 14 cm in length with a weight of 20 grams. They are highly famous migratory birds and during the winter they migrate from the Northern United States to Mexico. They actually move to North Carolina for the breeding sessions and an interesting thing about them is that during different seasons, their calls and songs are different. The color of this amazing creature is bright yellow except for the forehead, tail, and wings which are black. The color of females is the same but actually, it is duller than the male. 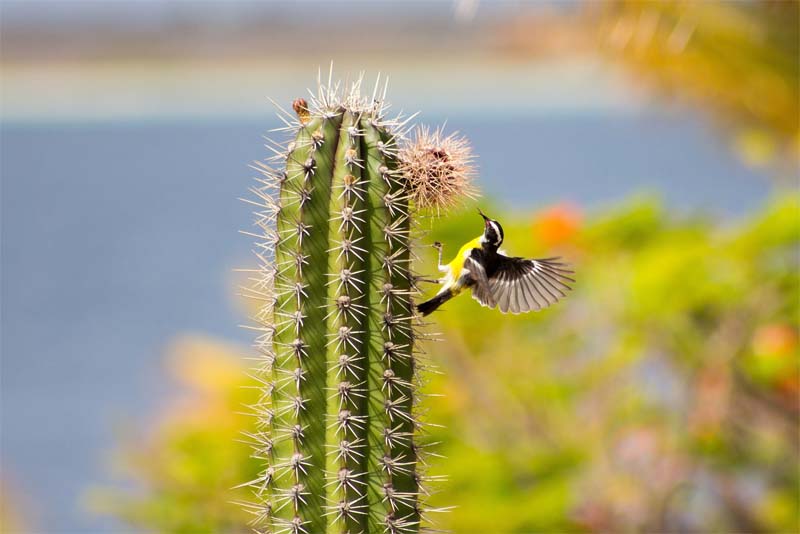 Bananaquit comes at number 8 on the list and is found in South and Central America. The beautiful family of bananaquits consists of 44 different species. Their size is in between 10 and 13 cm and they can be differentiated by slight differences in coloration and morphology. In general, they consist of a blackish back with a yellow underbelly and the curved beak is perfectly suited for sucking nectar from different flowers. Nectar and small insects are the main diets of this amazing creature.

This cute creature is mostly found in the Southern United States and Mexico and is one of the most adorable and smallest birds in North America. There are about 14 different beautiful species of the parula. Each bird species has slightly different coloration. The color of a male is actually brighter than the female. The whole body of a male has different color variations. The head and back of this tiny bird are bluish in color while the underparts are pale yellow. The parula mostly feeds on berries, insects, and seeds. It comes at number 9 in this list.

This distinctive and astonishing tiny bird is endemic to Australia. Its length is about 13 centimeters and weighs up to 13 grams. As per the name, the male birds have a crimson head and chest while females are less brightly colored with pink and brown plumage and they use their strong and powerful legs to hop around and walk. The bird usually prefers drier areas and grasslands.