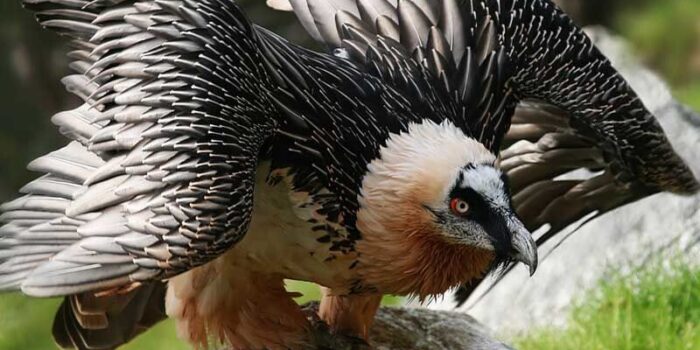 To discover the sky is the dream of every human and in the nature birds are such organisms which discover the sky by flight. To fulfill the dream of flight man-made airplanes which travel up to the altitude of 30000-40000ft. Some birds can easily reach such high altitude. Here is the list of 10 highest flying birds in the world: 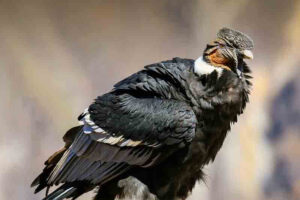 Andean condor is a huge raptor live in the high peaks and grassy plains across South America. It is a large flying bird, weigh up to 15 kg and wingspan is up to 10 feet 6 inches. They have the longest wingspan of any bird in the world and they love to glide in the wind. The maximum height of flight reported is 15000 feet.

Andean condor is also considered a symbol of power, freedom, and health. It is also the national bird of many countries like Bolivia, Columbia, Chile, and Ecuador. Unfortunately, the royal Andean condor is an endangered species because of over-hunting and habitat loss. Andean condors are scavengers that mainly feed on flesh. They have tremendous eyesight and could spot carrion easily while gliding high in the sky. Due to the presence of sharp hooked beak and powerful claws they can easily collect meat from carcasses. 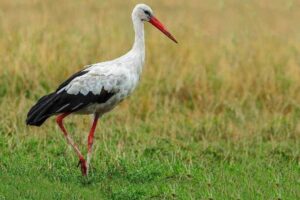 White stork is a popular paddling bird that known for its distinguishing long neck that measures up to 45 inches and a wingspan of 2.3 meters. They live in warmer areas across Europe and West-central Asia. White storks are sturdy migrant birds. In winter they migrate to tropical Africa and during migration, they form large flocks that comprise thousands of members. Their maximum altitude reported is 16000 feet. 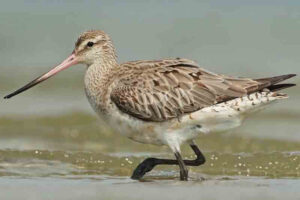 Bar-tailed godwit is a sturdy migrant, a large roving bird with a characteristic long bill. They spend winter in Australia and New Zealand but breed in Alaska and Siberia. Bar-tailed godwits are also famous for longest non-stop migrant. During their journey from Alaska to South, bar-tailed godwits cover about 11000 kilometers without rest. These astounding birds cover such long path in just seven or eight days.

The maximum height of Bar-tailed godwits recorded is 20000 feet during flight. Their length lies between 14-16 inches and a maximum wingspan of 31 inches. Comparison with other species of birds reported that the bar-tailed godwit consumes very less energy from the body. They have an aerodynamic body shape so they feel less air resistance. 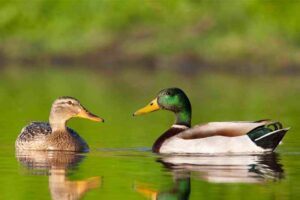 Mallard is a type of migratory wild duck inhabit in North America and Europe. These ducks are prominent for their iridescent-green head and bright yellow bill. When winter is going to be initiated these ducks migrate to the South where the temperature is moderate. Mallard ducks mostly flight at an altitude of 1000-4000 feet but they are also famous to fly at 21000 feet. 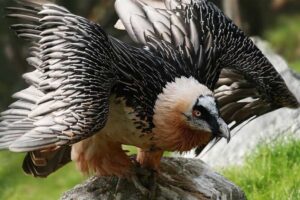 Bearded vulture is a huge species of vulture that dwell in hilly areas of Southern Europe. Their weigh lie between 5-7 kg and a wingspan of 2.5-2.7 meters. The robust, large wings help them to soar high above mountainous areas. They have the ability to fly at an altitude of 24000 feet above the ground. Bearded vultures also called ‘bone-eater’ because they entirely feed on carcass bones. They swallow small bones by the whole as their stomach has acid which can easily digest the bones. 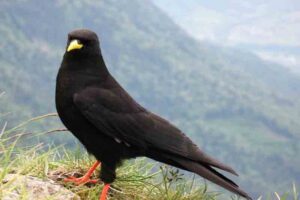 Alpine chough is a medium-sized mountain-dwelling bird reported to live in the high mountains of Southern Europe and Central Asia. They are also identified as yellow-billed chough, named after their bright yellow bill. They are the highest nesting bird in the world and can be built a nest at an altitude of 21300 ft. Alpine choughs are flawlessly adapted to live in thin atmosphere. Alpine choughs are prominent for their astonishing flight skills. They definitely fly around high peaks of the Himalayas. The maximum height recorded of this mountain-dwelling bird is 26500 feet. Alpine choughs can fly at high altitudes, even in winter. 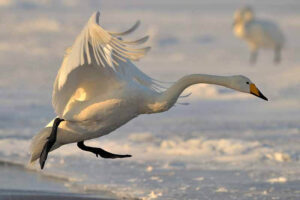 ‘Whooping’ calls is the specialty of Whooper swan. They are large migratory birds and inhabit in flooded grasslands, wetlands, tundra, lakes and ponds of Southern Eurasia. They are famous for their long neck and yellow and black bill. During winter, the whooper swans migrate to Denmark, Germany, and Britain.

They form large flocks that contain thousands of individuals during migration. They fly in ‘V’ shape during their flight to wintering grounds. Whooper swans commonly fly at an altitude of 8000 feet during migration but their maximum height recorded is 27000 feet from sea level. 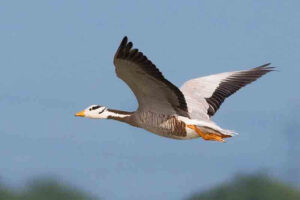 Bar-headed goose known to be migrating bird that can fly at the height of 29000 ft, higher than Mount Everest. Bar-headed geese are inborn to Central Asia. They have the ability to fly over the Himalayan peaks where air pressure is intensely low. Bar-headed geese have higher lung capacity as compared to other geese. The reason for high lung capacity is they have more red blood cells and can also escalate the cardiac output in flight.

Bar-headed geese are entitled after two dark bars around their head. They reside in high altitude lakes across Central Asia. Bar-headed geese migrate to the South in winter. During migration, they can cross a distance of 1000 miles in a day. 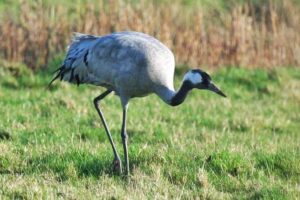 Second highest flying bird recorded is a common crane. They can fly at the height of 33000 meters and seen across the Himalayas. Common cranes are also recognized as Eurasian crane because they live in Northern areas of Europe and Asia. Their wingspan lies between 1.8-2.4 meters. They are a long distant migrant and spend winter in Northern Africa. During migration, they form a large ‘V’ shape.

Ruppell’s griffon vulture is the highest flying bird as recorded flight altitude is 37000 ft. At such high altitude, the presence of oxygen is very low as compared to the ground but Ruppell’s vulture’s body contains a special type of hemoglobin which makes the oxygen intake more efficiently.

Ruppell’s griffon vulture belongs to the vulture family. The approximate length is 1 meter and weighs lie between 7-9 kg. The recorded wingspan of Ruppell’s vulture measure between 2.3-2.5 meters. Their flight speed is 22 mph and can halt in the air for hours. Ruppell’s vultures are scavengers and spot carcasses from great altitudes as they have sharp eyesight