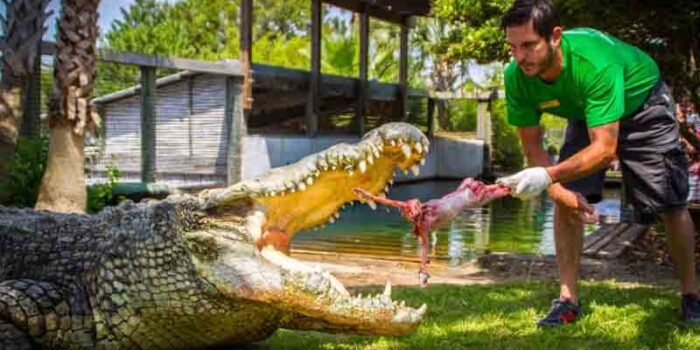 Crocodiles belong to class Reptilia and live in tropical regions i.e. Africa, Asia, America, and Australia. They are bigger animals but still, they face the problem of big fish stories and over-exaggeration. Here is the list of largest crocodiles in the world: 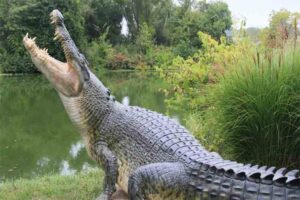 Gomek was the seawater crocodile measuring 17.78 feet long and weighed 860 kgs (1896 lb). George Craig captured it in New Guinea. He was bought by Terri and Arthur Jones in 1985 and was kept in Ocala Florida for five years then it sold to St. Augustine Alligator Farm Zoological Park in Florida. For 8 years he wowed audiences with both his wonderful nutria-tossing abilities and his even more remarkable acceptance of people. Feeders used large tongs to feed Gomek, he was generally known to be a “tame” crocodile and was the favorite of the Alligator farm and people around the nation.

Gomek was died by heart disease on March 6, 1997. At that time, he was a very old crocodile, and one of the largest and tamest captive crocodile in existence. When he died, his length was 5.42 meters (17.8 ft) and weight was 860 kg (1896 pounds) – as confirmed by St. Augustine Alligator Farm – and possibly between 60 and 80 years old. There is a compliment to Gomek near his arena, which now houses his successor Maximo and his mate Sydney.

Read also: 10 Largest Birds You Should Not Miss 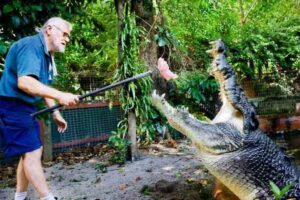 This Australian saltwater giant has been claimed as the largest crocodile seized in captivity and was known by the Guinness World Records as the world’s largest crocodile in captivity in 2011. He is missing his front left leg and tip of his tail due to venomous fights. He exists in Marineland Melanesia on Green Island in Australia. He was caught in 1987 by Mr. Craig in the Finis River in the Northern Territory after attacking boats and causing an annoyance. After the capture of Cassius, Mr. Craig spent 30 years with the gigantic reptile and fed him every day.

Read also: 10 Deadliest Fishes that can be dangerous for humans 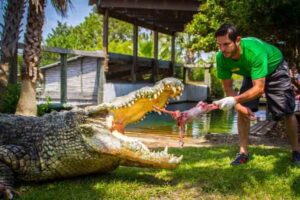 Utan at present lives in Alligator Adventure, one of the World’s biggest reptilian facilities. Utan is a crossbreed between saltwater and Siamese crocodile. He is born in 1964, weighs like 2000 lbs and is just over 18 ft in length. Utan is found at Samut Prakan crocodile farm, which is almost twelve miles outside of Bankok, Thailand. He was named by the name of farm owner’s son, Utan Young Prapakarn. He currently lives in Alligator Adventure, a reptilian facility located next to Barefoot Landing in North Myrtle Beach, one of South Carolina’s most amazing tourist attractions.

Although Utan’s bite force has never been experienced, it is said to be estimated at about 5000 lbs. of weight per square inch, more than two tons!

Read also: 10 Most Romantic Animals in the World 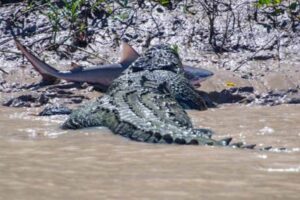 Brutus the massive crocodile is a tourist attraction on the Adelaide River in Australia. This gigantic saltwater crocodile named “Brutus” has only three limbs! It is recognized to frequent the Adelaide River, Northern Territory, Australia. Brutus is misplaced his front leg following what is believed to have been a confrontation with a bull shark in the river’s estuary – leaving many people to wonder just how big the shark was.

Brutus is conventionally estimated at 5.6 meters (18 feet 4 in) and weighing about a ton. 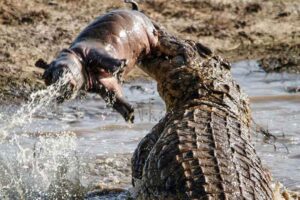 Bujang Senang was a gigantic saltwater crocodile and it was living in Borneo. According to the native sources, he was a man-eater (some people even claimed that he had been around and killing for at least thirty years). Initially, he was estimated at 25 feet (7.62 meters).

Bujang Senang was killed on May 20, 1992. After the kill, it turned out that his length was miscalculated. He was 19 feet 3 inches in length (5.88 meters) and weighed over a ton. The skull of Bujang Senang is placed at the Sarawak Museum (Kuching, Malaysia). 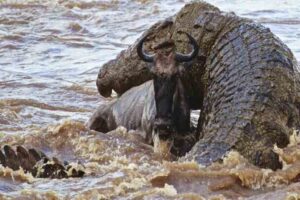 The most terrifying beast ever is a man-eater named “Gustave”. It is a large male Nile crocodile from Burundi and is thought to have killed as many as 300 humans from the banks of the Ruzizi River and the northern coasts of Lake Tanganyika.

A herpetologist Patrice Faye, who has been learning and inspecting him since the late 1990s gave it the name Gustave. Mostly knowledge about Gustave stems from the film capturing the Killer Croc, which aired in 2004 on PBS. The film documents a capture effort and study on Gustave.

Gustave has not been captured so his exact length and weight are indefinite. In 2002 it was stated that he might be “merely more than 20 feet (6 meters) long”, and weigh more than a ton. Some estimation has put Gustave at 7.5 meters (25 feet) or more in length. When first witnessed, he was estimated to be around 100 years old in order to achieve such outstanding size; however, Gustave revealed a complete set of teeth when he opened his mouth. According to the documentary a 100-year old crocodile “should be approximately toothless” so, he was estimated to be “probably no older than 60 and likely, still growing”.

Gustave has three bullet scars on his body. His right shoulder blade was also found to be intensely wounded. Circumstances surrounding the four scars are indefinite. Herpetologists who have studied Gustave claim that his unusual size and weight impedes his capability to hunt the species’ usual, agile prey such as fish, antelope, and zebra, forcing him to attack larger animals such as hippopotamus and, to some extent, humans. According to a native warning, he is said to hunt and leave his victims’ corpses uneaten. Also, it was stated in his documentary film that since crocodiles can go a number of months without eating, one the size of Gustave could afford to select his prey carefully.

Gustave was last time sighted in February 2008 by National Geographic sources. According to Wikipedia, one resident claimed that Gustave dragged an adult bull buffalo on a riverbank, in June 2015. That claim is under “citation needed” status.

National Geographic Channel created a documentary with the title of “Capturing the Killer Croc” which followed a team led by Patrice Faye that tried to capture Gustave but was unable to do so. 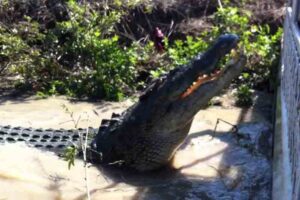 Dominator, the marine water giant has never been publicly measured but it is estimated that he measures up to 20 feet (6.1 meters) and weighs over a ton. He shares the same zone with another saltwater giant Brutus (Adelaide River, Northern Territory, Australia).

Read also: 10 Most Dangerous Bugs in the world 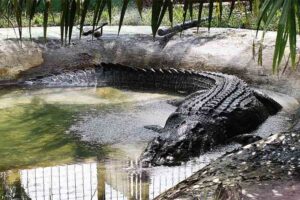 Lolong was an Indo-Pacific or marine water crocodile (Crocodylus porosus). Australian crocodile expert Dr. Adam Britton measured Lolong in his arena in November 2011 and confirmed him as the world’s longest crocodile ever caught and placed in captivity.

He was trapped in a Bunawan creek in the province of Agusan del Sur in the Philippines on 13 September 2011. He was netted with the joint cooperation of the resident government unit, residents, and crocodile hunters of Palawan. The giant crocodile was captured over a period of three weeks; once it was found, it took around 100 people to carry him onto land. He became violent at several points during the capture and twice broke preventive ropes. He was expected to be at least 50 years old.

Lolong was supposed of eating a fisherman who went lost in the town of Bunawan, and also of consuming a 12-year-old girl whose head was found two years earlier. He was also the primary suspect in the missing of seahorses in the area. In the examination of the stomach substances after his capture, remnants of water buffaloes reported missing before Lolong’s capture were found, but there were no human remains.

The crocodile was named after Ernesto “Lolong” Goloran Cañete, one of the veteran crocodile hunters from the Palawan Crocodile and Wildlife Reservation Center, who lead the hunt. After weeks of trailing, the hunt for Lolong took its toll on Cañete’s health. He died by heart attack some days before the crocodile was captured.

Lolong was reported dead in captivity just 18 months far along he was captured, at around 8 pm on 10 February 2013. His necropsy revealed that he died from congestive heart failure compounded by fungal pneumonia, lipidosis of the liver and kidney failure. 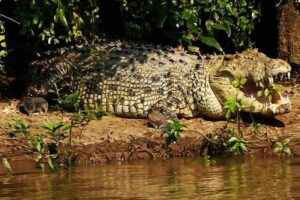 It gives the impression the Guinness World Record book has accepted a claim that a 23 ft (7.01 meters) giant male saltwater (named Kalia) crocodile weighing 2,000 kg lives within (Bhitarkanika Park) the state of Orissa, India, but because of the problem in capturing such a large monster, the precision of the measurement is yet to be verified. There’s also no photo at yet. 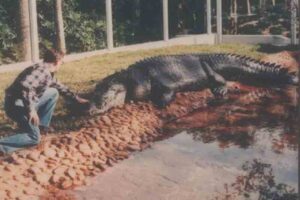 According to a story, a massive crocodile was shot in July 1958 near Normanton, Queensland, Australia. It was named Krys after the person who shot it. It was supposed as 28 foot 4 inches (8.64 meters). The claimed size of Krys is highly mysterious because it is much larger than any other precisely reported measurements.

The replica of Krys placed at Normanton, Queensland, Australia. The claimed size of Krys is highly mysterious because it is much larger than any other accurately reported measurements. And, probably, this “life-size replica” isn’t very precise, too. Zoologist and crocodile expert Adam Britton sedate the replica’s head in June 2017 and found that its head-body ratio is not appropriate. Krys the Crocodile statue in Normanton, supposedly a life-size representation of a 28 ft (8.6 m) saltwater croc that Krys Pawlowski shot on the Norman River.