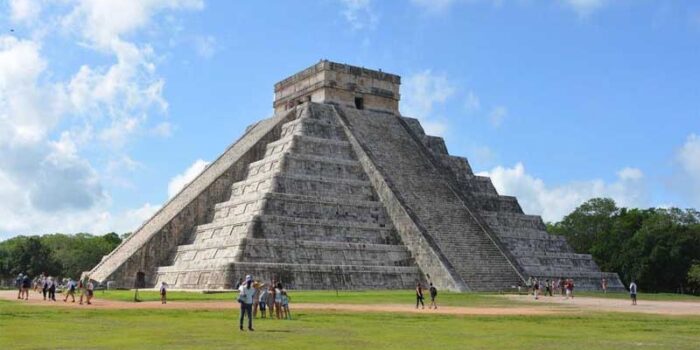 Mexico is a wonderful country and they are very famous because of its amazing history and beautiful culture. Pyramids basically show the culture and history of Mayan people. We also see many of these Pyramids in different famous documentaries and movies. People from all over the world admire the elegant beauty of these archaeological buildings.  Mexico is the city beautiful sceneries and exotic places.  These notable Pyramids actually represent their planetary and animal gods.  These stunning buildings are the reason behind the fact that Mexico is one of the most visited countries in the world.  Following are the 7 most famous and wonderful Pyramids that exist in Mexico.

Pyramid of the Niches is the most visited and well-known building in the city of El Tajin.  This wonderful place is 20 meters high and has seven marvelous storeys. The whole look of this pyramid is stunning and also has a wide staircase at its eastern side.  Because of its unusual design, this archaeological site is very popular among tourists.  Numerous temples, Pyramids and ball courts were built in El Tajin in ancient times. In 1992, El Tajin was named as World Heritage site because of its cultural importance and unique architecture. 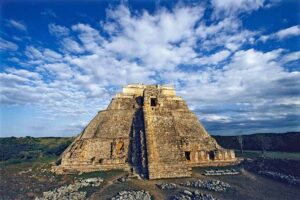 Its structure is tallest and most recognizable in Uxmal. Uxmal is extremely popular and one of the largest cities on the Yucatan Peninsula.  This exciting place is also referred to as the Pyramid of the Soothsayer. Basically, it is located in the Puuc region of Mexico and has a height of 40 meters and a width of 81 meters. Actually, it is among the few buildings that exactly shows the astronomical knowledge of Mayan culture. The most amazing thing about this Pyramid is that it also aligned with reference to the planet Venus. Its rounded sides, steep slope, unusual elliptical base, and considerable height make this Pyramid even more unique. It marks its name at no 2 in the list of wonderful Pyramids.

3. THE PYRAMID OF THE MOON, TEOTIHUACAN 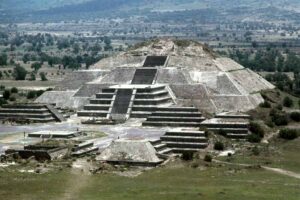 It is highly famous and the second largest pyramid of Teotihuacan, Mexico. It has a unique structure and its structural building is older than the Pyramid of the Sun. It is basically located in the ancient city of Teotihuacan which is also famous with the name of the city of the Gods. It is in the western part of the city of Teotihuacan. People from across the world came to watch these amazing sights. The interesting part of this historical building is that the storeys are layered on top of one another and each layer contains burial chamber.

4. THE PYRAMID OF THE SUN, TEOTIHUACAN 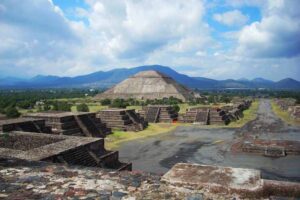 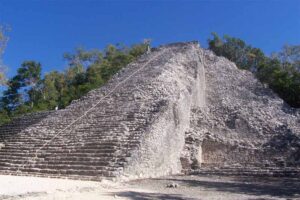 It is the most important archaeological structure at Coba. According to Archaeologists, Coba is one of the most supreme and important ruin sites on the Yucatan Peninsula. The meaning of Nohoch Mul is ‘’great mound’’ which is actually the most famous and tallest Mayan pyramid on the Yucatan Peninsula with a height of 42 meters. Visitors from across the world came to see this unique archaeological structure and they have to climb 120 steps for panoramic views of the entire site. With seven levels with rounded corners, it comes at number 5 in the list. Coba is basically located around two extremely popular lagoons the first one is Lake Coba and the second is Lake Macanxoc.

As per Archaeological evidence, this wonderful place known as Coba was first settled between 50 BC and 100 AD. After 100 AD the growth of population increases in the area around Coba.

6. THE GREAT PYRAMID OF CHOLULA 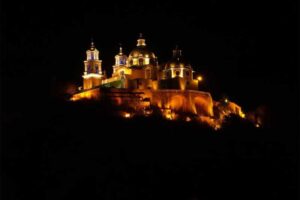 Another masterpiece in the list located in Cholula, Mexico.  This huge complex stands 55 meters above the surrounding plain. Its name has been taken from the ancient word cholollan. The meaning is “place of refuge”.  It is unique from others because it basically consists of six superimposed structures with staircases forming their way. This temple also has great value among people because it is an important religious and mythical center in prehispanic times. This historical and huge complex was built in four different stages. According to the Guinness Book of Records, it is not only the largest pyramid but also the largest monument ever constructed anywhere in the world. With the height of 66 meters and a base of 450 by 450 meters, this unique building comes at number 6 in this list. 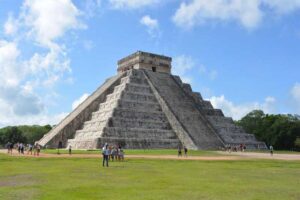 One of the most amazing and beautiful Ancient Mayan Temples, El Castillo is also known as the Temple of Kulukan. It is basically a Mesoamerican pyramid within the center of the Chichen Itza. The whole structure was brilliant and is twenty-four meter high with a base of 55.3 meters. The amazing thing is that an extra six meter is also available for the temple. This historic building is served as a temple of God kukulkan. Basically, it is a part of the Pre-Hispanic City of Chichen-Itza. The entire structure is brilliant and contains a series of square terraces with stairways up each of the four sides to the temple on top.

10 Most beautiful bridges in the world

10 Strangest Buildings That Will Amaze You