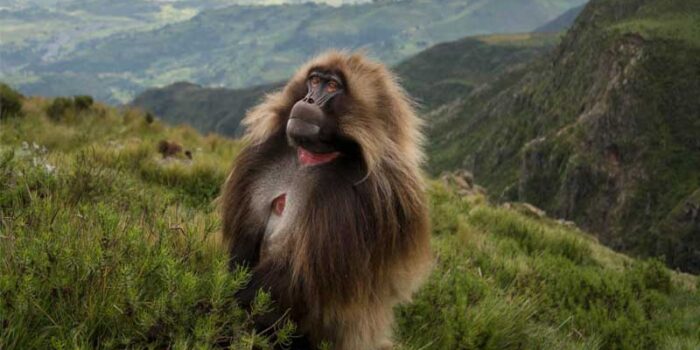 Monkeys are famous for their unique looks and funny nature. But it doesn’t mean that they never become angry. If you irritate or disturb them then they will become angry and will attack you. Monkeys have a strange appearance, it’s up to people how they treat them. Some people think monkeys are cute and some thinks they are weird. Everyone has their own point of view. But in this article, we are going to discuss weirdest looking monkeys.

Due to its strange and weird look, a lot of people get scared of it. Gee’s golden langur comes at number 10 in the list of weirdest looking monkeys. They have a small black face peering out from gold and rust. Sometimes they also come with cream-colored fur. This weird looking monkey is found in a small region of western Assam, India. As compared with males the coats of females are lighter.

Gee’s golden langur has long tail measuring up to 50 cm in length. The interesting fact about them is that the color of their fur changes according to the seasons. You mostly found them on top of big trees. Climbing on high trees is actually a very difficult task to perform but in this case, their long tail helps them a lot. This weird looking monkeys tail actually serves as a balancer when it leaps across branches. Their diet includes different ripe unripe fruits, seeds, flowers, buds, mature and young leaves. 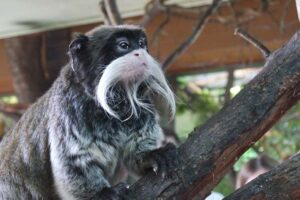 Emperor Tamarin lives in Central and South America. The color of their fur is grey with yellowish speckles on its chest. It has black hands and feet and the tail is brown. Its long white beard actually gives it the weirdest look. This unique animal can reach the length of 23–26 cm and weighs approximately 500 grams. They are very active and have a playful nature. They are very social and interactive with humans and show good behavior with them. 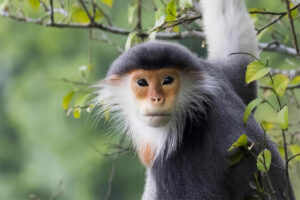 Red-shanked douc is extremely famous for its amazing color varieties. This colorful creature is actually a species of Old World monkey. It comes at number 8 in the list of weirdest looking monkeys. The interesting fact about this unique animal is that it sleeps and eats in the trees of the forests. Mostly found in Indochina, Southern Laos, Vietnam, and possibly Northeastern Cambodia.
The average body length of the male is 61 cm and females are 54.5 cm long with a long tail that measures up to 55.8–76.2 cm. The males are 11 kg in weight and females are 8.44 kg. It is also considered as the most colorful monkey among all the primates. Red-shanked douc is also known as “Queen of primates” due to their unique and distinctive appearance.

This weird-looking animal comes with a striking appearance. As it has white forearms, upper legs black to grey and deep red lower legs. Interestingly, its soft face and almond eyes are also colorful. Its yellow-orange face and ears are very attractive. It looks like someone has done makeup on its face. Their behavior is the same as other monkeys, very social and lives in groups. Generally, each group contains 4 to 15 members, but groups of up to 50 have been recorded. 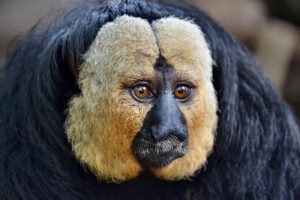 Its face looks like it is wearing a mask but actually not, its a bear in disguise. It’s extremely famous for its unique and distinctive appearance. This unique animal can be found in French Guiana, Suriname, Brazil, Guyana, and Venezuela. You will mostly found them in the understory and lower canopy of the forest. Their diet includes fruit, seeds, insects, and nuts. They have the ability to travel longer distances than many other primates. 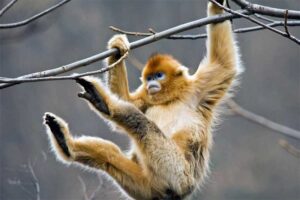 The Golden snub nose monkey marks its name at number 6 in the list of weirdest looking monkeys. It prefers to spend most of its time in the mountainous forests around China. Generally, they are small in size with soft, golden fur and a tiny snub nose. This unique animal thrives in cold weather. They are very powerful and also capable of chasing off larger predators like leopards and other fierce animals.

They are very shy in nature and often referred to as “swamp monkeys” and usually avoid other monkey species. They are also among the weirdest looking monkeys because of their strange appearance. This unique animal is quite brilliant at camouflaging themselves when needed. 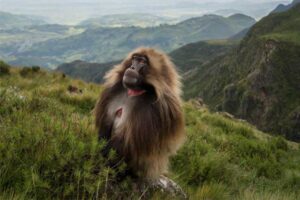 This weird-looking animal is often referred to as a baboon but the, in reality, it is not a baboon itself. They are only present in Ethiopian Highlands, with huge populations in the Semien Mountains. It spends most of its time in foraging in grasslands. Its whole body is covered with a buff to dark brown hairs. Its face is dark with pale eyelids. The color of arms and feet is black. 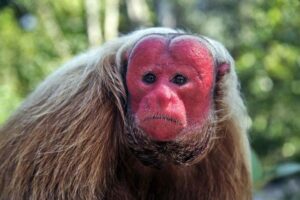 It is unique among all the species and comes at number 3 in the list of weirdest looking monkeys. It has a very distinctive and striking appearance with an attractive bright red face and small bald head. The intelligence level of these small primates is very high. They are very much social and have strong and powerful jaws. 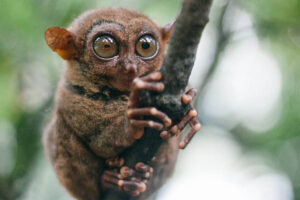 This unique tarsier resembles lemur due to its strange, long twig-like fingers and large bulging eyes. Actually, it is nocturnal and has high-pitched beautiful voices which they mostly use for singing. The interesting fact about Tarsier is that they can’t walk, so that’s why they are they’re forced to hop around. If someone disturbs or irritate them by a loud noise and unwanted touching they will commit suicide by banging their head on a hard surface. 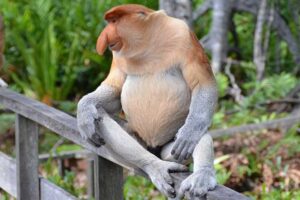 Proboscis Monkey is leading the list of weirdest looking monkeys and is extremely famous for its unique and distinctive over-sized nose. People also make fun of its large nose but it is actually used to warn of its potential predators and attract mates by making a huge bellowing noise. Despite having a bigger nose they are also good swimmers.