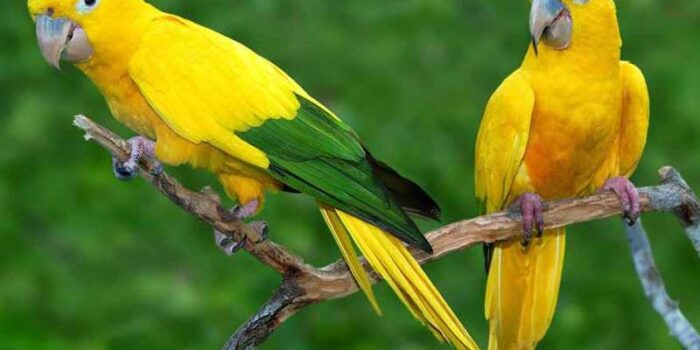 There are different parrot species that are famous for their intelligence level. As we all know parrots are among the most beautiful birds in the world. You will find different types of parrots in this world. Not only beautiful, but they also contain different fantastic characteristics. They have great skill in learning, and the most interesting thing about them is that they can mimic humans as well. However, the whole body of parrots are adoring and eye-pleasing but their delightful plumage is something that can’t be defined with words. The plumage is the most famous part of these species. Following is the 10 different parrot species that will amaze you. 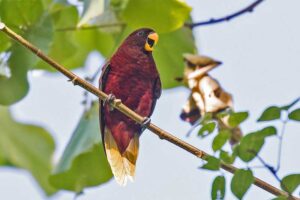 This parrot belongs to the beautiful island of Pohnpei and the close-by Ant Atoll in Micronesia. In Pohnpeian, it is famous with the name of SEREHD. This incredible parrot species is 24 cm in length and weight is approximately 80 grams. Its reddish-maroon plumage with a slightly darker maroon head is its most striking feature. The both male and female have a different striking appearance and can be easily distinguished with the color of the beak. The color of the male beak is orange and female has a yellow beak.

Both male and female contain beautiful colors that will definitely attract people. This beautiful creature prefers to live in tropical moist lowland forests and plantations. Their diet consists of nectar and pollen from coconuts and they also eat fruit and insect larvae. No doubt it is one of the beautiful parrot species living in this world. 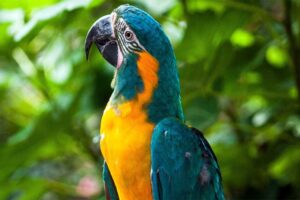 BLUE-THROATED MACAW comes at number 2 in the list of different parrot species. But this amazing parrot has a great value and is listed among beautiful parrots species because of its striking and pleasing color compositions. This beautiful creature is mostly found in Northern parts of Bolivia. Its weight is about 900 grams and is 85 cm long. Their diet consists of fruits from large palms. 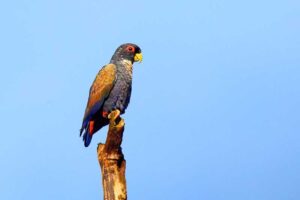 This medium-sized parrot is native to forests and woodland in north-western South America. They prefer to fly with teams and that’s why mostly they are seen flying with small teams of 10 birds. They mostly came with dark color with a very attractive whitish chin patch. Their upper chest is also very adoring because it is beautifully decorated with pink feathers.

Their appearance is different from other species because of their dark blue-green head. The unique pale yellow beak is one of the most striking features of these species. 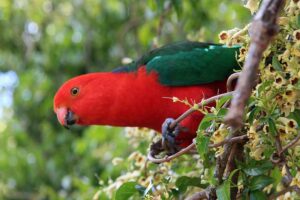 This beautiful creature was seen many times in different parts of continent Australia right from Cooktown in Queensland through to Port Campbell in Victoria. They are among those parrot species who love to pass their life in humid and dense forests lies in the eastern portions of the continent. They actually gathered different seeds and fruits directly from the trees and also pick up that are fallen on the grounds. This beautiful creature is approximately 43 cm long including its long tail.

They prefer to move with small groups mostly along with different species of rosella. Many people kept them as a pet but actually, their talking ability is limited and also handling them is not a very easy task to perform. You just can’t keep them in one place, they continuously disturb you. So keeping them as a pet might not be a good option. But the amazing thing about them is that they easily make a bond with people and can become a good friend. Their life span is still unknown in the wild but some pets are known to be lived up to 25 years. 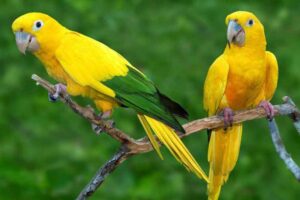 Another medium size parrot is in our list of different parrot species, native to Amazon basin of northern Brazil. Bright yellow plumage with green remiges is its most striking features. The bad news is that this beautiful creature is threatened by deforestation and flooding. Its appearance is very loud and attractive. Mostly it was seen with green outer wings and is 34 cm long.

GOLDEN PARAKEET is among the most social parrots you have ever seen. They love feeding and sleeping. The other interesting thing about them is that they can even breed together. Their favorite food is mango, acai flowers, seeds, Murici, and buds. It is extremely famous and people across the world pay a lot of money to get this parrot.