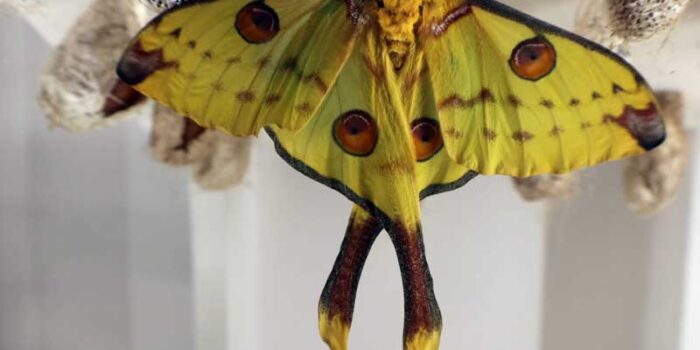 Butterflies and Moths both belong to the same insect group called Lepidoptera. Butterflies are very famous among people and usually, they receive most of the attention. There are 180,000 species present in this group known as Lepidoptera. Surprisingly among these 180,000 species, only 10 percent are butterfly species. Their beautiful coloration attracts every eye. But did you know that Moths are equally beautiful as Butterflies? Following is the list of 10 of the world’s most beautiful moths. 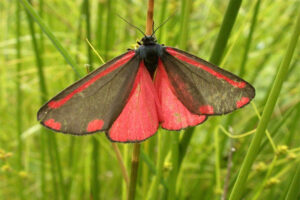 Cinnabar is one of the most beautiful moths mostly found across Europe. They are extremely famous for their bright colors present on their body. They have elegant red markings on their forewings and scarlet hindwings. You will find this amazing creature in meadows, downlands, and wastelands.

The poisonous ragwort leaves are their main food. They actually warn their potential predators through the bright color of larvae. This beautiful moth species have a body length of up to 30mm and an adorable wingspan between 35 and 45 mm.

This attractive large silk beautiful moth comes at number 9 in this list. This beautiful species is found across America. The length of its wingspan is 15 cm. The unique thing about their wings is that they are lengthy and colorful with adorable shades of red, brown, and grey. The most amazing feature of this amazing creature is its striking eyespots. You can easily identify Polyphemus through its attractive eyespots which are present on both fore and hindwings.

The hindwing eyespots are usually large in size and are yellow in color with black white rings. The color of forewings eyespots is also yellow but they are smaller in size. 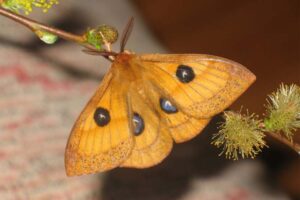 You will find this gorgeous and beautiful moth across Eurasia. The wingspan of this moth species is between 60 and 84 mm. Males are easily visible in the daytime but females only active a night. The beautiful coloration of their wings attracts every eye. The wings are basically mixed with beautiful light brown and white colors. 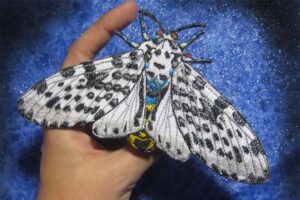 This moth species is very famous for its beautiful coloration. Giant Leopard marks its name at number 7 in the list of most beautiful moths. This amazing creature is also well known with the name of eyed tiger moth and has impressive size. It has 2 inches of body length and a wingspan up to 3 inches. They mostly live in woodlands, gardens, and farmlands across America. 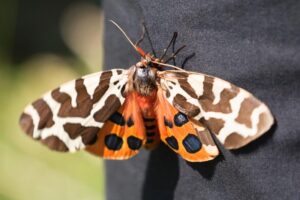 Another beauty of nature marks its name on this exciting list. They well known for their eye-pleasing colors and are found throughout Eurasia and North America. They contain a lot of striking features but its orange hindwings with many black spots are the most prominent feature among all.

They have white forewings with adorable black markings. Their elegant coloration and attractive patterns on hindwings seem to be very appealing. But actually, they are warnings to their predators. They display their colorful hind wings when they feel any threat to their life.

Hummingbird is the most stunning and attractive member of the hawk family. There are 1450 moths species that exist in this unique family. The reason behind their name is that their feeding behavior is the same as hummingbirds. Like hummingbirds, they also hover over flowers and make similar ‘humming noise’.

They spend their lives in grasslands, gardens, woodlands, farmlands, and forests across Europe, Asia, Russia, and Africa.  They basically contain a large wingspan of 50-58 mm. The color of their forewings is grayish-brown and the color of their hindwings is orange. 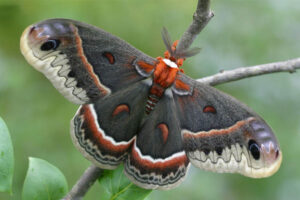 With an elegant wingspan of 5-6 inches, they are the largest moth of North America. They are extremely famous for their large size and stunning coloration. With the radish body, brown wings with bands of white and tans they are one of the most beautiful moths living in the world. They are native to the Rocky Mountains of the United States and Canada. 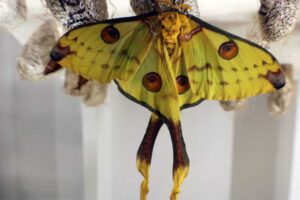 This amazing creature is native to the rainforests of Madagascar. It is the well-known largest silk moths living in this world. People also knew this species by the name of comet moth. Its long red tail is the most prominent and attractive feature which actually measures up to 15 cm. They also have a large wingspan measure up to 20 cm. The color of their forewings and hindwings are yellow. 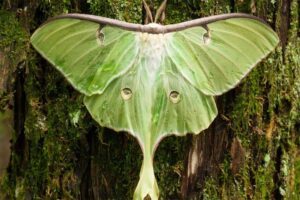 The whole body of this amazing creature is covered with striking colors. They live in deciduous hardwood forests of the United States, Mexico, and Canada. Their wingspan has an impressive length of 4.5 inches. Both its size and coloration are very impressive and eye-catching. They contain green colored wings along with striking eyespots present on both fore and hindwings. 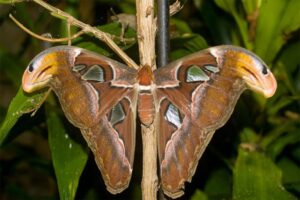 Atlas comes at the top of the list of most beautiful moths in the world. They have a wingspan of 11 inches and a surface area of 62 square inches. They are mostly found in tropical and subtropical forests of Southeast Asia.