The biggest church builds around the world amazingly represent super architectural styles. A top quality material was used in the construction of these large churches. There are many largest churches present in this world, but we bring you the most famous largest churches, based on floor area covered by the building.

Top 10 Churches in the World 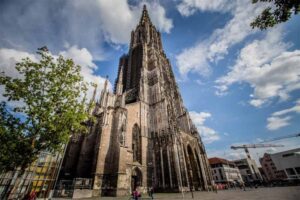 With the height of 161.5 m, the Ulm Minster is among the largest churches in the world. The whole structure of this large church is a piece of art and is located in the Ulm city of Germany. Its internal area is 8260 square meters. This masterpiece is a great example of Gothic church architecture. The top of the church is amazingly built and there are 768 steps to reach the top. From the top of this big church, you can the magnificent and eye-pleasing panoramic view of Ulm city.

Basically, its construction began in 1377 but was stopped for a long time. But the construction started again and at last, it was fully completed on 31st May 1890. Today, this large building is actually a protestant church, converted in the 16th century. Its tall spires actually symbolize the way to heaven.

Ulm Minster contains much amazing attraction but the most notable attractions are its choir stalls. The choir stalls were beautifully sculpted by the most popular German sculptor Jirg Syrin the Elder.

9. Basilica Of Our Lady Of Pillar, Aragon, Spain, 8318 square meters 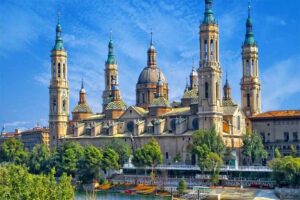 The  El Pilar basilica comes at number 9 in the list of largest churches in the world. This big church has a great history, it is the first ever church dedicated to the Virgin Mary. According to hypothetical believes, Virgin Mary appeared to Saint James ( Apostle of Jesus) at that time he was in prayer on the bank of Ebro river in Iberian Peninsula of Spain.

The Virgin Mary gave a statue of herself to Apostle Saint James and instructed him to build a church. The statue was made up of wood and a pillar. The Apostle Saint James followed her instructions and built a small church in Zaragoza province in 1st century A.D.

Today’s model of this amazing church was built in the 17th century. It was renovated by the famous Spanish architect Ventura Rodriguez. In the 20th century, The pillars of the church were completed. The whole site and structure of this large church is so adorable and appealing and has great value among all the Christians. It is also among highly visited churches.

This big church has an internal area of 8318 square meters. There are four elegant and impressive towers of this magnificent church. There are eleven cupolas in this historic building. The Statue of the Virgin Mary is present in the holy chapel of the church. The statue is 15 inches tall and has great importance. People from across the world came to see this statue. That’s why El Pilar cathedral is one of the most famous and visited pilgrimage centers in Spain. 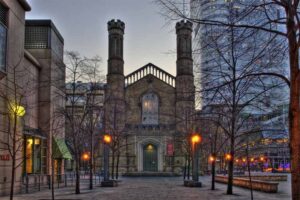 It is the most popular and largest church in Portugal. This masterpiece is located in Santarem district of Portugal. It contains a modern oval design which is very attractive. With 8700 square meters of internal area, this big church has the capability to accommodate 9000 worshipers at a time.

It is also dedicated to the Virgin Mary and was built between 2004 and 2007. The Greek architect Alexandros Tombazis actually built this piece of art. It also houses many chapels and 44 confessionaries. 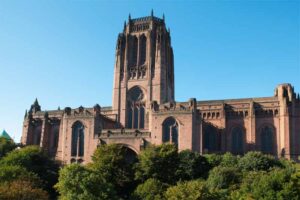 Its construction was started in 1904 but completed in different phases in history. Finally, it was consecrated in 1978. Inside this magnificent church, the main altar is present in a circular design.

The interior is very adorable and decorated with different beautiful colors. The whole scene of this amazing place is very eye pleasing and has many notable attractions. Among different mesmerizing sites, the 67-meter high peak is highly visited and popular. It is also the heaviest and highest peak in the world. 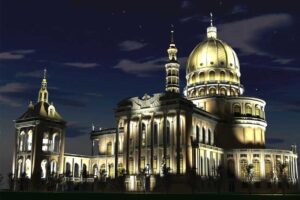 With a height of 141.2 meters, Basilica of our lady of Lichen is among the most famous and largest churches in the world. It has a huge ground area of 10090 square meters. This breathtaking church is located in the well known Konin city of Poland. The construction is properly started in 1994 and it literally took ten years to the completion.

33 steps that lead towards it actually represents the early life of Jesus Christ. There are 365 windows, 12 columns and 52 magnificent doors that beautifully symbolize the 12 Apostles and number of days and weeks in a year respectively. 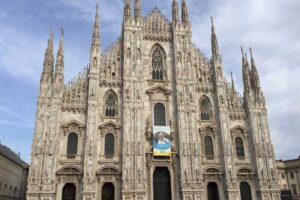 In Milan city of Italy, this second largest Catholic cathedral is presently named as  Milan Cathedral. It is the most well-known and finest examples of Gothic architecture. With the 135 spires, this majestic place has many notable attractions. It is also crowned with inspiring statues that basically represent significant people in the history of Italy. 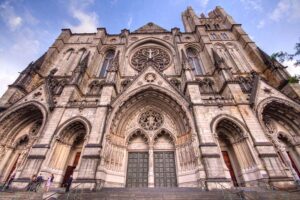 This remarkable cathedral of Saint John the Divine located in New York City is the biggest Anglican cathedral in the world. This huge cathedral contains an internal area of 112000 square meters and approximately a length of 183.2 meters. The construction of this masterpiece begins in 1892. It was originally designed by two extremely popular American architects, George Heins, and Christopher Grant Lafarge.

Amazingly, The construction of the choir and domed vault of this beautiful Cathedral Of Saint John proceeded for more than 20 years. After George Heins, death new architects chose the epic Gothic design for the cathedral. World War II causes many problems during its construction. Due to World War II, the construction halted for many years. Some part of it is also badly destroyed by fire in 2001 and as a result, the restoration remained unfinished.

The actual height of the dome crossing of Saint John The divine is 162 feet. In the entrance, some of the famous verses from the Bible were also engraved in stone.

The main door of Saint John The divine is very precious and is made up of bronze and beautifully decorated with 48 relief panels. It also contains the large rose window made of 10000 pieces of colored stained glass. The amazing thing about this stained glass is that it is the fifth largest stained-glass window in the world and largest in the United States. 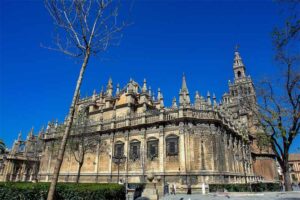 Seville cathedral in Seville city of Spain is the well-known biggest cathedral in the world. This piece of art has an internal area of 11520 square meters. It marks its name at number 3 in the list of third Largest Churches in the world. This place has also very important because it is the final resting place of great Genoese explorer Christopher Columbus.

The main motive behind its construction is to commemorate the power and wealth of the city. The enormous Seville Cathedral was constructed between 1402 and 1528 on the eye-pleasing site of Almohad mosque, to mark the actual power of the city after Reconquista of Iberia from Moors. The tremendous cathedral was elegantly designed by the famous French architect Rouen Cathedral.

The central nave of this enormous and elegant church stands 42 meters in height. The expansive interior has an inspiring and impressive decoration with gold. One of the major and highly noticeable attractions of the cathedral is 45 wooden carved scenes from the life of Jesus Christ. It is the most popular and biggest altarpiece in the world. The Seville cathedral also contains amazingly large chapels and choirs. One of the highly visited The La Giralda, the minaret of the Almohad mosque still stands beside the cathedral.

2. Basilica Of The National Shrine Of Our Lady Of Aparecida, Aparecida, Brazil, 12000 square meters

It is the second largest church in the world having a huge floor area of 12000 square meters. It is the most significant Marian pilgrimage center in Brazil, located in the gorgeous city of Aparecida. This one of the biggest church is capable of accommodating 45000 worshipers.

As per the mythology, a group of fishers got a gorgeous headless statue of Virgin Mary from Paraiba river while fishing in 1717. The interesting thing is that they also brought the sculpture of the Virgin Mary to their home. In 1945, they actually housed the sculpture in the shrine. There is also a believed revolving around that statue was sculptured by a Brazilian monk named Frei Agostino de Jesus.

There is a new church which is present on the spot of the old shrine was built between 1834 and 1888. The existing version of this beautiful church built in the 20th century. The height of towers of the church102 meters and its dome is 70 meters high.

St.Peter’s Basilica is present in the Vatican City at the top at this list. It amazingly stretches over 186 meters in length and has a huge internal area of 15160 square meters. The spectacular and impressive central dome of the cathedral rises to 136 meters high. St.Peter’s basilica has very importance in Roman Catholicism. The vast cathedral ensures accommodation of 20000 prayers at a time.

The original one was built in 320 AD by very famous Emperor Constantine. It was brilliantly redesigned and enlarged in the 15th century by Pope Nicolas V. Its 41 meters high dome of was elegantly designed great Italian artist Michelangelo.

The peak level of colonnade contains an astonishing 140 statues of various saints. The sculpting of these breathtaking statues started in 1662 and processed for the next 41 years. St.Peter’s Basilica has great importance among the whole Christian community. People who are miles away came to this place to see this masterpiece. It is a tremendous and pure piece of art that exists in Vatican City.