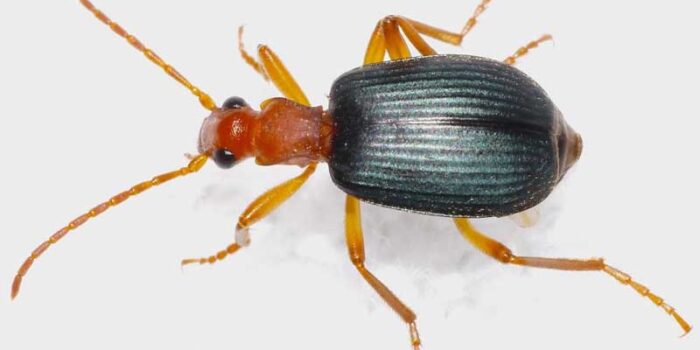 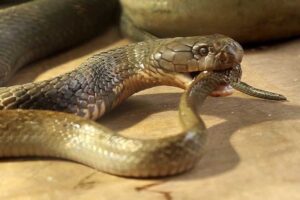 King rat snake is a large and stunning constrictor that is mostly found in open forests and meadows of China, Northern Vietnam, and China. This snake is well known by the name of ‘stinking goddess’ because of its habit of producing a strong pungent smell. They basically use this defensive mechanism in order to save themselves from king rat snakes.

When they found any threat they quickly release the offensive odor from post-anal glands. Surprisingly, this stinky king rat snakes found as an exotic pet in some parts of the world. This large species can grow up to a maximum length of 2.4 meters. The main food of rat snakes is rodents. 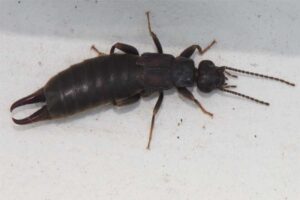 The earwig is a small, dark insect that is native to America, Asia, Australia, and Africa. The earwigs are nocturnal and they basically hide under the rocks or in the small opening during the day. The earwig is a stinky insect. When they found any threat they quickly squirt stinky, yellow colored liquid from its scent glands. This defensive mechanism actually protects them from their potential predators like frogs, beetles, and toads. Earwig comes at number 9 in the list of smelliest animals. 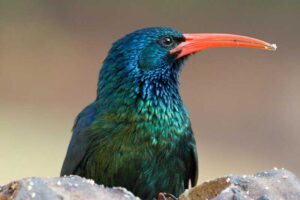 Wood hoopoe is a well-known medium-sized, long-billed bird native to sub-Saharan Africa. Their attractive and graceful plumage comes in green, blue or purple. This unique creature is extremely famous for spraying smelly fluid. It smells as worst as rotten eggs and no one can even stand close to him. The main motive behind this stinky behavior is to protect their nest from predators.

Through specialized glands, Wood hoopoe produce a smelly fluid. It is very effective and great defensive weapon for such a medium-sized bird. 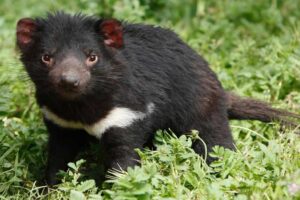 Tasmanian devil is a strange mammal and also among unique creatures that only found in Tasmania State of Australia. The small dog-sized mammal looks fierce, but they are not dangerous. Tasmanian devils are highly famous for their black fur, keen sense of smell and extremely loud screams. They are also among smelliest animals who release a pungent odor when threatened. They use this defensive mechanism in order to save their selves from potential predators. 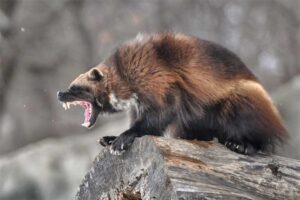 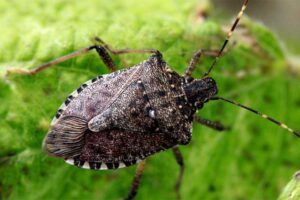 The stink bugs are named after their behavior of releasing very unpleasant smell when they found any threat. This amazing defensive mechanism basically helps them to not being food for potential predators like lizards. It is the gland in the abdomen, which helps these unique creatures to produce an unpleasant smell.

Basically, they are agricultural pests which can cause huge damage to vegetables and fruits. They are among those interesting animals that are very common in the U.S, China, and Japan. These unique creatures can be found inside your house in the summer season. 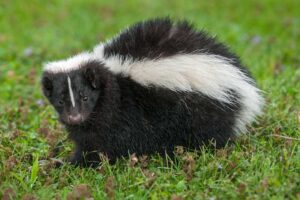 Skunk is a small mammal and comes at number 4 in the list of smelliest animals. This unique creature is well known for spraying horrible smelling oily liquids when threatened. The skunks are capable of ejecting the foul-smelling oily liquid to a distance up to 3 meters. This oily liquid is very unpleasant and is actually produced by two nut sized glands under their tail. By doing this they can defend their selves from even a larger predator like bears.

The skunks basically not use their ‘spraying foul-smelling liquid’ mechanism for the first time when they found a threat. They will growl, fluff the fur and shake their tails in a stunning way on facing a predator. If the danger persists and won’t go away then the skunks will spray the stinky, oily liquid on the predators. The skunk liquid is not at all harmful. But it is completely uncomfortable and lingers for many days. 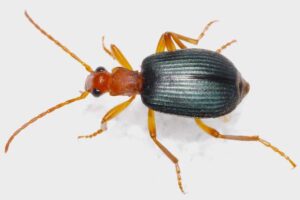 The bombardier beetles are named after their unusual defensive mechanism. When threatened, they release a foul-smelling which is unbearable, hot and a noxious chemical. They release this unpleasant chemical from the tip of their abdomen. The Bombardier Beetle is capable of spraying the chemical in a number of times on the predators with great accuracy and speed and that is the reason they are among smelliest animals,

The special chambers which are located inside the abdomen of bombardier beetles contain two unbearable chemicals called hydroquinone and hydrogen peroxide. When they found any threat they quickly mix the potent chemicals with enzymes and spray it on the intruder. These enzymes actually heat up the chemical mix to near 100 degree Celsius.

They also use this noxious chemical for catching their prey. Through this chemical, they can easily kill small insects. If this chemical got contact with human skin it will produce a burning sensation. These unique creatures are well known for producing an unpleasant smell. 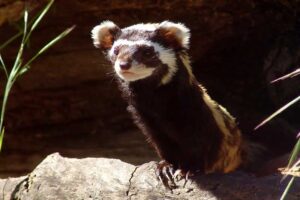 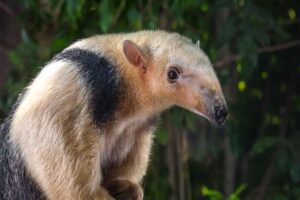 Lesser anteater is leading the list of smelliest animals. Surprisingly it is 5-7 times stinker than sunk. Like other stinky and unique creatures, the lesser anteater releases the unpleasant smell to defend against the predators. They produce the unpleasant odor from the glands under their tail.

The lesser anteaters are basically nocturnal; spend daytime in resting in hollow tree trunks. Their eye vision is quite poor but has a strong sense of smell and hearing. Despite having a behavior of releasing unpleasant odor the lesser anteaters also have powerful arms to defend against the predators.