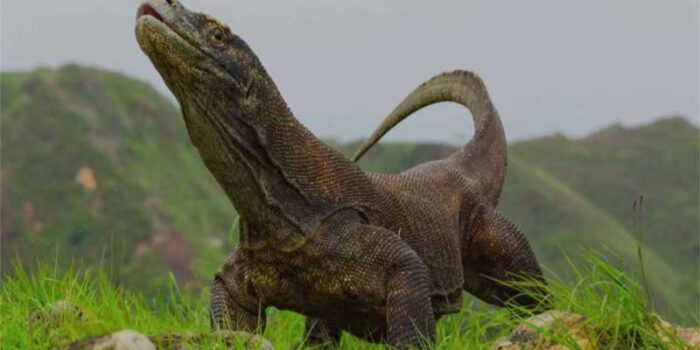 Over thousand of lizard species are living in this world. They are the biggest and one of the most diverse groups of reptiles living on Earth. Lizards are present everywhere except Antarctica. Most people don’t like this creepy creature especially when it enters the house. Its presence some time irritate people they often kill them. Here are the 10 Largest Lizards living in the world. 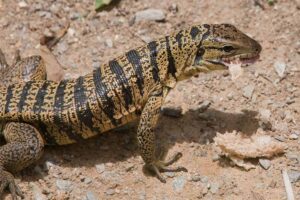 The gold tegu is one of the largest lizards living in the world. They are mostly found in tropical forests found in the northern and central part of South America. This creepy creature can grow up to 3ft long in size and 4.0kg in weight! This lizard species has powerful and strong limbs, a glossy looking body, and a thick long tail. The gold tegu prefers to eat insects, birds, small mammals, reptiles, fish and sometimes fruit. 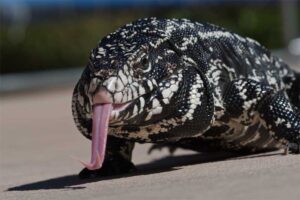 The Argentine black and white tegu, also famous as ‘the giant tegu’ is one of the largest lizard species found on Earth. These species are omnivores and have very high intelligence. When the temperature drops, it will go into brumation, which is a form of hibernation. The tegu’s tail is so powerful and strong, it can be used as a weapon to protect the lizard if it feels uncomfortable and is powerful enough to leave a bruise. 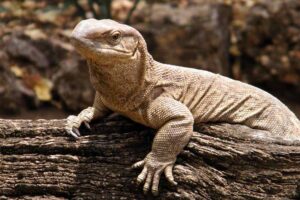 The Rock monitor comes at number eight in the list of Largest Lizards living in the world. It’s another famous name is ‘the black-throated monitor’. This lizard is native to southern Africa and is extremely popular there because it is the second-longest lizard and heaviest-bodied ever found on the continent. The weight of the adult male is around 6-8kg and females weigh around 5kg. Their intelligence level is very high and is 6ft 7inches in length. 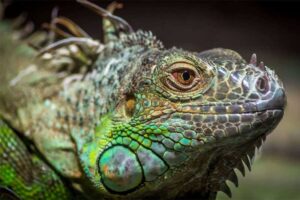 The green iguana is also popular as the American iguana and is the seventh largest species of lizard. This biggest lizard is 2 meters in length and 9.1kg in weight. People also kept Green Iguana as a pet because it is very calm in nature. They are attractive as well because of their bright colors but can be very demanding to care for properly. They are herbivores that feed on leaves such as turnip greens, mustard greens, dandelion greens, flowers, and fruit. 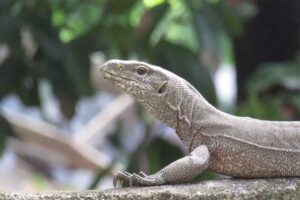 This creepy creature is commonly known as ‘common Indian monitor’, is the biggest lizard present in a huge amount over the Indian Subcontinent as well as parts of West Asia and Southeast Asia. It is the 6th largest lizard species found on Earth. The length of this lizard is 175cm and a weight of 7.2kg! Males are mostly larger and heavier than females. The Bengal monitor feeds of beetles, snails, scorpions, grubs, and other invertebrates. They also eat fish, smaller lizards, snakes, and frogs. Bengal Monitor sometimes prefer to eat even dead animals! 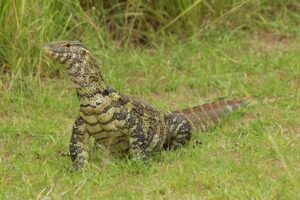 The Nile monitor is a very popular big member of the monitor family. It is heavily found throughout Africa. Another famous name is the ‘African small-grain lizard’. Their length is about 3 ft 11 inches and 20k in weight. This species of lizard contain large pointy teeth with razor-sharp claws that they use for digging, climbing. There teeth and claws are so sharp that they use them as the main weapon against the enemy. 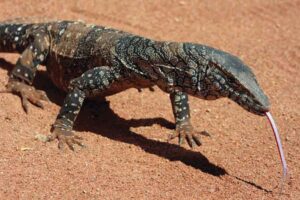 The Perentie is the biggest monitor lizard and is native to Australia. It makes Perentie marks it a name at number 4 in this list. Its height is about 8ft 2inches and a whopping 15kg in weight! This creepy creature is carnivores and feeds on a wide variety of pray. It depends on actually how big they are, they also hunt other fish, birds, lizards, and insects. Those perenties who are bigger will hunt bigger animals such as kangaroos! Their tails are so strong and powerful that they could even break a dogs leg. 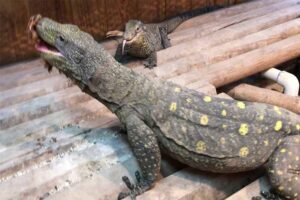 Varanus Salvadorii is endemic to New Guinea. Papua(n) monitor, artellia, crocodile monitor, Salvadori’s monitor are its some common names. It is among the largest lizards who are very popular in the world. It can easily grow up to 244 cm (8 ft) and its tail is exceptionally long. Its dark green body is very attractive because of the yellowish spots, which are present on a whole body. This unique creature feeds on birds, carrion, small mammals and eggs. 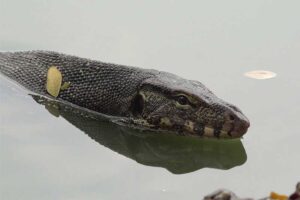 The Asian water monitor also is known as water monitor, present in South and Southeast Asia. It is very popular in Asia, ranging from Sri Lanka, the Malay Peninsula, coastal northeast India to Indochina and Indonesian islands where it prefers to live close to water. It is one of the large species with a weight of 1kg and a height of 16 inches. Their length never stops and exciting thing about them is that they grow much larger throughout life. So the process of increase in length never stops. It is on record that their largest specimen, which is from Sri Lanka, measured 3.21 m. 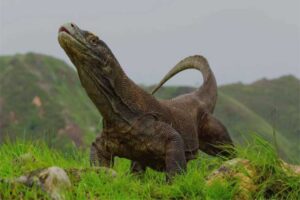 The Komodo dragon is mostly found in the Indonesian islands of Rinca, Gili Motang, Komodo and Flores. It is the largest living species of lizard. It is top at the list because it can grow to a maximum length of 3 meters.