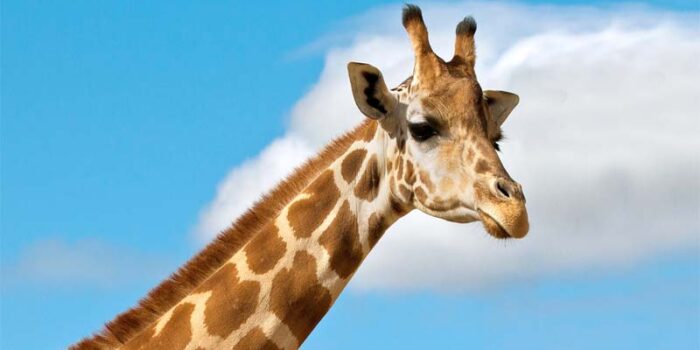 Giraffes are very famous because of their extraordinary height. Giraffe is the tallest mammal in the world. It contains distinctive coat patterns and extremely appealing appearance. The whole appearance of Giraffe is totally different from all other animals. Its extremely long neck and legs and horn-like ossicones attract millions of people. That’s why Giraffes are very famous among animal lovers. Their food source is flowers of woody plants, leaves, and fruits, primarily acacia species, which they can easily reach because of their large neck, most other herbivores cannot reach.

Giraffes are one of the most popular animals, they also featured in paintings, cartoons, and books. Kids love them because of their attractive and beautiful shape. They are also available in different national parks and zoos. The park’s owners earn a lot of profit because of this adorable animal. A huge amount of people pay their visit to see this amazing creature. In 24 hours, They only sleep for 5 to 20 minutes. The funny and weird fact about their mating is that before mating, the female urinates in the mouth of the male.

As compared with other animals their blood pressure is very high, this is because their heart has to pump extremely hard against gravity in order to reach its head.

Following are the 20 Extremely Funny & Weird facts about Giraffes. 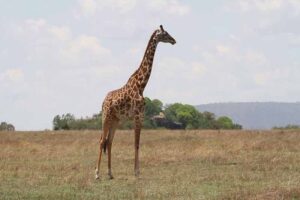 When we talk about Giraffes the first thing came to our mind is their height. They are the tallest mammal living on this planet, standing at around 4-5m high. Due to that much height, it is not surprising that their weight is quite a lot-up to 1900kg. Giraffe actually weighs more than most cars.

One of the most favorite and incredible giraffe facts is that they’re likely the biggest pollinators living in this world. All of this happens because of their huge height.

2. How many bones they have in their necks?? 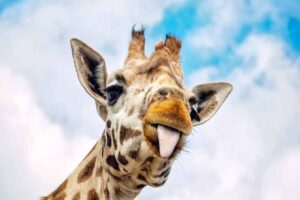 It is very surprising to know that they only have seven vertebrae in their necks-Despite having that much of height. They have the same number of bones in their neck that humans have. 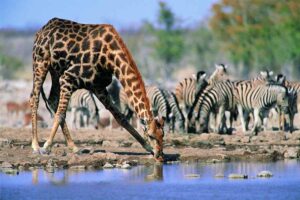 Due to their large neck, they actually can’t reach the ground. So what actually it does is just shuffle and spread its front legs in just an awkward and graceless way to reach the ground for drinking water.

4. How many giraffe species exist? 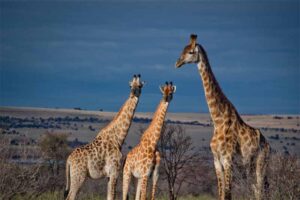 A study suggests that the giraffe is not an only species living in this world. But actually, there are four distinct species- the reticulated giraffe, the northern giraffe, Masai giraffe, and the southern giraffe.

5. Where this amazing mammal lives?? 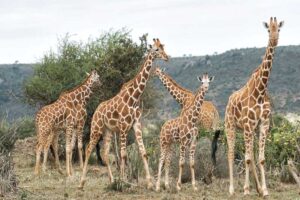 They are widely distributed throughout North and West Africa, including the Sahara, and along the Nile. But in today’s date, they are only found in sub-Sarahan Africa.

6. Are any other animals related to Giraffes? 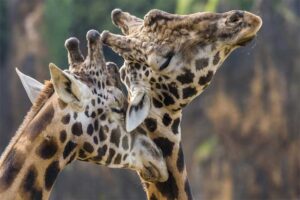 This unique creature is a part of the Giraffidae family, which have only one other species, named as the rare okapi. The rare okapi is its nearest relative. Its neck is shorter and contains black-and-white hind stripes. These black-and-white hind stripes quite same as Zebras have, so a lot of people think they are zebras but in reality, they are not. This resemblance is purely coincidental. 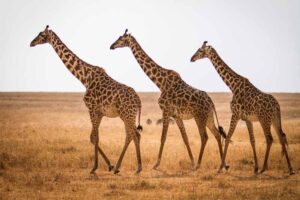 Four-legged mammals like giraffes and horses actually swing their legs on the same side with almost the same timing when they are walking, known as ‘pacing’. Interestingly camels also walk in the same way.

It is a quite funny thing that the size of their feet is as same as a dinner plate. The hooves are huge with a diameter of 30 cm. These huge hooves prove to be quite beneficial for them because they stop them from sinking into loose sand despite having huge weight.

9. Can this unique creature swim?? 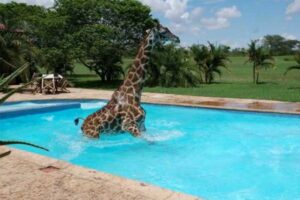 They can’t swim due to their spindly legs because their legs did not actually provide them sufficient purchase in water to support its neck. Therefore they are the only mammal in the world who actually can’t swim. 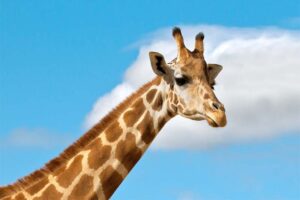 Both male and females contain horns at birth. Its proper name is ‘ossicones’, they amazingly lie flat and are not attached to the skull, so at the time of birth, the chances of injury are very low.

10 largest lizards living in the world