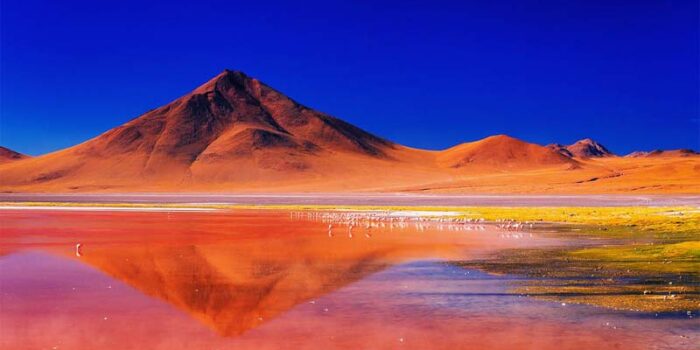 Our earth is bizarre that has plenty of natural sites that mystifying us occasionally. Because our planet has some appealing unfriendly lakes or sites that can be dangerous for humanity. No doubt for tourists, visiting any lake brings relaxation or happiness, but some lakes are unusual in the world. We should avoid going there, but there is not the same case with all some can be strange but eco friendly for human. Here in this piece of writing, you will get information about the 10 strangest lakes in the world.

Roopkund Lake is notorious for Mystery or Skeletons Lake in the world. It is a high glacier lake in the Uttarakhand, India. This lake is strange from normal lakes that have hundreds of ancient human skeletons in it. It stretches up to the altitude of 16,470 feet. When the snow melts you can see human skeletons at the bottom of the lake that looks terrifying. According to some research, a large number of group people killed as a result of sudden violent hailstorm in the 9th century. Over time, this valley overflowed by water and ultimately changes into the skeleton haunted and strangest lakes on the planet.

Jellyfish Lake is an oceanic lake that placed on the Island of Palau. There are several stunning lakes you can find in Eil Malk Island that part of rocky islands. Approximately there are 70 oceanic type lakes you can find through the island of Rock. Millions of golden jellyfish migrate from the ocean in the lake regularly. Jellyfish Lake connects with the ocean through fissures and tunnels that’s why fish come in this lake. This lake is including the strangest lakes in the world due to beautiful golden jellyfish.

Medicine Lake is a huge shield volcano in California around 30 miles northeast of Mount Shasta. This mysterious and strange lake exists in Alberta’s Jasper National Park. You may never find this lake in winter because its water entirely disappears. If you are thinking about evaporation, No-no, In fact, its water consumes at the bottom of the lake as it has any gigantic bathtub. Medicine Lake is a 4 mile long, 100 feet cavernous flood caused when melting glaciers from nearby mountains that get together with the Maligne River.

Their summer fling happens to be placed in a straight line on top of a sequence of sinkholes that soak up the river, transfer it through a 10 miles way of underwater caves (that knows as one of the largest unreachable sites on earth), after which it shows above land again in Maligne Canyon. The 4,000 gallons of water soak out every second. This place’s residents used to call it “Magic Lake.” It comprises one of the strangest lakes on the planet. This vanishing act of water remained a puzzle until the 1970s when biodegradable dye exposed the truth of natural sortilege.

The lost lake exists in the Mount Hood National Forest. In the summer season, the 9 ft deep lake disappears and in falls it reappears again. What is the reason behind its disappearance? The reason is that lave tubes at the base of the lake, constantly draining the lake dry. The lakebed starts to fill in fall, as the rain comes to start that exceed the ability of the lava tubes to drain off the water. That’s the main reason Lake becomes lost in the summer than winters. It acknowledges the 10 strangest lakes in the world.

Yellowstone Lake is one of the strangest lakes located in Yellowstone National Park. It stretches up to the 7,732 feet over sea level that covers up the 136 sq mile area. It is the huge lake that placed above the 7000 ft in North America. By its name, everyone must think about it. During winter ice covers the surfaces of the lake almost 3 ft but its shallow-water part remains uncovered. This is the recent topmost of the lake that’s why it termed Yellow Supervolcano, that one day will erupt and what happen then think about it. It is famous all over the world as in strangest lakes.

The second-largest boiling lake in the world exists in the Caribbean island of Dominica. This lake, placed around 6.5 miles far the capital of Roseau. It is overflowing with grayish-blue water bubbles that usually enclose in a cloud vapor. Its water reaches up to the temperature of 212 degrees Fahrenheit. We should say thanks to carbon dioxide and sulfuric gases that, released from the bottom of a large crater. Hence, it is one of the strangest lakes in the world.

Man Sagar Lake is an artificial lake that exists in Jaipur, India. In the center of an enchanting palace is standing the “Jal Mahal” that means “water palace”. It is an architectural gem of the Indian state that’s now protected by the government, but the Jal Mahal is not open to the public. Due to Mahal, it is popular for the strangest lakes in the world.

The spotted lake, situated in British Columbia, Canada that can be accessible by Highway 3. This lake is famous for its amazing large puddles in blue and green shades. By extraordinary looking lakes it is including in the strangest lakes of the world. Its spots are minerals that look bright in the sunshine that’s why it produces colors. But first nation people became scared of its unusual phenomena.

One of the world’s strangest lakes originated at the peak of Ethiopia’s Erta Ale volcano. It is a molten lava lake that overflows daily. it is the most lively volcano in Ethiopia, which is 613 m high. Etra Ale is a smoky mountain that is also famous for “gateway to hell”

It is situated on the Bolivian Altiplano, along the border of Chilean. The Laguna Colorada is a bloody red colored salt lake that looks strange. Its odd color is due to the sediments and the pigments of certain microorganisms found in the lake. It is one of the strangest lakes in the world