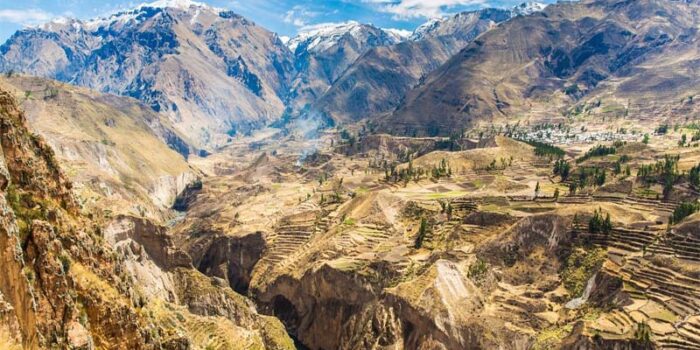 South America is a continent, but it may also be considered a subcontinent of America. It is the majority of European, Spanish, and Portuguese-speaking regions of the Americas. The orientation to South America as a substitute for other regions like Latin American or the Southern Cone has increased in the last decades as a result of altering geopolitical dynamics. There are an ample amount of natural landmarks that festinates tourists from all over the world. Below the list is having the top 10 natural landmarks in South America.

The Perito Moreno Glacier is one of the natural landmarks in South America. It is located in the Los Glaciares National Park, southwest of Argentina. This Perito is famous among tourists and, have covered a large mass of around 250 km sq and still expanding. Around the world, this ice field is 3rd largest reservation of freshwater. The glacier boasts that, separated from ice slabs and icebergs, generating a breathtaking view.

The majestic waterfalls of Iguazu that connect the borders of Argentina and Brazil are making the largest waterfalls in the Earth. These falls are dividing the river into the upper and lower sides of Iguazu. River Iguazu is raising close to the city of Curitiba, its most track flows through Brazil that’s why mostly waterfall is on Argentina’s side. These falls are not very large that comprises 275 cascades, which are creating a colossal volume of downfall at the height of 87 m. Many alleys surrounding the falls present several vantage spots for perfect photography. This is one of the attractive natural landmarks in South America that are best for visit.

The biggest river on the planet after the Nile River commences its journey from Peru and after that flows to Columbia and Brazil. Amazon river’ basin is also the largest drainage basins in the world. It has a total area of mass around 7,050,000 sq km. the mysterious river after miles a dense forest, concealed tribes and wildlife. Those who have an interest in nature they shouldn’t miss this spot that is eco friendly for tourists. It counts in beautiful and magnificent natural landmarks in South America.

Angel falls that find in Venezuela is famous for the “waterfall of the deepest place”. It is a huge fall that’s why it got this name “angel falls” that having an enormous height of 979m. It is one of the UNESCO sites that protect it. This fall drops into the deep forest that’s why it is difficult to access. It reckons in the natural wonders and landmarks in South America.

Rio de Janeiro is the 2nd most crowded municipality in Brazil. It is the main tourist attraction, millions of visitors come here to see the statue of “Christ the Redeemer” at the top of Corcovado mountain. Including it is famous for the Carnaval festival. It is one of the natural landmarks of South America.

In the southwest of the altiplano of Bolivia, there is a shallow salt lake “Laguna Colorada” which consists of natural landmarks in South America. Fascinating thing is that this shallow lake has unique geology that its water has become red and orange after algae. This lake is famous because of a large amount of flamingos that find here looks stunning. This lake has expanded from 513.18 to 14,277.17 km2. Its surroundings have high Andean endorheic, hypersaline and brackish lakes. You can find here Andean and Chilean flamingos but in rare numbers.

These are sequences of limestone caves that, situated close to the village of Florencecourt in Northern Ireland. These caves began to call Marble caves due to closeness of marble arch and generally made by marble. These exist near the Chile part of the General Carrera Lake and the natural landmarks of South America. You can go by small boats to see through the marble caves there as you will see clear, eye-catching turquoise water.

French Valley acknowledges the greater inland Empire area of Southern California. In 1800, it was the hub of French grain peasants and shepherds but after the Franco-Prussian War, its residents’ fled to America. It got this name “French Valley” by the California Conservation Commission report in 1913. Now it has become natural landmarks in South America after 1989 when it reformed into wildlife areas by the California Department of Fish and Wildlife.

Puente del Inca is the natural wonders and landmarks in South America. It’s a natural arch bridge that placed at the top of the Las Cuevas River. This natural bridge is having 48m length and 8m width. Glaciers and hot springs both, involved in making the arch above the river. The water that is flowing in the hot spring is abundant with natural minerals.

The Colca Canyon is located in Southern Peru near the Colca River that why it is called by its name. It stretches up to around 160 km northwest of Arequipa. In Peru, it is 3rd most famous, deepest, and crowded destination. Approximately 120,000 tourists come here annually. The Colca Valley is a multi-colored Andean valley with pre-Inca roots in towns that originated in Spanish colonial times. It is still populated by people of the Collegua and the Cabana cultures one of the natural landmarks in South America.