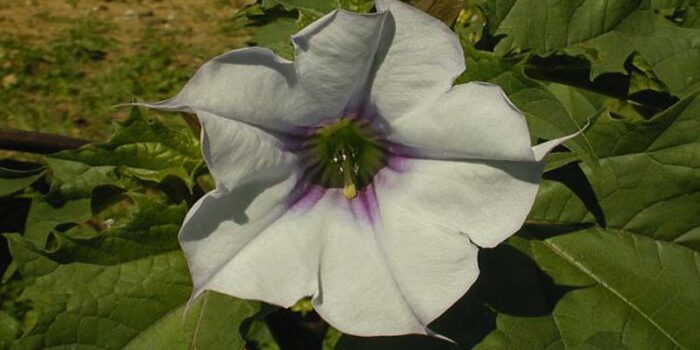 Do you know plants can kill humans also? Yes, when human beings come in contact with venomous plants. It is because many plants generate different sorts of chemicals after getting in touch with animals or humans. Due to this way plants indirectly get protection from animals and human beings. A lot of people died from just touching some specific plants. Today we shall discuss the 10 poisonous plants in the world.

Cerbera odollam got the name of the Suicide tree because of its toxicity. Through its name, it is a little surprising how a tree can kill anyone but its true many individuals have lost life due to this plant. This plant species found in India and also some parts of Southern Asia. The suicide tree is responsible for almost 50 deaths in the Indian state of Kerala around a year. Its seed in the fruit is a high toxin that contains a powerful alkaloid, Cerberin. One of the causes of it’s widely used in spicy foods that its taste can cover easily. It is widely used for committing suicide or murder because cardiac glycoside blocks calcium ion channels in the heart muscle. Therefore, that causes fatal heart distraction. It consists of 10 poisonous plants in the world

Ageratina altissima is a poisonous herb that produces in eastern and central North America. It is known as White snakeroot, it became popular because Abraham Lincoln’s mother died in 1818 because of this poisonous herb. Tremetol is one of the toxins found in this plant that cause the reason of death that’s why it counts in poisonous plants. Sometimes these plants consumed by cattle such as cows and sheep, after that it mixes in their milk or meat. Finally, it delivers into human beings. Approximately more than 10,000 people died because of “milk sickness” in the 19th century. Because of milk sickness it was noted in the past patients they felt vomiting, weakness, pain and the excessive result of poison create the condition of Comma and death.

Cicuta Maculata comprises the most poisonous plants in the world. This toxic plant generally known as Eater Hemlock produces in North America. It contains a dangerous toxin called cicutoxin. This toxin is a big reason for the breakdown of the nervous system, rapid attack, and tremors. Other symptoms also recorded as nausea, abdominal pain, and emesis. These indications in a person occur within one hour after consuming the plant. Its high dosage can lead to the rapid death of an individual. In past Greece used this plant for death punishment to the culprit.

Perhaps the most poisonous plants find on the planet because it’s each part contains poison. Nerium Oleander is a shrub related to the family of Apocynaceae. The two powerful venoms contain side by side in this plant. In it can become a person poisonous who just simply eats honey made by bees, who took oleander nectar. Despite its fatal nature, this plant widely uses for decorative purposes. It generates enchanting fragrance however, animals stay away from it. Oleander is equally the poisonous plant in the world that is dangerous for humans and animals both.

It is one of the poisonous plants that call by scariest name, the deadly nightshade. It grows 1.5 meters high above the earth. This can be renowned by the dull, dark green leaves, and specific bell-shaped purple flowers. This plant contains a deadly poison that hits the nervous system and finally paralyzes the muscular system. It is a wild plant and native to Europe, North Africa, and western Asia. It counts in rare plants that are poisonous for human beings but safe for animals and birds.

The castor oil plant first originated in Africa but now available worldwide. It produces a yellowish-green flower along the reddish mid part. Historically castor beans used in ointments. Cleopatra also used this oil for making brighten her eyelashes. You know about its use in cuisines also. Do you know its seed is dangerous to have a poisonous element? Yes, it generates the most powerful poison; many people suffer from the allergic result by its seeds’ dust. General symptoms recorded as nausea, cramps in the abdomen, vomiting, internal bleeding, and difficulty in breathing. Ultimately that leads to kidney failure or even death. Hence, it counts in most poisonous plants.

Aconite is a flowering plant that generates in the hilly areas of the Northern Hemisphere. This plant is wicked for “wolf’s bane” or “leopard bane” and also called monkshood that contains a poison alkaloid. Aconite’s roots and tubers are extremely poisonous by nature. Greeks used this poison to kill leopards and wolves that’s why it got the name after it wolf or leopard bane. It is a tall plant having 6 feet, so venomous that’s touch is also harmful. Aconite’s flowers look so adorable and attractive with mixed colors of white, blue, and purple. The unintentional consumption of these most poisonous plants leads to burn, vomiting, and diarrhea. The harsh conditions noted as variations in blood pressure, irregular heartbeat, and even comma.

Rose pea grows in tropical climatic regions all over the world. It’s eye-catching seeds use as beads in Indian and Indonesian areas. Due to the presence of natural poison known as “Abrin,” these plants become poisonous. Abrin is present in the inside of seeds. Breaking shells can expose the abrin, which reckons this plant the most poisonous plant in the world. If mistakenly consume abrin can bring severe changes in the human body. This toxin stop cells to produce valuable essential proteins. The symptoms noted in this condition such as difficulty in breathing, vomiting, diarrhea, dehydration, and pain in the eyes. The high potency of abrin exposure leads to death within 72 hours.

Rhododendron is an attractive spring flourishing plant that is native to Asian countries. in late spring it blossoms multiple colors of flowers that vary as pink, violet, red, yellow, and white. But most parts of the rhododendron plant hold deadly poison. Andromedotoxin, grayanotoxin, and rhodotoxin are major poisonous elements that found within rhododendron plants. But high potency of toxin elements mostly available within leaves of rhododendron. Nausea, slow heartbeat, falling, and fatigue are the several indications found within animals after overwhelming parts of rhododendron. The accidental use of these plants also makes weakness, difficulty in breathing, loss of equilibrium, and salivation in humans. That’s why it counts in most poisonous plants all over the world.

Jimsonweed also notorious for devil’s weed, hell’s a bell, and devil’s trumpet, that grows across the United States, Canada, and some islands of the Caribbean. The plant has the power to change mind states, act as a powerful hallucinogen.

But elements of poison can be seen inside most of all parts of Jimsonweed, mostly stored in leaves and seeds. Its plant grows up to a height of 3 to 5 feet and mostly its roots grow long. The leaves of these plants also have a length between 5 to 8 inches. Cream or violet colored fragrant flowers also blooms throughout the summer season. The toxicity in jimsonweed varies by plant’s age, climate, and place it belongs to. The careless usage, especially by sucking the juice of eating roots, leaves of Jimsonweed will affect your nervous system, eyes, ears, throat, and mouth, overdose also results in death.