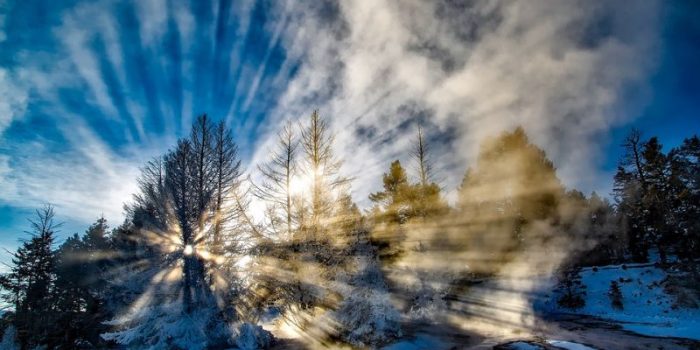 Yellowstone National Park is a truly unique and fascinating place, having been designated as the country’s first national park in 1872. Do you know about fun facts about Yellowstone national park? The park is known for its diverse range of wildlife that can be found roaming the park, including grizzly bears, wolves, bison, and moose.

Another “interesting fact about Yellowstone National Park” is that it sits on an active supervolcano, which is responsible for the park’s famous geysers and hot springs.

The temperature and acidity levels of some of the hot springs in the park can reach up to 199 degrees Fahrenheit and pH levels as low as 1.2, providing visitors with a truly unique and fascinating experience.

Additionally, the park has a rich history that includes the once popular “bear shows” which were held in the past, adding an extra layer of “interesting facts” to the park. These are just a few examples of the many “interesting facts about Yellowstone National Park” that make it a fascinating and unique destination.

Yellowstone National Park is home to the largest collection of geysers in the world, and the most famous one is Old Faithful. Despite its name, Old Faithful is not as reliable as it once was. The average interval between eruptions has lengthened in recent decades, making it less predictable.

However, it is still one of the most frequent geysers, erupting around 17 times a day. This famous geyser got its name in 1870 for its regularity, but today, it’s an interesting facts about Yellowstone national park that it’s not as faithful as it once was.

But despite its less predictable nature, Old Faithful still remains one of the most popular natural attractions in the park.

2. Yellowstone National Park: Home to Half of the World’s Hydrothermal Features

Another interesting facts about Yellowstone national park are it’s hydrothermal. Yellowstone National Park is a treasure trove of natural wonders, boasting an incredible collection of over 10,000 hydrothermal features. From steaming hot springs to bubbling mud pots, fumaroles, and travertine terraces, the park is a playground of geological marvels. But the real crown jewels of Yellowstone are its geysers, which are truly one-of-a-kind.

But what truly makes these hydrothermal features so special is the presence of thermophiles, tiny microorganisms that thrive in scorching temperatures. These heat-loving creatures are responsible for the park’s vibrant colors and mesmerizing patterns, making every feature a stunning work of art.

Whether you’re marveling at the brilliant blues of a hot spring or the swirling oranges and yellows of a mudpot, Yellowstone’s hydrothermal features are a feast for the eyes.

With so many awe-inspiring sights to see, Yellowstone National Park is a must-visit destination for nature lovers and adventure seekers alike. From the famous Old Faithful geyser to the lesser-known gems hidden throughout the park, there’s something for everyone to discover.

So pack your bags, grab your cameras, and get ready to explore one of the most fascinating and colorful places on Earth.

Yellowstone National Park is famous for its geysers and hot springs, but it is also home to one of the largest and most significant bison herds in the world. The bison in Yellowstone are unique in that they are the only population of bison in the United States that have lived continuously in the wild since prehistoric times.

Visitors to the park may encounter “bison jams” during rush hour as cars wait for the animals to cross the roads. Along with these interesting facts about Yellowstone national park, learn more about the fascinating history and biology of these majestic creatures and their important role in the ecosystem of Yellowstone National Park.

4. Unleashing the Power of Yellowstone: The Supervolcano beneath our feet

Beneath the picturesque landscape of Yellowstone lies a sleeping giant, one of the world’s largest active supervolcanoes. Eons ago, it unleashed a cataclysmic eruption, blanketing over 5,790 square miles with ash and rock. Did you know that this eruption was so massive that it created the Yellowstone caldera, the vast crater that the park now sits on?

Though it’s been eons since its last fiery outburst, the volcano still stirs, making it a constant source of fascination and fear. Fun facts about Yellowstone national park: The park is home to the world’s largest collection of geysers, including the famous Old Faithful geyser which erupts every 35 to 120 minutes.

To keep a watchful eye on this powerful force of nature, the National Park Service, in partnership with the U.S. Geological Survey and the University of Utah, established the Yellowstone Volcano Observatory in 2001, ensuring that any rumblings from the depths are closely monitored.

5. Exploring the Rich History of Yellowstone National Park: Dating Back Over 11,000 Years

One interesting facts about Yellowstone national park is that it is home to the world’s largest collection of geysers and hot springs, including the famous Old Faithful geyser.

The earliest known human settlements in the area have been discovered through archeological excavations at a site on the shore of Yellowstone Lake. These findings provide valuable insights into the lives and cultures of the people who lived in the region long before the arrival of Europeans.

After spending several years in the wilderness, Colter began to share stories of the incredible geothermal activity he had witnessed in the region.

However, many people found his tales to be hard to believe and mocked him for it, referring to the area as “Colter’s Hell.” Despite this, Colter’s descriptions of the geothermal features in the region would later prove to be accurate, and the area would eventually be recognized for its unique and valuable geological features.

6. A Haven for Mammal Diversity in the Contiguous United States

Yellowstone National Park boasts a rich and varied wildlife population, with over 300 different bird species, 16 fish species, and 67 mammal species, making it the area with the highest diversity of mammal species in the contiguous United States.

Another Interesting facts about Yellowstone national park are that it also contains half of all the world’s geysers, including the famous Old Faithful geyser. Visitors can expect to see a variety of mammals such as grizzly bears, wolves, lynxes, foxes, moose, and elk.

However, it is important to remember that while observing these animals may be exciting, it is crucial to adhere to park regulations and maintain a safe distance of at least 100 yards from bears and wolves, and 25 yards from other large animals.

7. Discovering the Grand Canyon of Yellowstone: A Natural Wonder in Yellowstone National Park

Yellowstone National Park is home to its own stunning canyon, known as the Grand Canyon of Yellowstone. This natural wonder was formed over time by erosion caused by the Yellowstone River, and its dimensions are truly impressive – it reaches depths of over 1,000 feet, widths ranging from 1,500 to 4,000 feet, and spans approximately 20 miles in length.

Additionally, there are multiple Interesting facts about Yellowstone national park just like the Grand Canyon of Yellowstone offers visitors breathtaking views and is a popular spot for photography, particularly from the vantage point of Artist Point, which offers a particularly stunning vantage point.

8. The Magma Beneath Yellowstone

Beneath the surface lies a potentially catastrophic threat: a magma chamber estimated to be just three miles below parts of the park. This massive pool of molten rock has the potential to fuel powerful volcanic eruptions and pose a significant danger to millions of visitors and nearby residents. Moreover, other interesting facts about Yellowstone national park are its hidden magma.

Scientists have been monitoring the activity at Yellowstone for decades and have detected an increase in seismic activity and ground deformation in recent years, indicating that the magma chamber may be recharging.

While there is no immediate danger, it is important for authorities and local communities to be prepared for the possibility of a future eruption. This could include creating evacuation plans and emergency preparedness measures, as well as continuing to closely monitor the activity beneath the park.

It’s important to note that volcanic eruptions at Yellowstone are rare events and the probability of a large eruption in the next few decades is low, however, it’s always better to be safe than sorry.

9. The Frequent But Harmless Earthquakes Of Yellowstone National Park

Yellowstone National Park is a seismically active area, with thousands of small earthquakes occurring each year. The park sits on top of a large volcanic caldera, and the earthquakes are caused by the movement of magma and fluids beneath the surface.

According to the United States Geological Survey (USGS), between 700 and 3,000 earthquakes occur in Yellowstone each year, with the majority measuring less than magnitude 2.5. The fun facts about Yellowstone national park are that these small earthquakes are not a cause for concern and do not indicate that a volcanic eruption is imminent. In fact, they can actually be helpful in providing scientists with valuable information about the activity beneath the park.

Also, other interesting facts about Yellowstone national park are that it’s important to note that while most of the earthquakes in Yellowstone are not felt, occasionally there are earthquakes that are large enough to be felt.

However, they are rare, and in recent history, there haven’t been any significant damage or injuries reported due to these earthquakes. The USGS continues to monitor the seismic activity in the park to ensure the safety of visitors and the surrounding communities.

Yellowstone National Park is known for its geysers, hot springs, and other geothermal features, but it also has a rich cultural history that spans thousands of years.

These sites include everything from hunting camps and fishing sites to burial grounds and sacred ceremonial areas. Many of them are located in remote areas of the park and can only be accessed with a permit. But for those who are able to visit, they offer a unique opportunity to learn about the history and culture of the people who once called this land home.

Many of the archeological sites in Yellowstone are still being studied and new discoveries are made regularly. Park archeologists and anthropologists work closely with tribal representatives and other experts to ensure that these sites are treated with respect and protected for future generations to learn from.