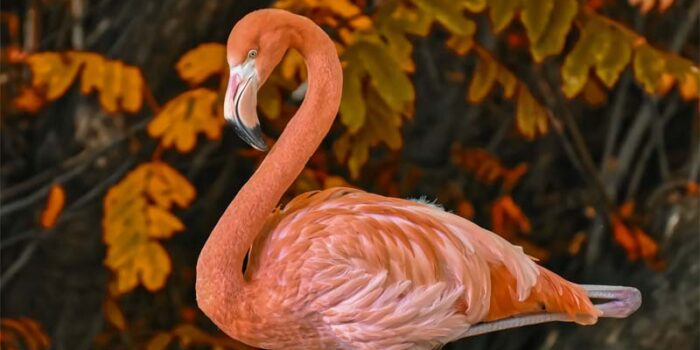 Flamingos are huge birds that are distinguished by long necks, sticklike legs, pinkish wings, and are highly sociable. Flamingos weren’t pinkish from the beginning. They got this pink and reddish feather’s color after eating a specific diet. There are around six species of flamingo that exist in this world. According to the Integrated Taxonomic Information System (ITIS) these are known as greater, lesser, Chilean, Andean, James, and American flamingos. Flamingo which, is greater flamingo is known as the tallest species in this family. Its height is almost 4.7 feet and weighs up to 7.7 lbs. estimated by Sea World.

The shortest species in this family is s the lesser flamingo, which is around 2.6 feet (80 cm) and weighs up to 5.5 lbs. The wingspan of flamingos is from 37 inches to 59 inches. There are many more interesting facts about flamingos that you may not know.

10. Diet has a strong effect on his appearance

The diet of flamingos is the larva, small insects, blue-green and red algae, shellfish, crayfish, and small fish. But they can eat both vegetation and meat because they are omnivores.

They got pink color also due to their diet pattern they eat the specific kind of algae which has beta carotene, an organic chemical which turns their white and greyish color to a reddish-orange pigment. Carotenoid levels are available differently in food in numerous parts of the world that’s why American flamingos are usually bright red and orange colors, while lesser flamingos that exist in Lake Nakuru of central Kenya are in paler pink.

As you know, the flamingo is a social bird that’s why it loves to live in groups which are known as colonies or flocks. They work together to defend each other from predators and take care of their young ones. In pairs, they establish the nesting territories for defense. For this purpose, mostly females locate an appropriate area to build a nest. Social ability is one of the interesting facts about flamingos.

Besides social creatures, they are also considered caring parents. When a flamingo chick hatches from the egg, both parents take turns to feed this little one. Parent flamingos give their chicks exclusive crop milk which is produced in their throat. They continue to give them for 5-12 days after hatching. After that specific time, chicks begin to search for food on their own but, they continue to take crop milk for up to two months before the development of their bills.

This high fat and protein substance is not like mammal milk, but it has an excellent amount of nutrients for growing chicks. Adult flamingos produce crop milk in their digestive tracts to feed their young ones. Their crop milk is exclusively interesting facts of flamingos.

As you know, flamingo chicks are born with their gray or white color but after spending three years they going to turn into a pinkish color. This color is one of the signs of gaining maturity, and interesting facts about flamingos. One of the facts is that young ones don’t have structure and fluffy feathers than adult plumage, but that down delivers brilliant filling to keep their babies warm.

They spend a very short period of their life as compared to the other birds in the forest. Flamingos just live 20-30 years in the wild world, but in captivity, they can live up to 50 years or longer. Captive flamingos live a longer life because they don’t have fear of predators, robbers, or other threats. They receive excellent veterinary care and abundant food in captivity.

It has believed that flamingos are monogamous creatures. Once they mate with any other flamingo, they tend to stay with their partner all their life. A group of flamingos mostly mate at the same time so that all of the chicks hatch at the same time. Pairs will build nests out of hills of mud, and the female will lay one egg at a time.

04. The national bird of the Bahamas

Flamingo is known as the national bird of the Bahamas. This social Caribbean flamingo represents the perfect choice. Interesting facts that these uniquely beautiful and colorful flamingos are not just carrying the symbol of national bird but also transmits the national symbol of Bahamas too. Plus, it is one of the birds which attain a long life in the Bahamas.

Experts don’t know why flamingos stand on one leg. Why they have adopted this unique habit. Maybe in this way, they lost less heat through the leg if it has tucked next to the bird’s body; though, this behavior is also observed in hot climates. Maybe they feel comfortable in this position. Their unique habit is also counting in interesting facts about flamingos.

02. The most common predators for flamingos

A huge variety of land hunters will also eat flamingos and their eggs, but since their nests are built on swamps or mudflats, they escaped from it. interesting facts about flamingos are that the most common predators for flamingos are other birds.

01.Flamingos used for the cure of tuberculosis

People do not just kill flamingos for meat or eggs. It has been observed that the Andean miners have killed flamingos for their fat through this they cure tuberculosis. Tuberculosis is a contagious illness that attacks the lungs.