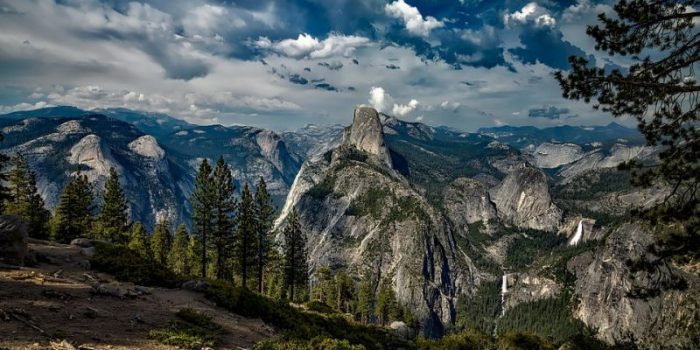 Yosemite National Park California was established in 1890 and is considered to be the precedent for all national parks in the United States. In order to protect the area from human-caused destruction, conservationists successfully urged President Abraham Lincoln to designate Yosemite Valley as a public trust of California.

This was the first instance of the U.S. government protecting land specifically for recreational use by visitors. Covering 759,620 acres, Yosemite National Park California boasts an elevation range from 2,000 to 13,114 feet. With almost 95% of the park classified as wilderness, it is home to a diverse array of plants and animals.

Discover the story of John Muir, the Scottish naturalist, and conservationist who played a pivotal role in the creation of Yosemite National Park California. Through his powerful writing, Muir brought attention to the unique beauty of the area and advocated for its preservation.

His tireless efforts led to the establishment of the park in 1890, earning him the title of the “father of national parks.” Explore the history of Yosemite National Park and the impact of Muir’s activism on preserving the natural beauty of the area.

Yosemite National Park in California is renowned for its natural beauty and awe-inspiring landmarks, one of which is the giant sequoia trees. These ancient trees are estimated to be around 3,000 years old and are truly a sight to behold.

They can grow to be a staggering 30 feet in diameter and soar over 250 feet tall, making them one of the tallest and widest tree species in the world. Towering titans of the forest, the giant sequoias boast not only impressive size but also unparalleled longevity. In fact, the Grizzly Giant in Mariposa Grove of Yosemite National Park holds the title of the oldest tree of its kind. A true marvel of nature’s endurance.

The Mariposa Grove is home to approximately 500 mature giant sequoias and is the most easily accessible grove for park visitors. Nevertheless, those who make the effort will be rewarded with the unforgettable sight of these magnificent trees.

3. First Non-Native American Expedition to Yosemite During Indian War of 1850-51

The Joseph R. Walker Expedition of 1833 may have had a glimpse of the valley from the northern wall, but they did not officially enter what is now known as Yosemite National Park.

The true honor of being the first non-native American to visit the valley goes to a group with a different motivation. In 1850, James D. Savage struck gold by founding a bustling trading post and mining camp on the hidden treasure trove of the Merced River, 20 miles deep into uncharted territory, where white settlers had yet to tread.

However, that spring, the tribe known as the Yosemites, who were the original inhabitants of the valley, attacked Savage’s post. Disaster struck on December 17th, 1850, when Savage’s trusty tribe turned on him, deserting the Mariposa camp. The next day, his Fresno post was brutally attacked, claiming the lives of two out of three brave souls.

This event sparked the Indian War of 1850-1851 and ultimately led to the first expedition of non-native Americans entering the valley. Discover the rich history of Yosemite National Park and learn about the first white men to enter the valley and the events that led to it.

Before the creation of the National Park Service in 1916, the natural beauty of Yosemite National Park California was at risk of being destroyed by tourists who had no regard for the park’s preservation. At a specific time, the U.S. Army played a crucial role in establishing a model for park management that is still in use today.

They established regulations and policies to protect the natural resources and wildlife in the park, as well as built infrastructure such as roads, trails, and campgrounds to make the park accessible to visitors while still preserving its natural beauty. The U.S. Army’s efforts laid the foundation for the National Park Service and helped shape the way we view and protect national parks today.

It’s amazing to think that the same organization that is responsible for national defense also played a critical role in protecting and preserving one of America’s most iconic natural wonders. Experience the rich history of Yosemite National Park California and learn about the U.S. Army’s role as its earliest protectors.

Yosemite National Park California is home to a Mediterranean climate, which is characterized by mild, warm, and temperate weather. During the winter months, Yosemite Valley experiences the most rainfall with an average precipitation of 7 inches in January.

This heavy rainfall helps to create the stunning waterfalls and lush greenery that the park is known for. Summer, on the other hand, is generally dry, with an average precipitation of only 0.2 inches in August. This provides the perfect conditions for hiking, camping, and enjoying the park’s many activities.

The Mediterranean climate of Yosemite National Park California is a unique feature that sets it apart from other national parks in the United States. It creates a diverse range of ecosystems and habitats, from lush rainforests to dry chaparral, which makes it a haven for a wide variety of plant and animal species.

Experience the natural beauty of Yosemite National Park California and its unique Mediterranean climate with its mild, warm, and temperate weather that makes it a perfect destination year-round.

Yosemite National Park California is home to countless magnificent waterfalls. The best time to see these waterfalls is in spring (May and June) as the snowmelt is at its peak. Outstanding waterfalls in the park include Yosemite Falls, Ribbon Falls, Sentinel Falls, Horsetail Falls, Nevada Falls, Vernal Falls, and Chilnualna Falls.

It is one of the most powerful and ideal tallest waterfalls in North America, reaching an impressive 2,425 feet. These waterfalls offer visitors the opportunity to experience the raw power of nature and the beauty of the park.

Take a hike to one of the many waterfalls, or take a scenic drive to see them from a distance. Don’t miss out on the chance to witness the spectacular waterfalls of Yosemite National Park California. Plan your visit in spring to see them at their peak flow and experience the raw power of nature.

At sunset, the rock formations of El Capitan and Half Dome take on an otherworldly appearance, as if they are on fire. This unique natural phenomenon is known as “El Capitan Glow” and it’s a must-see for visitors to the park. But that’s not all, Horsetail Fall also presents a fiery glow at sunset when the light is reflected onto it in mid-February.

This phenomenon is known as “Firefall,” and it could be mistaken for lava spilling from a volcano. This natural spectacle is a once-in-a-lifetime experience and attracts thousands of people to Yosemite National Park California every year.

The best time to witness the Firefall is usually around mid-February when the water flow is at its peak and the sun is in a perfect position to reflect the light on the waterfall. The firewall only lasts for a few minutes before the sun moves, so plan your visit accordingly and make sure you don’t miss it.

Don’t miss the opportunity to witness the natural fireworks of Yosemite National Park California. Plan your visit around mid-February to experience the fiery glow of El Capitan and Horsetail Fall.

8. Unveiling the Natural Wonder of Yosemite National Park: Spotting Moonbows Amidst the Beauty

Yosemite National Park is famous for the magnificent rainbows that appear in the park’s waterfalls, but did you know that in late spring and early summer, visitors can also witness a rare and magical phenomenon called lunar rainbows or moonbows?

These lunar rainbows are extremely rare and require the perfect conditions to be visible, such as a clear sky and high humidity.

Photographers from all over the world make the pilgrimage to Yosemite National Park California every year to capture the unique beauty of these lunar rainbows. Don’t miss the chance to witness this rare and magical phenomenon and be enchanted by the lunar rainbows of Yosemite National Park California. Plan your visit in late spring and early summer and keep an eye out for clear nights to see this natural wonder.

Yosemite National Park California is a biodiverse area that supports more than 400 species of plants and animals. The Sierra Nevada red fox, a native to the Sierra Nevada of California, is a unique species with genetic roots dating back to the last Ice Age.

Visitors to the park can witness these amazing creatures in their natural habitats and learn about the park’s conservation efforts to protect and preserve them. Whether it’s a casual hike or a guided wildlife safari, visitors can explore the park and learn about the diverse species that call it home.

Experience the rich biodiversity of Yosemite National Park California and discover the wide variety of plant and animal life that call it home. From black bears to the rare Sierra Nevada red fox, there is something for everyone to discover and appreciate

Hiking is one of the best ways to experience the natural beauty of Yosemite National Park California, and there are trails for hikers of all levels. One of the most popular and challenging hikes is the Half Dome This hike starts on the Mist Trail, then to Vernal Fall, beyond Nevada Fall, and ends on the backside of Half Dome.

Another famous hike is the Yosemite Falls Trail which takes visitors to a spectacular lookout, where they can view the falls from above. It’s a great place to view the face of the Half Dome and is frequently visited by park users.

Take a hike in Yosemite National Park California and experience the natural beauty of the park on foot. From the challenging Half Dome Hike to the more relaxed Mirror Lake Trail, there is a hike for every level of hiker.