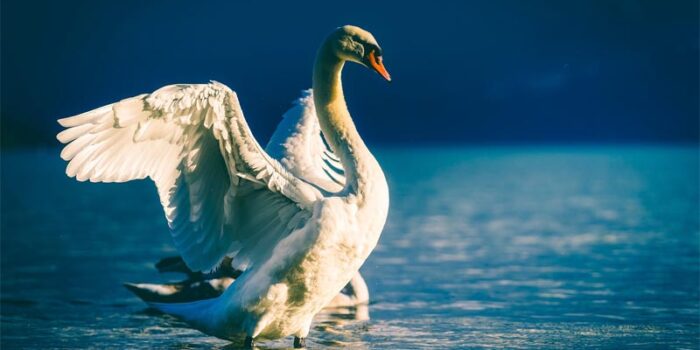 Swans look so beautiful and, the mark of elegance as these birds have featured on fairytales and amusement parks. Due to their graceful look, anyone can fall in love with their pure white feathers and classic neck curving. That’s why they are usually presented on ponds of public parks as well as on artificial bodies of water. I think no one in this world who will not fascinate by their look. Many species of swan exist in this world and, some 7-8 are related to black swans which, you will find in Australia. There are many interesting facts about the swan, which will astound you.

You know the swan has around 25,000 feathers in its body and, they are closely related to geese and ducks. They exist on both sides of the Equator across the Northern and Southern Hemispheres. The white swans with orange-colored beak generally find on the northern side. And the mixture of white and black with red, orange, or black beaks find on the southern side.

The interesting facts that human beings swan also have a partner permanently in life.  They are faithful creatures that mean that they just need one mate for the rest of their life. However, divorce may occur due to break off their bondage and mate with others.

The life span of swans is longer than other creatures. They live for around 20 to 30 years. But absolutely some variations exist between the different species of swan. The trumpeter swan is known as the largest swan in North America, which lives for an average life of 24 years in the wild world. And also famous for living up to 33 years in someone’s custody. But, a mute swan lives for an average life of 19-20 years, and the tundra swans have a similar life expectancy. The black swans of Australia and New Zealand, which find in North America and Europe, can live for up to 40 years in the wild.

Generally, swans are herbivores, they feed upon the aquatic vegetation. Interesting facts that for this Swan long neck helps them to feed on plants growing on river beds. They also eat small insects that cling to plants like mollusks, and small fish, frogs, and worms. But their main diet is natural vegetation.  They graze in fields, eating grass if it is available here.

Due to their bulky size, they have few natural predators in the wild world. The main predator of the swan is the human who hunts the swan for its meat and feathers. Other are wolves, raccoons, and foxes they prey both on the swan itself but also its eggs.

06: Different names according to genders

One of the interesting facts that gender discrimination swan is called by different names. A male swan is called a cob, and its female is called a pen. A baby swan is called a cygnet and, a group is called a wedge in flight. You know the amazing thing is that a cob acts responsibly towards its cygnets and for his partner. He always defends his family by making a blow using his knucklebone.

Swans also build their nests on land with twigs and leaves where the female swan lays 3 to 9 eggs. Interesting facts that the baby swan hatches out from their eggs after incubation of just over a month.

Swan can live in different environments like meadow, lakes, ponds, rivers, streams, and wetlands as well.

No doubt, they are full of grace, beauty, and angelic creatures. They are closely related to the species of the ducks-goose family and there is a Swan Lake ballet by Tchaikovsky, the most popular ballet on Earth.  People associate these attractive and innocent birds with purity, emotional freedom, and kindness.

Besides the interesting facts of a swan, this one is very amazing. If we say these attractive birds are highly intelligent, even more than the dolphins. So, it will of inappropriate. You know that swans remember can remember not only the human faces but also the way they treat them So, don’t you try to mistreat a swan – it will always remember that!

Swans are also including in one of the largest flying birds. The interesting facts besides the heavyweight of 15 kilograms and as long as 1.5 meters. They can easily fly in the air. As a concern to their wingspan, it can reach up to 3.1 meters. But the “friendly” geese are much smaller than these loving swans and have slighter feet and necks.