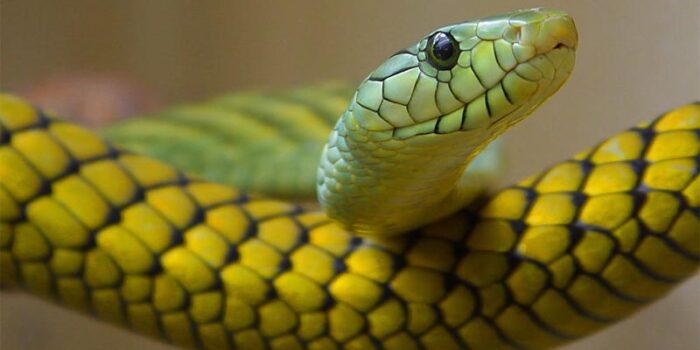 Snakes are the scariest creatures and related to carnivores’ group on the Earth. Some people also think that seeing a snake in their dream will bring bad luck to them. In the past, snakes were used in wars to trigger confusion and fear among the enemies. Snakes are worshipping as a god in some parts of India. Even in India, Nag Panchami is a major Hindu Festival where people worship snake. There are many interesting facts about the snake. You know the term “snake” has derived from Old English snaca, which means to crawl or to creep.

Snakes are closely related to lizards. They find in a large assortment of colors, ranging from dull to brilliant hues with striking patterns. The interesting facts that that snake. Which finds is in bright color and usually poisonous. They use their bright colors to inform hunters to stay off. You know the reticulated python has considered as the largest snake in the world it can grow up to gigantic 10.5 meters.

You know there is an island in Brazil, where you can find five snakes per square meter. Now this area has declared as no human zone. If you are traveling to Brazil, so it is better not to visit this snake island. However, it can be very dangerous for humans.

Snakes exist all around the world except some countries like Antarctica, Iceland, Ireland, Greenland, and New Zealand. It is one of the interesting facts about the snake that they don’t like cold regions that’s why they don’t prefer these places.

You know some snakes have lots of teeth up to 200. But interesting facts that snake, it doesn’t use their teeth for eating. They just capture their victim through their teeth. Besides using teeth, they swallow their whole prey.

This is one of the facts about the snake which you may know, it shed their skin periodically. You know it shed its skin to make a way for further growth. Its skin doesn’t stretch as it grows. At one point in time, when the stretching capability of the skin stops. So, they shed off their old skin layer.

Ophiophobia or herpetophobia is called the fear of snakes. Many people are suffering from this most common phobia in the world. The interesting fact that around 1/3 of all adult humans are ophidiophobic. Because, many humans have an inborn, evolutionary fear of snakes.

Have you seen any snake in flying? One of the interesting facts that some snakes can glide through the air so rapidly as it seems they’re flying. After getting the research on five species from Southeast and South Asia, scientists were able to determine just how the reptiles accomplish this feat. They used video cameras to record the animals in flight and create 3-D reconstructions of the snakes’ body positions. The research has shown that they can travel up to 24 meters from a branch at the top of a 15-meter high with constant velocity and without dropping to the ground.

As you know, snakes are reptiles, they are cold-blooded. It means they cannot generate adequate amounts of heat to keep their body temperature at a constant level. Instead of it, they are dependent on heat from their surroundings. Through the sun, they control their body temperature. That’s why they don’t prefer cold places where they occasionally find heat. Most snake species are found in humid and warm tropical regions.

The interesting facts that Snake can’t see very well or some time it finds blind. They just notice objects only if they move. Mostly they search their prey through vibrations. They have inner quality in their lower jawbones which, pick up vibrations caused by movement. They are sensitive to vibrations, mostly those made by land animals, but their most acute sense is the smell. A snake’s tongue helps it in smell. It flicks its long, split tongue to get chemical molecules from the air, land, or water. Its tongue transmits the smelly molecules back to two small openings in the roof of the snake’s mouth though they analyze the taste.

We have an image of aggression with mostly snakes and always take it as a poisonous creature. But this can be interesting facts for you that the snake is not generally aggressive. It also fears from their predators that’s they have a quality to camouflage themselves from them. It is one of the most common means of defense. Most snakes merge into their environments while some have evolved to look like another, deadlier snake.

One of the species of snakes is the venom of King Cobra. It considers the world’s largest poisonous snakes. One of the interesting facts that the King Cobra can kill a gigantic animal like an elephant also.