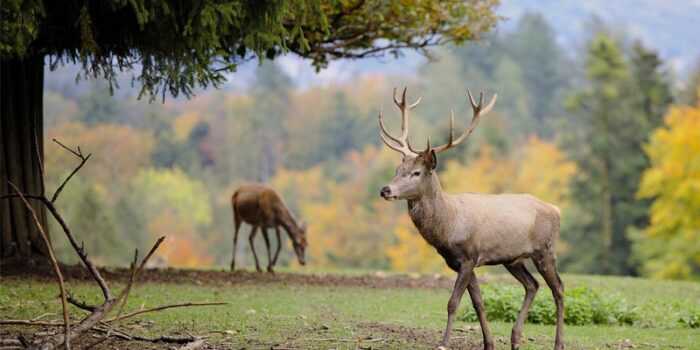 Deer are hoofed ruminant mammals which, divide into two major groups. One is Capreolinae and, the other is Cervinae. Fallow deer, chital, and muntjac are related to the Cervinae group. Others are related to the Capreolinae group. They found in all most all regions except Australia and Antarctica. It is a general fact that deer can’t survive in Antarctica but, it is fully doubtful why they don’t find it in Australia. There are many interesting and fun facts about deer.

Deer are herbivores means they just take a diet from grass, leaves, plants, fruits, acorns, and nuts when they are available. Male deer are called bucks, female deer are called does, and fawns are young ones. Only the male deer grow antlers, but there is a different case in the reindeer.

Almost all deer have antlers and, they grow as well. But reindeer don’t have. It is a biological structure that is unique to deer. Ruminant deer have horns they are slightly different from them. Antlers comprise bony extensions from the head with no covering of keratin as found in true horns. Adult buck antlers starting to grow around the last of March or early April, and it grows at the rate of around a quarter-inch per day. Younger bucks begin growing their antlers a little later and slower than adults. Antlers’ growth is one of the interesting facts about deer.

You know deer are just like humans an adult deer has 32 teeth. But the interesting facts related to deer have no upper teeth in the front of its mouth. This space has filled with a hard-surfaced pad of gristle instead of upper teeth.

08: They are the most dangerous creatures too

One of the interesting facts about deer has strong less. You know a whitetail deer can jump up to nearly four feet high and 30 feet long. Besides lean but strong legs they can also run up to about 50 mph for short distances.

Bucks lose up to 25 percent of their body weight from the constant seeking and chasing of does during the rutting season. This wanes them a lot in winter when they are very defenseless in extreme coldness and deep snow.

One of the interesting facts about deer has amazing senses. They have eyes on the sides of their head, which give them a 310-degree view. This wide view makes it hard for deer to give attention to a single point. Plus, they have a good night vision, which is useful also useful in the early morning and near twilight.

Besides the good sight, they have a great sense of hearing also. They have a lot of muscles attached to their ears, which enable them to turn their ears in any direction, without moving their heads. You know they can also hear higher frequencies of sound than human beings.

Additionally, like a sense of hearing and sight, they have an excellent sense of smell too. This sense of smell allows them to detect hunters from a long-distance away. Deerlick their nose to keep it moist, which helps odor particles stick to it, which also improves their sense of smell.

You will find sometimes deer in a herd as they are social animals also and travel in groups. Mostly dominant male deer lead this herd, though with some species the herds are segregated by sex. Sometimes the and female deer have separate herds. In other cases, a female herd is scrutinized over by a male herd. Some reindeer also travel in a herd that is comprised of around 100,000 members.

One of the interesting facts about deer is their attractive appearance. The majority of deer are in light to medium brown color. You have heard and read in many myths and folklores about white stags, you know they also exist in real life. A white stag occurs when a deer has suffered from a specific condition “leucism” which causes the hair and skin to lose its natural color. When white stags are spotted, it is often not publicized to prevent thieves. As they find them for getting thousands of pounds after selling.

Deer are herbivores; they just eat natural vegetation. In majority, a deer’s diet consists of grass, small shrubs, and leaves. However, they will feed from trash bins and in gardens if they cannot find the vegetation they need elsewhere. One of the interesting facts about deer is that they have one main stomach and three “false stomachs.” Like cows, they chew their feed to fully digest it.

Although all deer are very attractive and beautiful in all around the world. But, there is the smallest deer in the world has called northern Pudu. The interesting fact about this deer is that it has just weight from 3.3 to 6 kg, while it has the length at the shoulder of 13 to 14 inches.