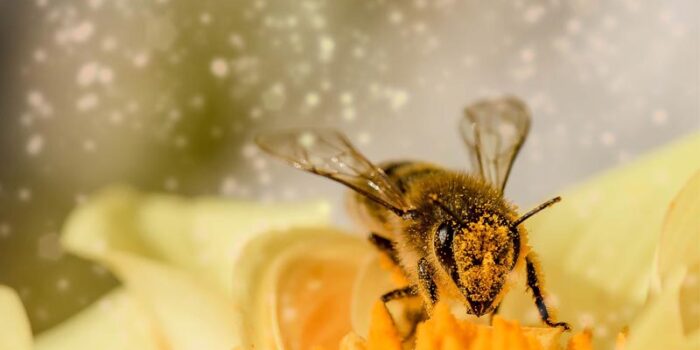 Honey bees are famous for making the rich golden liquid miraculous product. Naturally, this syrup is delicious and an alternative to white sugar. We know a lot about honey and its benefits, but many of us don’t know how and where it comes from. Honey bees do this fascinating process of making honey when they feast on flowers, collecting the flower nectar in their mouths. This sweet nectar then combines with special enzymes in the bees’ saliva, through this process it turns into honey. There are a lot of interesting facts about the honey bee that how it works to collect this sweet honey for us.

Honey bees live in a hive, where they are divided into three categories Queen, Worker, and Drone. Queen is a special bee that does not work in a hive and just lay eggs. It lays almost 2000 eggs on a good day and approximately every 45 seconds. Every honey bee contains five eyes and four wings that are latched into pairs by hooks.

10: Worker honeybees are all females

One of the interesting facts about the honey bee that just female bees work in a hive. Males do not know even how to feed themselves and, they just here for reproducing with the queen. The males do not have a stinger and, in winter they are kicked out from the hive because they are useless for them. The life span of the queen bee is up to five years. She remains busy in the summer months when she can lay up to 2,500 eggs in a single day.

Another one of the interesting facts about the honey bee that it never sleeps in its life. It is no wonder because it has a very short span of life.

Generally, a beehive can produce from 30 to 100 pounds of honey in a year. For producing a single pound of honey, a bees’ colony must have to collect nectar from around 2 million flowers and have to fly 55,000 miles. This amounts to a lifetime’s worth of work for about 800 bees.

Honey’s flavor is dependent upon the source of the nectar from where it was made. There are many honey flavors are available like linden honey is delicate and woodsy, buckwheat honey is strong and spicy, and eucalyptus honey has a delicate menthol flavor. The darkness or lightness of certain honey varies as well due to nectar.

07: A honeybee produces an amount of honey in its lifespan

For making one pound of honey it would take 556 workers bees and around 2 million flowers. Approximately, 50-100 flowers have been pollinated on a single collection trip. For getting one ounce of honey is all it takes to give the honey bee enough energy to fly worldwide. One of the interesting facts about the honey bee that it produces 1/12 of a teaspoon of honey for its lifetime.

The highest speed of honey bees is 15-20 miles per hour, but they are not the fastest fliers in the bug world. That’s why they’re made for short trips from flower to flower, not for long-distance hauls. Their tiny wings must flap 12,000 to 15,000 times per minute just to keep their bodies aloft for a flight home to the hive. Because of that time, they are fully loaded up with pollen.

Every hive just has one queen bee which, work is just to lay eggs. But it is a law of nature one day it also has to die. The interesting facts about the honey bee that if the queen bee dies. So, the workers will create a new queen by choosing a young larva that hatched from a baby insect. They feed it special food called “royal jelly “. This special diet enables the larva to develop into a fertile queen for the hive.

One of the interesting facts that each honey bee has 170 odorant receptors. These receptors have one serious sense of smell. They use them for communication within the hive and to recognize different types of flowers when looking for food.

You know honey bees use the most complex symbolic language on Earth. These insects have a million neurons in a brain that measures a mere cubic millimeter—and they use every one of them. As you know the worker bees perform different roles throughout their lives. Searchers must have to find flowers, determine their value as a food source, navigate back home, and share detailed information about their findings with other fellow beings. So, for this, they have a complex language. One of the interesting facts that honey bee shares this information with hive mates through an intricately choreographed dance.

Karl von Frisch, a professor of zoology in Germany, spent around 50 years researching honey bees’ language. Due to this research on the waggle dance of bees, he earned the Nobel Prize in 1973. Additionally, bees use a variety of odor signals produced by secreted pheromones to communicate.

02: Drones die after mating with the queen

Male honey bees are called drones they don’t work in a hive and just serve only one purpose. This purpose is to provide sperm for the queen. Interesting facts that after about a week of emerging from their cells, they are ready for mating. After they’ve mated with the queen bee, they immediately die.

01: Constant temperature of the hive

As you know, the temperature never remains the same. As temperatures fall in winter, but the bees form a tight group within their hive to keep it warm. Workers always cluster around the queen, protecting her from the outside coldness. In summer, worker bees fan the air inside the hive with their wings. They keep protecting the queen and brood from overheating. You can even hear the hum of all those wings beating inside the hive from several feet away also. Interestingly, the temperature of the hive remains 93° Fahrenheit all-around year.