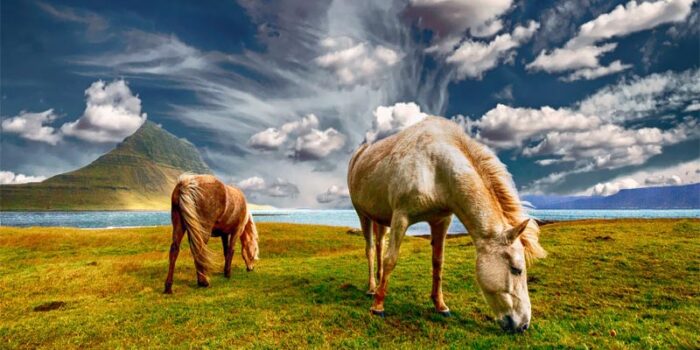 Horses’ unique coloring always fascinate horse lovers. They are famous due to the noblest of creatures. In history, it had been a man’s original best friend since anywhere from 4000 to 2000 B.C. They were used in traveling as well as on the battlefield also. I am sure there are plenty of interesting facts about the horse which you still don’t know. Horses are not wild creatures as they have used in domestic for 5000 years ago.

There are many breeds of horses which used as a companion of humans but, there is a breed known as the Przewalski’s horses. It is called the Mongolian wild horse, which is an endangered species that live in the forests of Mongolia and China. There are many more like silver gene is recognized to affect a handful of breeds such as Morgans, Icelandic Ponies, Shetland Ponies, Miniature Ponies, Quarter Horses, and the most common, Kentucky and Rocky Mountain Horses. They have been included in the largest land mammals in the world. The male horse calls as a stallion and, a female horse is a mare. A male horse that has been castrated is recognized as a gelding. However, young male calls as a colt and the young females are fillies.

There are three main creatures in the world like humans are omnivores, lions, and wild animals are carnivores, and horses categorize as herbivores. Herbivores are those creatures that just take diet from natural vegetation. The way their teeth are formed, the position of their eyes, and the sort of digestive system which has bestowed to it. Interesting facts that a horse all features are relating to herbivores.

09: You Can estimate a Horse’s Age by Its Teeth

You can’t tell the exact age of a horse through its teeth, but you can estimate its age also like other herbivore’s animals. The horse also needs proper equine dental care for its teeth. Sometimes happened a horse lives longer than its teeth do, so it is important to do extra care while feeding senior horses.

It is one of the most common questions about horses that “how long does a horse live?”. This is including in one of the interesting facts about the horse that they live longer than others almost up to 30 years. So, it is very important to know about horse nutrition, its care, and veterinary medicine, which can increase its life. As through care, a human life expectancy has increased, so has horsy longevity also.

As dogs may have become domesticated around 14,000 years ago and cats became human companions about 8,500 years ago. Interesting facts that horse has also become companion around 3000 years ago. The human’s relationship with horses is very old. They used traveling, battlefields, and for many purposes in past.

As you know a horse is called by many names like a male horse is a stallion and a female horse is a mare. So, a baby horse calls as a foal. These names are all dependent upon gender and age. Whatever they are called horses remain fillies or colts until they are two years of age.

05: An adult horse’s brain weighs the same as a small child’s brain

One of the interesting facts about the horse that it weighs the same as a child’s brain. Whatever the size or weight of the brain but, there is a huge difference between a human brain and a horse brain. A horse uses its brain for analyzing information it receives from the environment. But humans are sensible creatures they use the human brain for fine-motor skills, language development, and multi-tasking.

04: Horse meat is a delicacy

As horse meat is not for eating and banned in many countries but in certain countries, like France, its meat considers as an expensive delicacy. The French people enjoy eating horse heart and horse brains a lot.

03: The American Quarter Horse is the World’s most popular Breed

It is appreciated by beginner riders and professional horsemen. American quarter horse considers as the world’s most popular breed. It is popular due to many positive features like its gentle nature, versatility, beauty, speed, agility, and loyalty, etc.

You know the interesting facts of horse that it is the color blind creature. Professionals used to believe that horses are completely color-blind, but it is not true. They can see colors also like other creatures, but they just can see certain colors a lot clearer than others.

A horse is a creature that can see better at night than a human being. However, it takes a lot of effort to horse’s eyes longer to adjust from light to dark and from dark to light than a human.

As they used in multitasking interesting facts that horse is a social animal. You know it will get lonely if kept alone, and they will mourn the passing of a companion They are best communicators as they use their ears, eyes, and nostrils to express their mood. They also transfer their feelings through facial expressions.