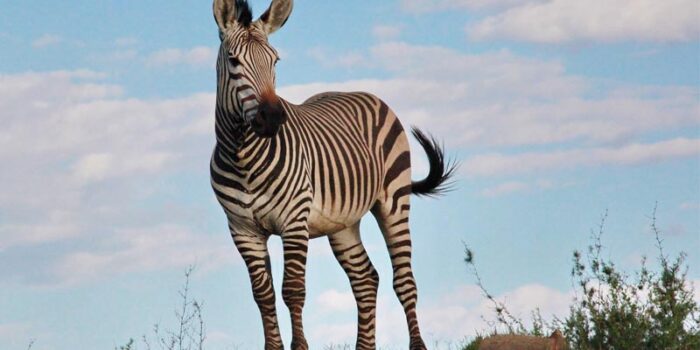 Zebra is a mammalian animal having white and black stripes on its body. There are three species of zebra found in the world like plain zebras, Grevy’s zebra, and mountain zebra. Plain zebra exists in rich grasslands over much of eastern and southern Africa. Grevy’s zebra lives in arid, sparsely forested areas in Kenya and some parts of Ethiopia. The mountain zebra inhabits dry grasslands in Namibia and a few scattered areas of western South Africa. There are many interesting and fun facts about zebra, which will increase your knowledge about them.

10: All zebras don’t have white and black stripes

As you know, zebras have three species and many subspecies also. They come in different sizes, body shapes, stripe patterns, and even in slightly different colors also. The white stripes can change into cream color and, the dark stripes can be black or brown. In some subspecies of zebra also has pale, shadowy stripes between the larger dark ones. Furthermore, there are all sorts of transformations and variations in them.

One of the interesting facts that every zebra has a unique pattern of stripes. Even scientists can use these patterns like bar codes to identify individually in a herd and keep track of them over time. Hans and Ute Klingel, a researcher couple founded stripe recognition with Grevy’s zebras back in the 1960s. Initially, they took photographs of a bunch of zebras. Then, they developed the pictures in a dark room they created in the field. After that, they created a card index with handwritten codes and some notes on each animal’s pattern. Through this, they identified them.

Zebra’s one category is the mountain zebra it lives mostly in hilly and rocky places of South Africa and some parts of Namibia. Particularly it has hard, sharp hooves that help it in climbing. So, they have a rugged body due to survival in their environment.

08: Zebras are in trouble

Besides interesting facts of zebra, it can be sad one-two out of the three zebra species aren’t doing so well. The species of Grevy’s zebras are in trouble they are losing habitat, being hunting, facing scarcity of food and water with domestic grazing animals. And also, the disease has all taken their toll. The International Union for Conservation of Nature (IUCN) labels them threatened and says they’ve suffered one of the most substantial reductions of range of any African mammal. There are only just 2000 of these species of zebras left.

Mountain zebras are also facing similar threats, and also listed as Vulnerable, which is one rung better than scarce. There are around 9000 left. We need to think about the Preservation of zebras because they’re amazing and beautiful creatures.

07: Diet and Behavior of zebras

All zebras are grazers, bulk, roughage feeders that need to consume large daily quantities of grasses. But the interesting facts that as zebra have categorized in different species so their diet patterns and behavior are different. They are also all full migratory species, which migrate seasonally or year-round depending on seasonal vegetation variations and habitat. Mostly they follow long grasses that grow after the rains. Mountain and plains zebra species live in family groups or harems, classically consisting of one stallion, several mares, and their juvenile offspring. Bachelor zebras also exist and they have different groups.

Breeding males defend their resource territories that range between one and 7.5 square miles; the home range size of non-regional zebras can be as large as 3,800 square miles. Male plains zebras ward off predators by kicking orbiting them and are famous to kill hyenas with a single kick.

One of the interesting facts about zebra that you can just find in Africa where they inhabit a wide variety of habitats. But caged zebras, however, can be seen in many zoos and animal farms around the world. The wild zebras live in many different kinds of environments. They exist in savannas, grasslands, mountains, coastal hills, woodlands, and scrublands. They also find in the north-central portion of the continent, near Ethiopia, to the southern part of the continent.

Like other animals’ zebras are also social particularly the plains and the mountains zebras. Usually, they live in harems with its surroundings. They have good vision and excellent hearing abilities. For protection, zebra harems often graze together with other grazers like the wildebeest. The huge number of grazers means there are more eyes and ears to warn the gathering about any obtrusive predator. Social able quality is one of the interesting facts of zebra.

Zebra excellent speed can outpace their predators because they run at the speed of up to 65 km per hour. Due to their high speeds, zebras can escape fast-running predators like lions. Even zebra’s foals start running with the herd after a few hours of birth. Interesting facts that zebra also participates in the annual 1,800-mile migration in search of water and food from Serengeti, Tanzania to Masai Mara, Kenya.

Their fierce fighting skills and strong social bonding help in protection from predators like lions, leopards, hyenas, and cheetahs. When under threat, these awesome animals form a semi-circle for facing the attacker. And if one of the groups is injured, other zebras will circle and attempt to drive off the hungry attacker. It is an amazing quality of zebra, which are including interesting facts.

Besides social ability, they also show their mood through some clues. Like zebras show moods through ears.

Interesting facts of the zebra, that their average life span in the wild world is 25 years and up to 40 years in captivity.