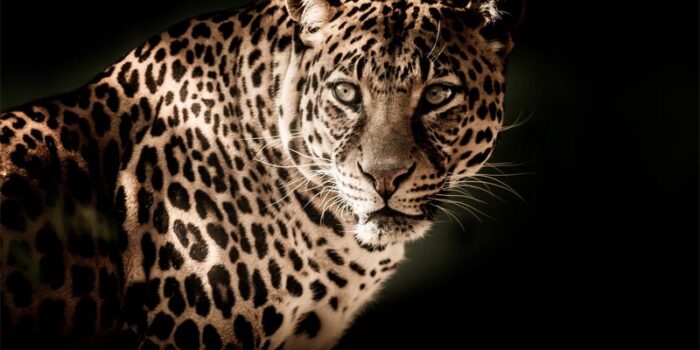 Human beings are always attracted to large cats’ mean leopards. In English, the word “leopard” originated from the old French “leupart” or “liepart”. In return, it derived from the Latin word “leopardus” and the Ancient Greek “leopardos.” There are many fun and interesting facts about the leopard.

10: They can survive in Harshest Conditions

Snow leopards are well known for their beautiful and attractive white-spotted coats, which are best for hiding in the snow. Interesting facts about these types of leopard, that they can survive in the harshest conditions. They roam in mountaineer areas where temperatures are extreme, and the landscape is rough. They have created to endure harsh elements due to their thick furry bodies. Its hair is up to five inches long, with the thickest part on its underbelly. Even at the birth time also its coat is remarkably thick as compare to cubs of other cats.

09: It can jump far distances easily

Interesting and fun facts that leopard not only can survive in harsh conditions but also they can jump far distances rapidly. These strong and sturdy cats have short front legs but longer hind legs that give them a mighty push when they leap. It also allows them to jump up to 30 feet in just one remarkable leap. During catching victims, they often only need to bounce once before they attack.

One of the interesting facts about leopards that they rarely had seen with others of their kind. Because they have been recognized for solitary creatures. During the mating time, when a mother raises its cubs. Rarely snow leopards seen together in a group. Their mating season starts from January to March and, then females separate from the male and give birth between June and July. They will have 1-5 cubs altogether, though generally only two or three. These cubs at the beginning of their life, start eating solid foods after a few months. And in the recycling procedure, the females will begin to mate shortly after, but males usually do not mate until they reach four years of age.

07: The dark spots on their bodies are called rosettes

The leopards which have dark spots on their bodies are called rosettes. These have beautiful and attractive dark spots on their bodies. The light fur on the body of a leopard creates such a beautiful pattern that makes leopards stand out amongst all other big cats. However, interesting facts about the leopard that these spots on the body are difficult to see in black leopards as they have very dark fur. Due to their ‘dark’ appearance that black leopards are typically known as ‘black panthers.’

06: Protective of their cubs

After each gestation period, it is naturally every leopard give birth to two or three cubs. It is general for mothers to refrain from wandering around in their territories after giving birth. They take a lot of care until their maturity. Cubs tend to suckle for about three months for getting a nutrient diet. Leopards also being protective of their cubs. Interesting facts that leopard keeps their cubs hidden entirely from predators for the first eight weeks after birth.

Besides another one of the interesting and fun facts, this one is exceptional that Amur leopards are nocturnal and solitary animals. That is why infrared camera traps them while taking photographs in the dark environment.

The Amur leopards don’t have any specific breeding season, their gestation period remains 12 weeks and, the females give birth to 2-3 cubs normally. The interesting facts that leopard cubs are born blind and weigh around just half a kilogram. As they’re so weak after birth, the mother keeps her cubs hidden for about 6-8 weeks.

03: Leopards can eat anything

Leopards are carnivorous creatures and can eat any available protein source. They can eat huge animals but, they may also track and hunt monkeys or rodents. The most favorite food of snowy leopards is sheep and goats. Arabian leopards exist in the desert so, they hunt gazelle, hares, birds, and lizards are their most important food groups. Arabian leopards’ prey is stored in caves. African leopards find a huge variety of food and hunt at least 92 species of prey.

02: Leopards Communicate with other Leopards

Through different research, Leopards communicate with each other via a variety of vocal sounds that are similar to other large cats. Though they have individual and distinct sounds for call, probably they might recognize each other from a distance to prevent contact.

Interestingly, leopards might roar, hiss, growl, moan, yowling sound. These leopards are just the same as your cat at home they make purr also when they are pleased! Mostly Purring observed during communication between a mother and her cubs when the cubs or feeding. Their roar seems like a person sawing through a heavy piece of wood. And, it seems that they are alarmed or to prevent another leopard from coming any further into their region. Leopards may use their raspy cough to inform other leopards about their presence.

01: They have plenty of enemies as well

As they are very smart and the strong creatures but leopards have many enemies also. In many parts of the world, they share their environment with other large predators like tigers, lions, cheetahs, different sorts of hyenas, African wild dogs, dhole, and many more other gigantic creatures.