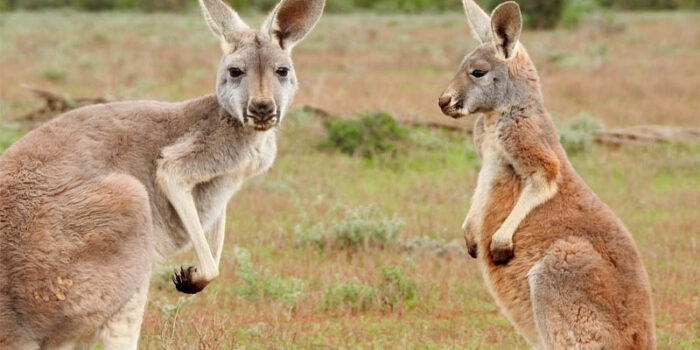 Kangaroo means “Big footed” animal which, is found in the areas of Australia and has a tail too. They are related to the family of Macropodidae and have four common species like the red kangaroo, the eastern grey, western grey, and antilopine, etc. Kangaroo is the informal symbol of Australia and, often this creature has got a tail with its body, powerful hind legs, and open feet. The Kangaroos’ tail permits its balance while making different movements. Here are some interesting facts about kangaroos that will make you entertained by it.

Kangaroo has chambered abdomens that helps indigestion. Plus, it has particular teeth that assist it in regurgitate shrubs and grass and chew them again before swallowing. Interestingly they have also consisted of those animals which can stay without water for 2 -3 months easily.

They can travel more than 56km/h and jump more than 9m in a single bounding amazing! Which is more than six ten-year-old lying head to toe. They have small front legs and a long, bushy tail which, assists them in balancing while jumping. It is one of the tallest of all our planet’s pouched mammal these interesting Kangaroos can stand over two meters tall, that counts in remarkable facts. Plus, it is one of the fastest animals on the planet even, more than a horse. Once they leap, they can reach 7 meters far easily.

Kangaroos are herbivores and, they like to chew on grasslands, herbs, and bushes. They have to face few natural predators like humans and wild dogs called dingoes. They also have to face heat, drought, and starvation due to the vanishing environment are amongst the dangers these amazing pouched mammal face. Kangaroos eat a mineral-rich diet that is very good for herbivores’ creatures.

The sense of hearing of Kangaroos is also an amazing factor. Interesting facts that kangaroos move their ears to different directions and the headstands still. This movement means that they turn their radar on. They do this to hear the sound from the predators.

07: Kangaroos are the National Symbol of Australia

When you are in Australia and deciding to buy souvenirs, you will find many kangaroos pictures as a symbol in every souvenir. It is because Kangaroo is a national symbol so, it can be found in coins, postcard, or even stamp of Australia. It counts as one of the interesting facts about Kangaroos.

06: The internal temperature of Kangaroos

Like many mammals, they have different body temperatures according to the environment also. The internal temperature of red kangaroo has been measured up to 97 degrees F. Interesting facts about kangaroos that their temperature has maintained through the homeostasis.

05: Females have a safety pouch

Female kangaroos have to sport a pouch on their belly to cradle baby kangaroos, called joeys. Newborn joeys are small, just 2.5 centimeters, or even about the size of a grape – pretty! After birth, they travel unassisted through their mother’s thick coat to the relief and safety of the pouch. Interesting facts that unlike other mammals Kangaroos’ newborn can’t suckle or swallow, so the mum uses her muscles to pump milk down its throat. At the age of 4 months, the youngster appears from the pouch for short trips. At the tenth month, old kangaroo became enough mature to leave the pouch for good.

04: Super bonding in a family

The term ‘Kangaroo’ actually signifies a super-family. That’s why we use the term of kangaroos to describe all species inside this super-family identified as macropods. Interesting facts that kangaroos have broken down into two prominent families – the Macropodidae and the Potoroidae. The Macropodidae family comprises Red and Grey Kangaroos like Forest Wallabies, Wallabies, Wallaroos, tree Kangaroos, and Pademelons. The Potoroidae family is comprised of Bettongs, Potoroos, and Rat Kangaroos.

Mostly kangaroos are found in Eastern Australia, where they spend life in small groups which, are called troops or herds. They have typically made up of 50 or more animals. If threatened, kangaroos smack the ground with their sturdy feet to aware and warn the others in the herd. When these cool creatures aren’t to be messed with – when they fight, they punch and kick others with powerful blows, and will sometimes even bite. Interestingly, male kangaroos often fight each other over access to females.

Kangaroos have made for walking forward. Interesting facts that Kangaroos cannot walk backward, that is why they have chosen to appear on the Australian coat of arms.

01: Kangaroos’ meat is legal in Australia

You know there are not as many humans in Australia as kangaroos are living in abundance. Besides the informal symbol of Australia, they like to eat their meat. Maybe it is due to the profusion of this creature. Anyhow, its meat has attained the authorized for human consumption throughout Australia only in 1993.