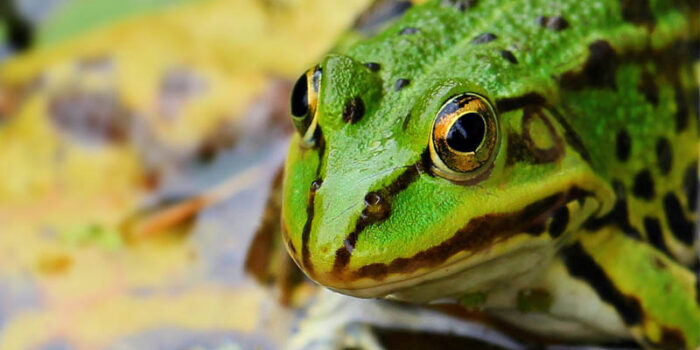 Frogs are amazing creatures of God; their color indicates the quality of the environment. They go from living entirely underwater to an animal that respires air. There are so many charming and interesting qualities and facts of frogs! In this top ten list, we’ve composed some of the frog’s facts that you might not have known.

Many species of frogs exist in this world. The most famous is a poison which, is the most amazing, highly adapted animals on the planet. Most people think that frog is green colored creatures, a semi-aquatic animal with webbed feet. Which typically hides away during the day and lays hundreds of eggs in ponds. But the Poison Dart frogs break all these rules and different one! Another of the largest existing species of frogs in the world is the Goliath frog that grows up to 13 inches and weighs about 8 lbs.

Interestingly, you know each species of frogs have a unique call. They make different dialogues by forcing air through their larynx. Males sing in loud choruses to inform other males about the danger and also for attracting the female frogs too.

10: There is no taxonomic difference between frogs and toads

There are approximately three different stages of the frog. These are ovum, larva, and adult. Interesting facts that as frogs nurture, they interchange through these stages and this process is called metamorphosis. Many other creatures also undergo the process of metamorphism in which amphibians also experience a remarkable change throughout their life cycles, as do many species of invertebrates.

As you know, all the creatures are relying upon three main categories like omnivores, carnivores, and herbivores. Interesting facts that frogs are carnivores they take feed from insects and other invertebrates. Some species of frogs also get feed on small creatures such as birds, mice, and snakes. Many frogs wait for their hunt to come within its range and then swing after them. Few species are active than others and, they follow in pursuit of their prey.

One of the interesting facts about frogs, they are considered in those creatures which have teeth on their upper jaw. They use it to keep their prey in one place until they can swallow it. Furthermore, frogs swallow the feed using their eyes; its eyes retract into its head and help them to push the food down to its throat.

Another one of the interesting and unique facts about frogs, they don’t drink water with their mouths. They absorb water through their skin and fulfill the drinking need. Interestingly, frogs have leaky skin, which means fluids and gases can pass through it. It is a bad thing to having permeable skin. They are at risk of absorbing water whatsoever pollutions are mixed in it. Additionally, water is a basic requirement and, they can easily get dehydrated if they are away from water for too long.

Frogs come in different and bright skin colors from cobalt blue to strawberry red warn predators of their poison. Many other species are found in numerous designs and colors, with the Strawberry Dart frog, Oophaga pumilio, being one of the most polymorphic creatures in the world.

Contrasting to most of the tropical frogs which, are only active at night due to the fear of predators, poison frogs’ skin toxins and warning coloration let them be diurnal. Interesting facts about the dart frogs they have different behavior from normal frogs. In which some species spending their time on the woodland floor chasing through leaf litter, whereas others are great climbers.

Green and black dart frogs work as a cooperative member of a team when it comes to child care. Interesting facts about the female frogs that they lay clusters of up to 13 eggs in leaf litter after that, males take care of the eggs before carrying the hatchlings on their backs to small still-water sources in the trees.

02: They eat their members too

African bullfrogs are notorious for strange behavior as it eats its members of their species on different occasion. Plus, there is no family bonding they even don’t care about their kids. They have even known for eating their offspring.

As you know, many creatures hibernate in winters but interesting facts that Wood frogs don’t mind the cold. Up to a third of this frog’s physical liquids can save them from freezing. It also allows them to survive in temperatures of 23 degrees Fahrenheit easily.