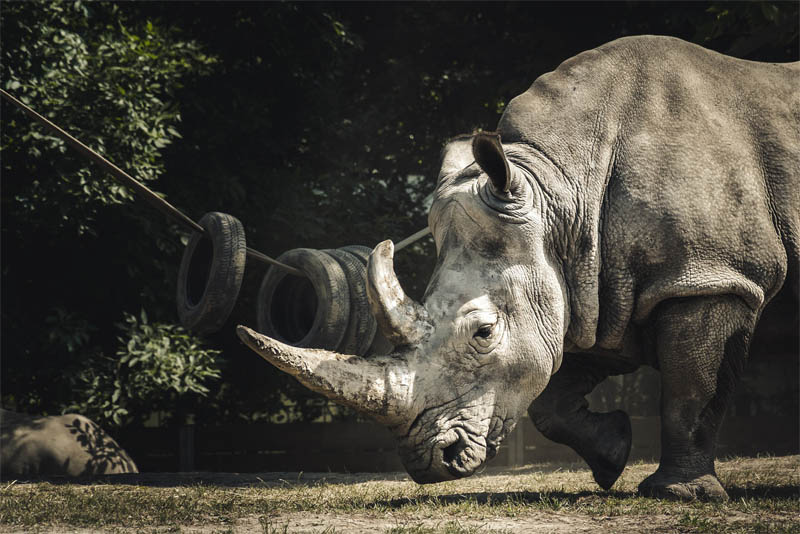 Rhinoceros’ nickname is the rhino, the second largest mammal on the planet after the elephants. Rhinoceros exist in the areas of Africa and Asia. Approximately, five known species exist in this world but, all of them are endangered because of excessive hunting and violation. The main reason for their killing is its valuable horns which are used for multiple reasons. Let me list down some of the interesting and fascinating facts about the Rhinoceros.

The term rhinoceros means “horned nose” and once this creature wandered and made their homes in North America and Europe. Now they are found in Asia and Africa as well. The first rhinoceros who wandered on the planet was the Woolly Rhino which, lived around 50 million years ago. There are around five different sorts of Rhinoceros present in this world. The main species are Black and white rhinoceros, both are living in Africa. While the other are greater one-horned or Indian rhinoceros, Javan rhinoceros, and Sumatran rhinoceros rest of all exist in Asia. White rhinoceros have a flat, wide, and broad mouth and are called “grazers” as they eat grass from the ground. Black rhinos are “browsers” because they have beak-shaped lips and, they consume leaves and twigs from trees while eating.

Wretchedly, it’s appraised now just about 29,000 rhinoceros left in the wild world, as compared to 500,000 at the beginning of the 20th century. They are killed due to their attractive horns used in traditional folk medicine, particularly in Asia.

Rhinoceros are herbivorous as they just consume natural vegetation. You know black and white African species of rhinoceros don’t have teeth. So, the interesting facts that these rhinoceros pluck the food using the lips instead of teeth. That is amazing.

09: Both humans and rhinos have keratin in their bodies

Usually, white Rhinos have the longest horns. They have recorded as around 1.7 meters long! Wow! The Black, White, and Sumatran Rhinoceros normally have two horns. But the other species like white Indian and Javan have only one. Even some Javan Rhinoceros females don’t have any horn at all. You know its horns are not made of bone and linked to the Rhino’s skull. Interesting facts about Rhinoceros horns are made from keratin. It’s the same matter that from our fingernails are made. That’s why they have a close similarity to humans.

Unlike elephant tusks, rhinoceros horns are compact and not deep and continue to grow throughout its life. If it survives from poachers’ attack and during survival horn became damage then, no worries it will grow again.

A rhinoceros’ gestation period is comprised of 15 to 16 months and, females became very virtuous and protective mothers. Like most mothers, they always keep an eye on their calves. Interesting facts about Rhinoceros that calves stay with their mother up to 3 years until gain maturity and don’t leave home.

05: A Rhinos Best Friend is the Oxpecker

As you know a rhinoceros prefer to live alone from other of its kind, but interesting facts about them that they like to make companionship with oxpecker. These beautiful birds gather in groups and will often found sitting on a rhino’s back, eating bugs on their skin. These birds also assist them and also make them aware of surrounding dangers.

As you know Rhinoceros are huge creatures but, they have very poor eyesight and are near-sighted. Due to its huge body, it cannot move its head properly. They try to see someone like a poacher or something else until it’s almost right in front of them. So, when it sees, the person or object, it’ll usually charge for itself for protection.

Rhinoceros have thick skin looks very tough. However, it is quite sensitive to sunburns and pest bites. That’s rhinoceros-like to stumble and roll around in the mud for the protection of its skin. When the mud dries it protects the rhino’s skin from the sun and bugs.

02: Rhinos need the same amount of sleep as human adults

Like human beings, Rhinoceros also need about eight hours of sleep per day. They can sleep everywhere whether they are standing lying down. When they fall into a deep sleep, sometimes they found lying down with their feet curled up slightly to one side how cute!

Rhino horns are highly desirable and are treasured due to their horns that are cost more than gold in some parts of the world. Interesting facts about Rhinoceros horns that traditional Chinese medicine holds that the horns possess healing properties, they have been used as an aphrodisiac, and in Yemen, they have prized as dagger hilts.