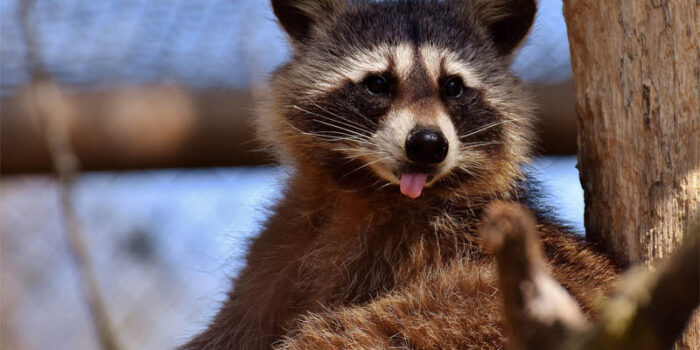 Raccoons are round-shaped, amphibolic creatures with shaggy tails and a black mask of hair that covers their eyes area too. They may look like cute, fluffy bandits, but they can be quite tremendous when coming near. Raccoons are around the size of small dogs. They grow to about 23-37 inches and weigh up to 4 to 23 lbs. They exist in North and Central America, Europe, and Japan. They are adaptable creatures so they can live in a wide range of climates and habitats anywhere. Typically, they make homes, which are called dens, mostly in trees or caves however, they also make homes in barns, abandoned automobiles, and other artificial locations too. There are a lot many interesting facts about raccoons maybe you were unfamiliar with them.

Particularly, humans should take caution about the raccoon, as they like to live in human places and they are common carriers of rabies, roundworms, and leptospirosis, Most of the experts do not recommend you to make a raccoon as a pet.

Raccoons are omnivores so they eat vegetation and meat both. The vegetation in their diet contains cherries, apples, acorns, persimmon trees, berries, peaches, juicy fruits, plums, grapes, figs, beech nuts, corn, and a walnut tree, etc. When it comes to meat, they like to consume more invertebrates’ creatures than vertebrates. Anyhow the interesting facts about raccoons that its favorite animal treats are frogs, fish, crayfish, insects, rodents, and bird eggs. When they don’t find these types of the item as they can eat humans’ trash also.

09: Raccoons behavior and their activities

Raccoons are not social animals like dogs; they are introverted. They are nocturnal creatures, so mostly you can find them at night because they sleep most of the daytime. You can find them in the daytime but rare. Interesting facts about Raccoons that they are solitary creatures, so they prefer to live alone. A group is mostly comprising of the family the mother and her babies. In winters, they don’t hibernate like other mammals they sleep more than usual. They can endure the cold temperature due to stored body fat. That’s why in winter, they tend to lose around 50% of their weight. They are super active during the other season like summer, spring, and fall.

Raccoons’ certain behavioral habits indicate about their cleanliness as they wash their food in water streams before they consume it. They also dig the ground and create latrines in areas that they visit often like humans Wow! They are highly delicate creatures, and the association of water increases their delicacy.

Even though raccoons have tiny clawed paws but they are great for climbing, they are also startlingly sensitive to touch. One of the interesting facts about raccoons that they have four to five times more sensory cells in their paws. Plus, 75% of the part of their brain that develops sensory signals is devoted to touching.

Raccoons rarely attack humans, but sometimes they can be dangerous. They are aggressive creatures if they see humans, they try to scare you enough to get you to leave them be. Have you seen an ‘aggressive’ raccoon, pretend to back away a little? If doing this allows it to run away from you. Once it does, clap your hands to remind it that you are a hunter.

Raccoons are found everywhere, there is no specific place where they live. And the interesting facts about raccoons that they are highly adaptable creatures. They can live anywhere and can consume everything. City inhabitants may have noticed that the raccoons which live among them are particularly cunning. That’s because they have to overcome human-made problems. They are very intelligent creatures as in cities they have learned how to avoid cars and intersections and solve challenging problems also.

Like smart animals, they are excellent instructors too. One raccoon learns how to climb a tree with its mother’s assistance. The climbing skill is necessary for their guarantee of survival in dense forests. So, the raccoon mother instructs excellently to its baby all the skills of survival.

While most mammals use vision, sound, or smell to hunt prey, but raccoons dependent upon their sense of touch to discover goodies. Their front claws are amazingly dexterous and contain roughly four times more neural receptors than their back paws. It lets them discriminate between objects without seeing them, which is vital when feeding at night. Interesting facts that Raccoons can improve their sense of touch through something called dousing.

As you know, raccoons are smart creatures as well they have a high level of IQ that is more than cats and just below monkeys. They can open bins by using their paws and lift the lids too. One study exhibited that they can remember solutions to different tasks for up to three years.

Female raccoons’ gestation period is around 63 days. Then they give birth once a year to up to seven kits in early summer. Probably they give birth to kids in a hole of a tree or someone’s loft. They stay for the first couple of months here and then venture outside when they are big enough to survive easily. One of the interesting facts about the female raccoons that she raises her offspring alone.

According to investigators, the average span of life in a wild world of a raccoon is quite short of about two to three years. Wild creatures live shortly due to the potential hazards of hunting and accidents. Though, interesting facts that some raccoons can live in dense forests for up to 10 to 16 years if lucky. The average life span of a raccoon in imprisonment is much greater than the wild world. In captivity, they can live for around 21 years or more due to good care.