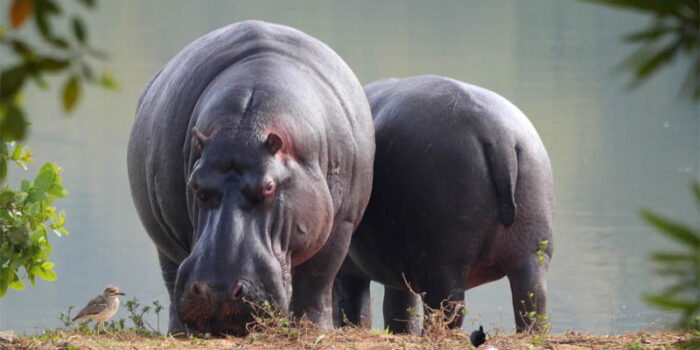 Hippos are gigantic semi-aquatic animals, with a barrel-shaped figure having short legs, a short tail, and a giant head. They found in greyish to muddy-brown skin, which fades to a light pink color below. The term hippopotamus comes from ancient Greek that means “river horse”. Maybe it is due to how they walk on the river bed that resembles like racing horses is why hippos are called river horses remains uncertain. Below are the top 10 interesting facts about Hippopotamus.

Hippopotamus considers as the second-largest land animal on Earth after elephants. Males hippos are around 3.5m long and 1.5m tall and can weigh up to 3,200kg. Hippopotamus spend most of their day in rivers and lakes for staying cool in the blistering African heat. Their eyes, nose, and ears have placed on the uppermost part of their head, which means they can see and breathe while submerged in the water. Plus, these super-cool creatures sweat an oily red liquid which, assists and protects their skin from drying out. This liquid helps them as a sunblock for them. These superb creatures were once found everywhere in all sub-Saharan Africa. Wretchedly, now its populations have declined due to habitation loss and hunting. Now they are just kept to protected areas in East African states.

10: They can Suckle Underwater

Hippopotamus spend most of the daytime in under the water, due to the protection of their sensitive skin. So, their babies have to be able to suckle submerged. Fortunately, they can lock their ears and their nostrils and get food from mama without breathing in water. Baby hippos take breastfeed for around a year.

Hippo lives underwater but interesting facts that they can’t swim in the traditional sense of the word. Somewhat, they push off the bottom of their body and “float” around in the water, even though they are too heavy to float. They also walk along the bottommost in narrower areas of the sea.

Hippos’ conception period is shorter and comprises six to seven months. Naturally, they deliver just one baby but, sometimes twin hippos occur it is incredibly rare. Interesting facts that in 1988, Hippo twins were born on Christmas day at the Memphis Zoo for the first time in the imprisonment of 25 years. The custom is for one calf born at a time, as that’s all a mom has to manage on her own.

One of the interesting facts about Hippopotamus, that they are social animals. They usually like to live in groups, and their herd usually comprises 10 to 20 individuals, led by one large dominant male. Mostly other group members are females, their young once and a few young non-breeding males. Dominant males protect the group from predators. To warn off enemies, they show their huge open mouths in which long, curved teeth are enough to afraid of the predator. They also make loud sounds and violent wallows in the water.

Mostly hippos live in water and just came outside for getting food at night. Interesting facts about the Hippopotamus, that it also sleeps in the water by fully submerging its bodies. They automatically rise to shallow water and breathe without waking up. Or else, they would have had to wake up every 5 minutes to breath, and then go back to sleep for another 5 minutes in the water.

As hippos are herbivores so, they eat just a grassy diet. Their stomach structures have designed for taking natural vegetation so, they can’t digest meat. Even they do not eat any kind of fish or insects either in the water. Interesting facts about that a single hippo can eat around 40 kilograms of food in a day. They graze for around five hours at the night time and covers a land of up to 8 kilometers every night.

Like their gigantic body, they are an aggressive and highly unpredictable creature. It is because they had considered Africa’s most dangerous animals. They are even more hazardous when their young ones are involved. A hippo’s yawn or laugh is a serious threatening signal, and there is nothing cute about it as much as it might seem so. Among all the wild animals in Africa, the hippo has been observed as the most treacherous animal for both humans and other animals. You know hippos kill more than 430 people every year.

Many carnivores creatures including birds eat a hippo’s meat, but very few can kill a hippo on their own. Since a single bite from a hippo can crush a lion as if it is nothing, lions can only chase a hippo in a huge herd. Besides lions, the Speckled Hyena and the Nile crocodiles are the other predators of hippos. Due to the size and aggressiveness, grown-up hippos are seldom preyed on and, hunters only target the young calves occasionally.

02: Why Hippos are important for the environment?

Interesting facts that Hippopotamus helps the environment by fertilizing the water with their dung. You know their dung is full of nutrients that allow the growth of organisms that act as food for fish. On land, they also provide assistance in clearing up the vegetation around the wetlands – which allows the ecosystem to sustain all its members.

An average life period of a hippo is around 40 years. In captivity, it can reach up to 61 years.