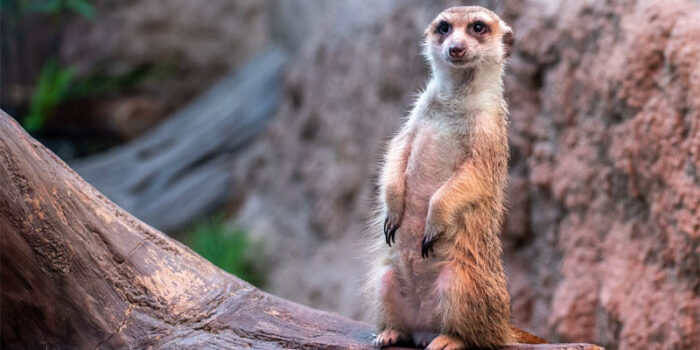 Meerkat is a small mammal that lives in the deserts and grasslands in South Africa, Namibia and southwestern Angola, and the Kalahari Desert in Botswana. They have belonged to the family of mongoose. Meerkat’s scientific name is Suricata suricatta. They look super cute with busy and brown strips on its body. Plus, they have a pointed face and large eyes that make them unique from other creatures. Around, they are 12 inches in height and 2 pounds in weight. Below you can get more excited and interesting facts about meerkats that may be new to you.

Interestingly, Meerkat lives in underground mobs and, everyone participates in gathering food, keeping a lookout for predators, and taking care of the babies. They are highly social creatures that live together in burrows, which they dig with their long, sharp claws. Their burrows can be 5 meters long and encompass multiple entrances, tunnels, and rooms. A group can use up to five distinct burrows at a time. When a colony gets overpopulated, they typically disperse and form another small group to ensure that there will be enough food for all.

Generally, meerkats are omnivores. They eat everything like bugs, floras, fruits, roots, bulbs of plants, scorpions, eggs, reptiles, worms, insects, fungi, and centipedes, etc. Besides, they are safe from the poison or venom of some creatures such as snakes and scorpions.

09: They can discriminate between each other’s voices

Meerkats are Just like humans which, can identify their friends’ and family’s voices over the phone like; meerkats also can distinguish between the calls of different members of their clan, it observed during the research in 2011. In this study, experts played a recording of the same group of meerkat from unseen speakers on opposite sides to test animals. Signifying that they recognized this as an extraordinary situation, the test meerkats presented a prolonged vigilance, paying much closer attention than they did to other recorded calls.

One of the interesting facts, that Meerkats are social workers. Their clans, also known as mobs and gangs, hunt together in a supportive effort that contains nominated members who rotate regularly and keeps a close eye on predators and, all rely on a series of distinct calls to communicate to their compatriots. If a predator like a snake is spotted, the gang started to gather and harass the snake, biting and clawing at it until it ran away or killed. But they can boldly move in a group not, alone.

Another one of the nasty but not too interesting facts about female meerkats that alpha females only have their interests at heart. According to the 2013 study showed that when a gang of meerkats approaches at a road, which represented a strange and potential danger. Alpha females tend to suddenly fall back, letting lower-ranking females brave the pavement first.

06: Meerkats use their Bellies to keep warm

Meerkats use their bellies to keep themselves warm. Interesting facts about meerkats that the hair is thin enough that you can see their black skin underneath—which is precisely the point. After a calming night in the frigid burrow, they climb back out into the desert sun and stand up to expose to their bare bellies to getting rays, which absorb heat and warm them.

Although, they are social creatures and even friendly within their clan. But interesting facts about meerkats that they are highly regional and will engage in ferocious wars with neighboring gangs. They fight in a gang with other posturing and attempting to intimidate the opposition first. If this fails, the fight will be ephemeral but, deadly in this war less, than half all adult meerkats survive any given year.

Meerkats can live up to about 10 to 14 years or more. Interesting facts about meerkats that most of them survive up to their average age. But, many lost their lives in gang wars and, occasionally they suffer from poor vision at a short-range though they have excellent long-range eyesight.

Meerkats excavate safe places that are called bolt holes through their hunting area, where they can hide in an emergency. But if they are caught in the open area by a predator, they will try to look violent, lying on its back and display their sharp teeth and claws. If a group is opposed to a meerkat, they stand together, arching their backs, raising their hair, and hissing. This activity sometimes fools an invader into thinking that they are a single large, brutal creature.

Meerkats have highly advanced senses of smell, vision, and hearing to recognize its predators. Alarming sound or call by other meerkats warn them about the prospective enemy. The semicircular shape of their ears assists in closing the ears while digging burrows to avert sand from getting inside their ears. They can detect as much as ten calls and can even discriminate between the different calls made for prey and killers. Interesting facts that meerkats magnificent eyes are surrounded by inherent sunglasses that glance rays of the scorching sun from their eyes. They have good far sight but, sadly their near-eyesight is poor.