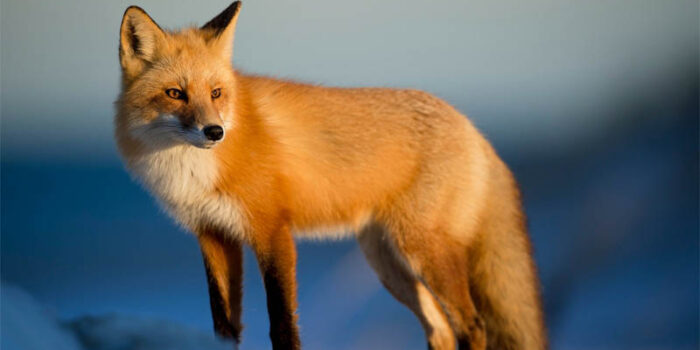 Foxes are the most famous creatures that live in our green and urban zones. Foxes are carnivorous and generally belong to the family of dogs. They resemble more like cats when it comes to hunting. Their eyes are more similar to cats as well. There are around 12 different species, in which the most famous are white Arctic fox, red fox, sand, and fennec fox. Below you will find the top 10 interesting and fun facts about the fox.

The red fox is the most common type and exists almost all around the world. They have also named Vulpes. They have a wide range of habitats including woodland, tundra, savannah, desert, highlands, farmlands, and urban areas too. Foxes prefer mixed vegetation groups, such as edge environments and mixed scrub and forest.

As fox is a part of the Canidae family, they’re interrelated with wolves, jackals, and dogs. They’re medium-sized, between 7-15 pounds, with sharp faces, flexible frames, and shaggy tails. But they are not similar to their relatives, as they are not packed, creatures., They live in small families during raising their kids and, it is called a leash of foxes. Interesting facts that otherwise, single fox hunt and sleep alone and live separately.

Foxes give birth once in a year. They reproduce kids are range from one to 11 pups, which are born blind and don’t open their eyes until nine days after birth. It is one of the interesting facts about the fox that they became good parents. During the period of nourishment, they stay with the vixen in the den while the male fox brings food for them. Foxes live with their parents for seven months. During this time, vixens protect their pups. In England, once a fox pup was caught in a wire trap for two weeks but survived just because of its mother, which brought food for it on daily basis.

Foxes are wild creatures that are also meant to live in the wild. That’s why they don’t make good pets as their place is an only wild life world. But red fox’s case is different, fox interesting facts tell that many kids had adopted by people who can afford, but it’s unlikely that the pups were wild by their mother in the first place. Always respect nature, give them space, and trust in the red foxes’ instinct; they can take good care of their babies.

Foxes are carnivores, that’s why they eat meat most. Interesting facts about that fox eat a variety of small creatures, birds, reptiles, toads, eggs, insects, caterpillars, fish, crabs, mollusks, etc. During winter, they mostly eat mammals, like mice, rabbits, and other small faunas.

05: Breeding season of the fox

Interesting facts about a fox that their breeding season has mostly started from January through March. After a gestation period that is consisted of 51 to 53 days, females give birth to a little once that usually have 2-7 pups. Interestingly, the mother makes a nest of leaves inside her burrow for the protection of her pups. This superior area in the burrow is called a nesting chamber.

Fox uses the earth’s magnetic field for hunting. Other creatures like birds, sharks, and turtles also have a sense of “magnetic field but, the fox is the first one which discovered and used to catch its prey. It counts as one of the interesting facts about the fox.

Among other qualities, Fox has an excellent sense of hearing. One of the interesting facts that a fox can hear low-frequency sounds easily and rodents digging underground.

They are solitary creatures but, they are also known to be friendly and curious too. Foxes like to play among themselves, as well as with other creatures like cats and dogs do. They love to play with balls that they steal from courtyards and golf courses.

Although the fox is a wild animal, interesting facts that its relationship with humans goes way back. In 2011, scientists opened a grave in Jordan to explore the leftovers of a man and his pet fox. Around 4000 years before the first-known human and pet dog were buried together.

During the 17th and 18th centuries, Fox tossing was a popular sport in Europe. Interesting facts that in this sport, people throw fox high into the air using slings with a person on each end to catapult the fox upwards. The King of Poland held that contest as a result, around 647 foxes, 533 hares, 34 badgers, and 21 Wildcats were killed.