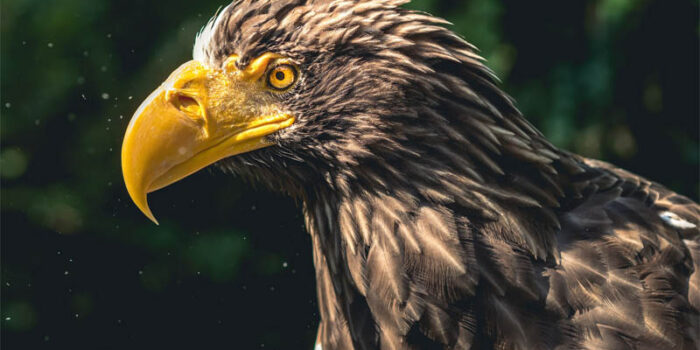 Eagles are known as one of the largest and vigorous birds in the universe. Bald eagles belong to a scientific grouping of eagles known as sea-eagles or fish eagles just because they love to hunt fish. Generally, they are North American birds. They find from the Mexico border through the United States and Canada. They are also abundantly found in Alaska. You can easily find them near coastlines, lakes, rivers because they love water. They are related to the birds of prey in the family Accipitridae; and exist approximately 60 diverse species in the world. Eagles are varying in size. One of the smallest species, the little eagle, is around 45–55 cm. In contrast, Stellers’s sea eagle is about 91–106 cm in size, and wingspan can reach up to 2–2.5 m. Below here you can find more interesting facts and features about the Eagles.

10: Females are larger than males

Generally, in many bird species, females are larger as compared to males. In the same way, the female eagle is also larger than the male. One of the interesting facts that Female eagles can weigh around 25% more than their male mates. Meanwhile, both sexes have the same coloration distinct from other birds and ducks, you can detect a female just from its size. They believe being larger as a female makes it easier for them to provide shelter to their young. Because they spend the most time incubating eggs, though the males do help.

Many times, you have heard the phrase, an “eagle eye”. It is often used to refer to someone with good eyesight. Interesting facts that Bald eagles have exceptional eyesight and, they can see an animal as small as a rabbit from one mile away, amazing! When the bald eagle flies from 1,000 feet high, it can find its prey for 3 square miles.

Besides good eyesight, it can fly high than other birds. Sometimes it’s called the perfect flying machine, you know, bald eagles can stay in flight for hours, taking advantage of wind currents and updrafts. They can fly up to 10,000 feet high at speeds of 65 miles per hour. They can travel for long distances but never nest further than 100 miles from where they were born.

07: Bald eagles have the largest nests

Bald eagles also have the largest nests as compared to other birds’ nests. Both sexes cooperate and build the nest together, and if it serves them well, they’ll renovate it each year. Unlike with humans, nest renovations build their lifelong bond. That’s why they’ll add up to 2 ft of added material to their nest after every year.

Like they live to remain in a nest lifetime they also, choose a lifetime mate at around five-years-of age and only search for another if their mate dies. Once they found a mate, mating mostly takes place in coastal areas and, the female will lay 1-3 eggs in the early winter months. For hatching chicks from eggs, it almost takes a little one month. Baby eagles can fly at the age of three months.

Eagles are apex predators, but what they like to eat it all about species. Whereas Eagles have around 60 diverse species but, it can be divided broadly into four groups; sea eagles, booted eagles, snake eagles, and giant forest eagles. Booted eagles like to take the diet of birds, small mammals, reptiles, rodents, amphibians, and insects, whereas others are more restricted. Sea eagles or fish eagles mostly take a diet of fish whilst, snake eagles to specialize in capturing reptiles. Giant forest eagles like to prey on various forest animals. Interestingly, one of the largest eagles, the Harpy eagle, feeds on huge animals like monkeys, sloths, and coatis.

One of the interesting facts about Eagles that they don’t migrate unnecessarily. Many eagles in Florida do not migrate. Most bald eagles migrate south in the fall to areas just for the sake of sufficient food and return north in the spring to nest. In the spring, eagles migrate quickly; during the fall, they migrate slightly slow, occasionally they remain in an area for a week or so before continuing.

Generally, unlike most creatures, the bald eagles are faithful but solitary animals. Eagles make a mate for a lifetime, but interesting facts about them that they spend winters and migrations alone if necessary.