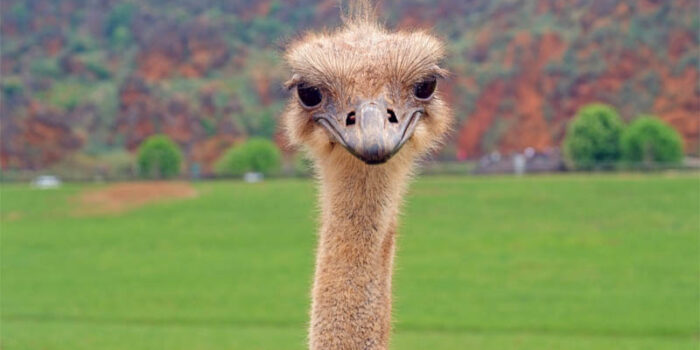 The ostrich is the largest and strongest creatures in the world. It has ancient origins, as it is known as one of the few remaining flightless birds. While many people think about them that it is a stupid or coward creature, they are quite violent fighters when necessary. Furthermore, they have a cunning intelligence that has managed to let them survive and even thrive for ages against some of the fatal predators on the Earth. There are many interesting and fascinating facts about an ostrich, and it is useful for much more than most people know.

10: Ostriches had laid the Largest Egg

Ostrich is one of the largest flightless bird that is living present, and also happen to lay the largest eggs of any living bird in existence today. One of the interesting facts about an ostrich that its name has recorded in the Guinness World Record for the largest egg laid bird in 2008 on a farm in Sweden. You know the weight of an egg was around 5 pounds and 11.36 ounces, which is huge as compared to the eggs we usually eat for breakfast.

Ostriches are herbivores and, they eat the roots, leaves, flowers, and seeds. But they also eat pests, lizards, and other tiny creatures, as well. Generally, they live in the neighborhood of grazing animals such as wildebeest, antelopes, and zebras, and together they form a great partnership. Interestingly, the grazers stir up insects and rodents for the ostriches to eat, and they also help and alert the grazers about dangerous situations such as approaching lions.

If you have an ostrich and you observe them eat glass or other sharp objects, you may be alarmed, but you should not be. If you do not permit your ostrich to eat sharp objects, then it will die. Interesting facts that an Ostrich is an animal that eats food that requires a fair amount of processing, but their stomach cannot do the work alone, because they do not have teeth. So, for digesting the food they have to eat these sharp things. They use a different technique like other ancient creatures like the platypus. The platypus gets gravel in its mouth and uses it to grind up food before swallowing it.

07: Ostrich has two toes on each foot

Interesting facts that an ostrich has just two toes on each foot but, most birds have four, with the nail on the larger, inner toe like a hoof. The outer toe has no nail. The lack of toes is also beneficial for them as they provide aid in running, useful for getting away from predators.

Ostrich is a social bird and it likes to live in a herd. It also provides a defense to them. Fascinatingly, they have long necks and keen vision, which assists them in watching them from great distances. They sometimes gather in a large flock of 100 or more, but most of the flocks are smaller, usually around just ten birds. The group has a leading male and a leading female called the “main hen” and several other females. Sole males come and go during the start of the mating season.

05: Powerful kick of an Ostrich

The ostrich lies on the ground and tries to camouflage itself. However, in some situations when they know its predators are going to attack anyway, and it has no choice except to fight for its life and the lives and future of its eggs or young offspring. For self-defense, an ostrich is certainly not at all helpless. Interesting facts that an ostrich has super long legs that it uses for running have powerful claws too. It can kick out with their legs and do serious damage to anyone who will try to make a meal of them.

As its kick very powerful but an ostrich does not always win a fight against a dangerous predator. But ostriches have been known to kill on attacking different creatures as well as lions with powerful kicks from their sharply clawed feet. They have also been known on a handful of occasions to kill a human when threatened.

One of the interesting facts and features of an ostrich is its fascinating and big eyes, measuring up to 5cm around. These assists them to perceive predators at a great distance. Plus, the heavy eyelashes assist and a shield for them from the sun.

An ostrich is also known for the fastest speed among land creatures. It can reach a speed of 70kmh. Interestingly, it is not only the fastest land bird’s speed but also the fastest of any two-legged creature. During running at full tilt, the ostrich takes strides of up to 5m.

02: Ostrich can live without drinking for several days

Ostriches can live easily without drinking for several days. Because it is using metabolic water and moisture in ingested roots, seeds, and insects. Additionally, it also enjoys liquid water and frequently takes bath whenever it gets water.

01: Behavior of an ostrich

You know an ostrich is the most energetic bird in the world. One of the interesting facts about an ostrich that, they roam the African savannah in herds ranging up to 5 to 50. The male is territorial and mostly aggressively defends its territory. If they find any threat, an ostrich either runs or lies low and presses its neck to the ground to make itself less visible to predators. This technique serves as a form of camouflage to them, and its feathers also blend well with the soil colors. An ostrich also fluffs its wings and hiss loudly to scare enemies. When attacked, it gives a powerful kick with its strong legs that gives a serious injury to its enemy.