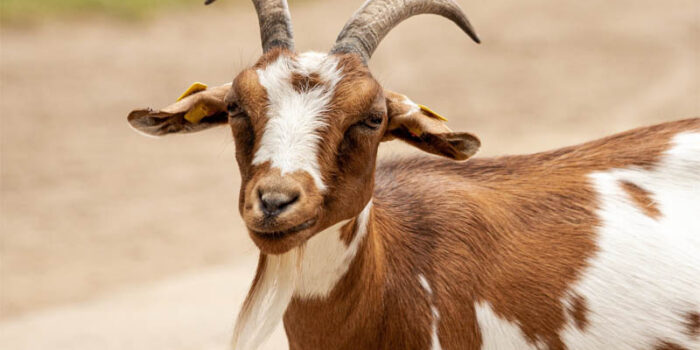 Goats are unusual creatures of God and, they often grouped in with sheep, camel, and other white and wooly grass-munchers. They have been used as a part of our domestic and farming lives for longer than we can remember. You know goats don’t graze on grass. It is a good idea to clean up the grass of your beautiful lawn by the goat and, it will consume all the shrubs. Because they are browsers and, they prefer to eat fruits, shoots, plants, and shrubs. Here’s you can find ten interesting facts about goats that will increase your knowledge about this unusual creature.

Goats have around 200 breeds of pets but vary in size research by the Smithsonian Institution. The Nigerian dwarf goat is known as one of the smallest breeds of goat, that weighs around 20 lbs. Another breed of goats like Pygmy goats that weigh from 53 to 86 lbs. and the Anglo-Nubian goat weighs up to 250 lbs.

One of the breeds of the goat is mountain goats that find in the Rocky Mountains, typically in Alaska, western Montana, central Idaho, South Dakota, Colorado, and Washington. Its wide and huge hooves let them climb on steep mountainsides with ease. They usually live in heights of 3,281 to 16,404 feet above sea level. Others breed is domestic goats that are raised all over the world and every type of terrestrial biomes. According to the ADW, these types of goats required grass to eat and a clean, ventilated shelter.

It is one of the interesting goat facts that they are intelligent and naughty creatures. They can figure out how to escape from many enclosures. You know the goats are much similar to dogs in that they can learn certain words easily. It has verified that a goat can learn its name and will come when you call it by name. Try it with your domestic goat!

Goats are social animals and live in groups called herds. A herd may have as many as 20 goats in the wild. One of the interesting facts that Mountain goat is mainly social as in winters, it tends to go solo in the summer. In herds, there is a dominant female goat throughout the year, until the mating season started. During the mating period, a male control, the herd. Males only live with a few other males or by themselves, year-round.

07: Almost all goats have horns

The majority of goats have horns and, there is no difference between sex discrimination goats also do not shed their horns like an elk or deer. Goat interesting facts that their horns act as radiators and help them to stay cool in the hot summer months. Their horns are occupied partially with blood and nerves and, most goats love to have their horns injured.

Goats are herbivores, and they eat only natural vegetation. The favorite food is grass; however, mountain goats also like to eat mosses and plants. May you have seen that the majority of domestic goats eat trash, house plants, or any other items they find lying around as well. Another one of the interesting facts that goats are ruminants, and like other cattle, they have four stomach compartments. The rumen can hold 4-6 gallons, the reticulum portion can hold up to 0.26 to 0.5 gallons, the omasum can hold up to 0.26 gallons and, the abomasum can hold up to 1 gallon. Goat’s digestive system is unique and just takes 11-15 hours for food to pass through by it.

Goat milk is another one of the interesting facts about goats. Because its milk has smaller fat molecules and is much easier to digest than cow’s milk. Interestingly, it is best for digestion because it rarely contains more fat than cow’s milk. Slightly, the butterfat content has to do with the breed of goat, their specific genetic makeup, a period of lactation, and their diet.

You know a goat was responsible for discovering coffee. Interesting facts that an Ethiopian goat herder found his goats demonstrating energetic and active behavior after browsing from a specific bush. The person used it and felt the same inspiring result and, that’s how coffee was discovered.

Female goats are called nannies or does when they give birth to one or two offspring in the spring after a gestation period. Their offspring calls as kids. After the birth of a new kid within minutes, it stands up and walks around the mother. Interesting facts about the goat that after three to four months the kids became matures and, at 30 months they are ready to have kids of their own.

Out of the goat interesting facts, tells that it can be surprising for you that your pet goat is a good swimmer. Yeah, they are excellent swimmers by birth. They can swim by birth can be traced back to their ancestors, who lived in the wild. For goats, swimming was an essential skill that was needed to survive in the harsh geographical environments where they lived. It is because they had to swim for seeking food and migration in wildlife.