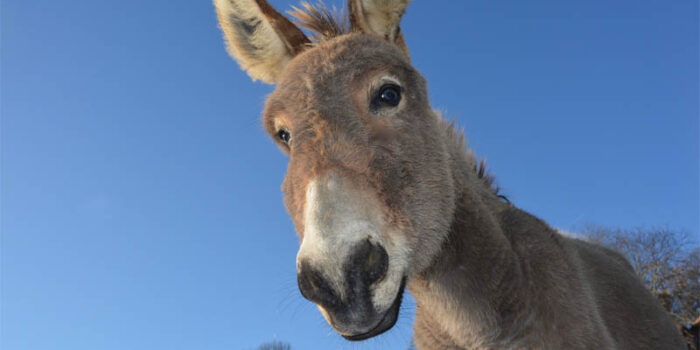 A donkey is a hoofed mammal that is related to the family of Equidae. Horses and Zebras are also part of the same family. Sometimes donkey calls as an ass or a burro. Burro is the Spanish word that has been used for the donkey. They are smaller animals as compared to horses. But the size and color are dependent upon the species of a donkey. They find in the range of 3.5 ft 5 ft tall and can weigh between 180-1,00 pounds. Donkeys have a variety of colors like grays and browns and, white donkey finds rare. They exist all around the world. It considers as foolish animals and, many jokes had made on it. But there are the top 10 interesting donkey facts which should know and respect this incredible animal.

Donkeys have originated in North Africa around 5,000 years ago. This creature prefers a warm, dry environment like the desert. The Egyptians used donkeys for taking work from this strongest animal. Donkeys were domesticated and have been transported all around the world for thousands of years ago. Even now, many states’ donkeys are still used to till fields, transport people and goods. They are mostly used to pull carts and other items from one place to another.

There are three different classes of donkeys that have based upon their height measured at the shoulder level. Miniature donkey is the smallest class of donkeys. The height of this smallest breed in past was just 36 inches. The other classes of donkeys are the Standard breed which, measures up to 36-54 inches and, another one is the Mammoth breed that measures more than 54 inches. They also use as guard livestock against coyotes and wolves. It is due to their instant attack, and by instinct, they bite and kick the enemy.

One of the interesting facts that now in developed countries, it is trending that they keep donkey as pets or breeding. But in under developing countries, they are still using for draught, pulling loads, and protecting the livestock.

It is hard to estimate the size of donkeys and their body size and weight. They are influenced by the management and breed of donkeys. Approximately the average weighs of donkeys is 180-1,060 lb. Their height should be around 79-160 centimeters.

The average life expectancy of the donkey is only 12 to 15 years if they live in underdeveloped countries according to living conditions. But you know it also includes interesting donkey facts that they can live up to 30 to 50 years if they have raised in a healthy environment.

Do you know donkey is a social animal? Donkeys don’t like being kept on their own although, a single donkey will live rather happily with goats or other donkeys. One of the interesting facts that the donkey is a herd animal and, a herd choose the strongest donkey for leadership, even if domesticated. In the wild world, the leader donkey protects the herd from the attack by a wolf or other predators and keep the herd saves. A herd leader always seems like a leader in face of risk. The leader always stays and faces the danger letting enough time for the rest of the herd to escape make them save.

Donkey is an herbivore. Herbivores are those animals that eat only grass and natural vegetation and don’t eat meat. So, the donkey’s main diet is grass, hay, and grains.

God has bestowed a very special and very efficient digestive system that can break down even the most indigestible vegetation also. One of the interesting facts about a donkey that just not the only breakdown of the vegetation but also they can even extract moisture very efficiently out of those plants. Later on, they use the moisture to keep themselves hydrated in dehydrated days.

It can be surprising for you that donkeys have consisted of those animals which utilize their 95% of an entire meal. It has included interesting facts that donkey can do it because basically, it is a desert animal. So, in a desert where food is scarce so, they utilize the meal in hydrated days and fulfill their need.

One of the interesting facts about a donkey is capable of hearing another donkey from a distance of 60 miles in proper desert conditions. It is possible because of their large ears and excellent hearing ability.

Besides excellent hearing, this normal creature has an excellent memory as well. Mostly we take the donkey as a foolish and incapable animal but it is not true. You know, they can remember another donkey or a place even if they visited around 25 years ago. Amazing!

We are usually annoyed by the strange behavior of donkey. But you have ever thought that why they do it. One of the interesting facts that if any donkey feels something wrong in traveling, they will simply not move ahead and will start digging in their heels. It is because they have understood the danger before. So, people sometimes think that they are stubborn creatures, but it is not true.