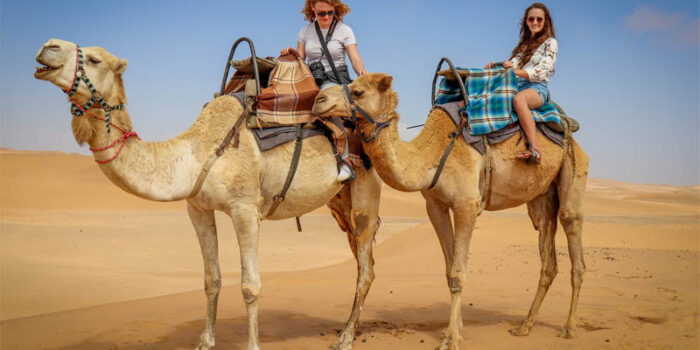 Camels exist in the deserts of Asia and Africa. They have tamed for thousands of years ago and have been used for a means of transportation ever since. Camel has mainly two species one is the Dromedary and the second is the Bactrian camel. The Dromedary camel is found in the Middle East that is known as the Arabian camel. They have just a single hump on the back. But the Bactrian camels have two humps on their back and, they have found in parts of central Asia. The Dromedary camels are not as harmful as they have trained. Only species of camels were found in the wild world that known as Wild Bactrian camels. Australia has a feral camels’ population that are descended from domesticated ancestors. Around 80% of camels in the Indian desert exist in Rajasthan. There are many more interesting facts about camels that will increase your knowledge.

You know the word ‘camel’ has derived from an Arabic word, which means beauty. No doubt, camels are an attractive creature of God. The oldest camel is Protylopus, which appeared around 40-50 million years ago in North America. Interesting facts about a camel that it was just the size of a rabbit and lived in forests. Later on, camels spread to the Savanna and, their size has also increased.

10: They store fat in humps

Camels possess either one or two humps that have been located on their backs according to species. These humps work as storing fats that the camels utilize for nourishment during the famine. During a lack of food for a long time, the camel body activates to metabolize the fat into a form that can use for nutrition purposes. As camel use this fat, the hump deflates and droops until it restocks with more fat.

09: Camel milk is among the healthiest milk in the world

It is one of the interesting facts about a camel that its milk considers as one of the healthiest milk in the world. As it is low in fat and saturated fat compared to cow milk. It also has enough amounts of iron and vitamin C. Nutritionists state that camel’s milk can improve an immune system of a person, it stimulates blood circulation, prevents diabetes, and improves the health of the heart as well.

08: Camels are relatively fast in their movement

07: They can go for weeks without drinking water

Another one of the interesting facts about Camel is its furry ears. Camel’s ears have hair that keeps the sand and dust away from their ears. Interestingly, their nostrils also play an important part in preventing the sand from entering by closing in between two breaths.

Camel considers huge animals; they have long legs with broad feet that uniformly distribute their weight over the sand and stop them from sinking into it. Amazingly, each foot has two toes with thick paddy bottoms that spread out when they put their feet on the ground. The long legs also assist to keep their body a good distance above the scorching desert sand.

Camels have remarkable eyesight that lets them recognize the danger from around 3-4 km away. One of the interesting facts about a camel that they have sharp canines that are used in biting during the fight. Male camels can get intense during the fight.

The average age of camel is 40 to 50 years. The female camels reach reproductive maturity within 2 or 3 years but do not give birth until the age of 5. Interesting facts that a female camel just gives birth to one calf once after 2-3 years. The baby calves then feed on the mother’s milk for around a year.

Camels are lived in deserts and are well adapted to their environments. They can carry heavy loads, stand in sand storms, and even in intense temperatures. Camels are known as the “desert ships” and, they can swim when they encounter water. The depth of north Egyptian Lake Borollos has varied between 20 cm and 2 m. It cannot be crossed by boat or vehicles, and specifically, camels have been used in this case.

Camels mate all year round, but the suitable period is when vegetation has lushed. During the mating period, males remain extremely aggressive they can also bite by the foot of the rider. During the arousal, he shows off his teeth, salivate abundantly, and the epidermic glands of the neck and shoulders are tremendously active. Frequently it urinates and keeps the head and the forelimbs raised whenever possible.