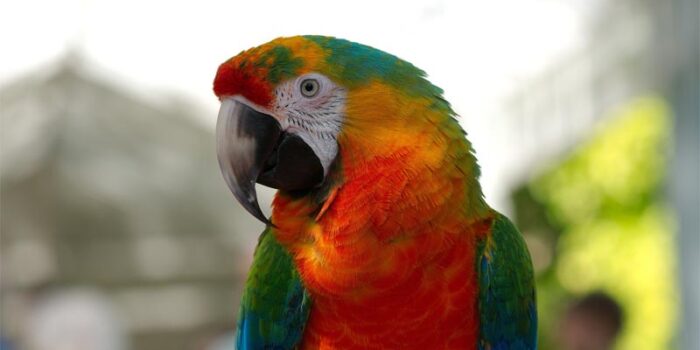 Parrots are known as the most popular and favorite birds around the world due to their appearance. Numerous Egyptian hieroglyphics are dating back to 4000 years, which show that royal families were the first people who kept parrots as pets. In the past, parrots had been domesticated during the Greek and Roman times. Winston Churchill and King Henry VIII’s famous personalities also owned parrots. Parrots are also shy creatures like African Grey parrots usually bond only with their owners. There are other many parrots like a Quaker Parrot will gladly socialize with everyone in your family, and possibly with strangers also. Parrots, consider the most intelligent birds and, it is not a usual thing for an African Grey Parrot to learn up to 100 words and phrases. There are many more interesting facts about parrots you should know before keeping them a pet.

Parrots have a lot of different types most of them have found in tropical and subtropical surroundings. Generally, there are three different families of parrots, the Psittacoidea, which are known as true parrots. Next to the Cacatuoidea, which are cockatoos, and Strigopoidea, which exists in New Zealand.

Males and female species of parrot’s species look virtually identical. For identification, it takes a keen eye and usually does a lab test to identify whether it’s a boy bird from a girl bird. But some species of parrots, like the Solomon Island Eclectus, look differently. Male parrots mostly have bright emerald green with flame-colored beaks, while females top off their crimson and royal blue bands with black beak and a bright scarlet head.

A parrot’s dazzling plumage has a special defense system against any sort of damage. One of the interesting facts that Psittacofulvins is a bacteria-resistant pigment that just parrots know how to produce also gives the birds’ feathers their red, yellow, and green coloration. Researchers exposed different colors of feathers to a feather-damaging bacteria strain have found that the pigments helped save the glorious plumage from degradation, according to the study in Biology Letters.

Most parrots have kept as a pet in homes. They mostly remain in one place. But you know some species of parrots also migrate like the swift parrot and the orange-bellied parrot. They are migratory parrots and, each year they cross the Bass Strait between Australia and Tasmania. Besides interesting facts, the migration factor is dangerous for these species of parrots.

07: Most Parrots Can Reproduce Sound

Mostly Parrots can imitate sound so that they can fit in with their surroundings. As social birds, they don’t like to feel like they’re missing out so they mimic sounds that they hear around them to communicate. one of the interesting facts about parrots that they don’t have vocal cords as humans have they use the muscles in their throats to direct the air differently, which lets them mimic sounds such as a ringing phone, creaking door, or making the voice of different animals.

As you know that many species of parrot can handle around 2,000 human words, though they don’t necessarily use them in the right order in daily life. Thus, suggesting parrots might have a greater understanding of the world around them than we would expect. Interestingly, an African Grey parrot called Alex, for instance, can discriminate between different objects by their shape and could repeat at least 100 words. Another one of the interesting facts about parrots is if you take a parrot that’s been taught to talk in captivity and release it into the wild, other parrots will be able to learn from it.

05: The life expectancy of parrots

You know birds can live longer lives but, mostly parrots can live for over 50 years. One of the oldest recorded parrot’s ages was 83 when it finally passed away. Its name was Cookie and born in 1933. So, before buying a parrot for keeping as a pet it is an important thing to remember. It’s not something that you can keep it for a few years and then decide to leave it. You should also know how to look after your parrot well by feeding it properly, creating the right habitat, and giving it lots of time and attention. Because parrots are social creatures, they don’t like to live lonely. So, if you are a person who spends most of your time outside so, parrots are not suitable as a pet.

Parrots are domesticated creatures they can be trained to demonstrate specific behaviors, but wild parrots know a thing or two as well. For example, a Kea parrot, love nesting at the base of trees in New Zealand. It is also including in interesting facts that parrots are very smart creatures they use basic push and pull techniques when they want to access food, they also know how to use tools to get food, for example, picking up pebbles to crack cockles on the beach.

The Kakapo is a nocturnal and flightless parrot that has around 7 pounds weight it considers as the heaviest parrot out of all 250 species.
Due to its heavyweight and large size, it considers as the rarest parrots as well. In the whole world, there is only a shocking number of 126 known to be alive. With gratitude, though, maintenance efforts have placed these majestic birds on three different predator-free islands where they can hopefully breed and start thriving again.

Parrots have categorized as omnivores which, means that they can eat both meat and vegetation. Their diet has consisted of seeds, fruit, the nectar of flowers, pollen, buds, and sometimes arthropods and other animal’s prey. Interesting facts that seeds are their favorite food; as they have strong jaws to help the bird crack open hard nuts and seeds. It is no doubt very amazing to see a bird while cracking seeds and nuts.

One of the interesting facts that during the incubation period of parrots that lasts between 18-30 days. Both parents take turns sitting on the eggs during this period. A third week they begin to develop their feathers but, they don’t reach maturity until they’re between 1-4 years old and, it is dependent upon species.