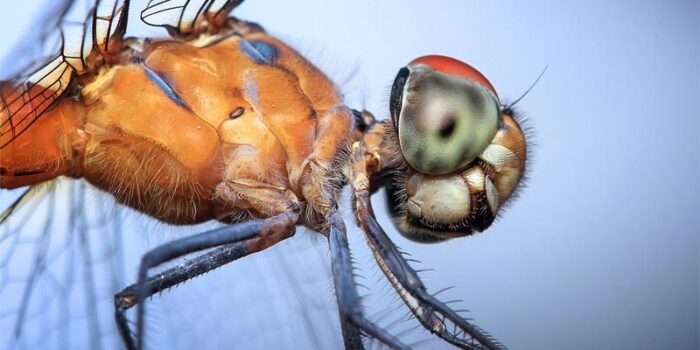 Dragonflies were the first flying insects that had existed around 300 million years ago. Now current dragonflies’ wingspans are only two to five inches, but fossil dragonflies had wingspans of up to two feet. They exist in every continent except Antarctica, because they live in moderate, hot, and terrestrial sites. They mostly start their life in water. There are more than 5,000 species are existing on this planet. They have belonged to the order of Odonata, which means “toothed one” in Greek. There are many more interesting facts about dragonflies.

It has been estimated that dragonflies are older than dinosaurs. In Japanese culture, these are the symbol of courage, strength, and happiness. According to European folklore, they’re sinister.

10: Dragonfly Nymphs Live in the Water

Have you observed that dragonflies are always around ponds and lakes? They’re aquatic creatures. Mostly they start their life on the water that’s why female dragonflies deposit their eggs on the surface of the water. Sometimes they insert these eggs into aquatic plants or moss. Once their eggs hatched, the nymph dragonfly spends its time hunting other aquatic invertebrates.

One of the interesting facts about dragonflies is that compared to other insects, they have remarkable keen vision that helps them detect the movement of other flying critters and avoid in-flight smashes. They have two huge compound eyes, which provides dragonfly with nearly 360° vision and can see a wider range of colors than human beings. You know it’s every complex eye that has 28,000 lenses or ommatidia and, a dragonfly uses about 80% of its brain to process all of the visual information which it receives.

Dragonflies are known as master flyers which can move its all wings independently. Interesting facts that dragonflies can flap each wing up and down, and rotate their wings frontward and backward on any axis easily. They can change their direction to straight up or downward, it can fly backward, stop and float, easily at a slow or fast speed. Additionally, they can fly ahead at a speed of 100 per second.

Besides their fastest speed, several species have acknowledged migrating either alone or in a group. Like other migratory creatures, dragonflies move to follow or discover required resources or in response to ecological changes such as approaching cold weather. Green darners fly to the south in each falling season in huge groups and then migrate north again in the spring season. Rainy season helps in replenishing their breeding sites, the globe skimmer—one of several species that’s known to spawn in temporary freshwater pools. Interestingly, they set a new insect world record while tripping between India and Africa.

It has been estimated that the life span of dragonflies comprises two stages. Female dragonflies lay their eggs on water or nearby. Their lifestyle begins with the hatched eggs in the first stage. During this stage, aquatic larvae are called a nymph. One of the interesting facts is that dragonflies’ stage will generally last between one and three years.

The main predators of dragonflies are pest-consuming birds, toads, giant spiders, and different species of fish. Adult dragonflies use their quickness to escape from predators who are pursuing them and will also hide in vegetation if it is too cold for them to fly.

One of the interesting facts that dragonflies have huge stingers. And some people have allergic to its sting and can die because of it.

03: Fastest insect in the world

These are known as the fastest flying insects in the world. They can reach high flying speeds of over 48 kilometers per hour.

Dragonflies had consumed in Japan and China as a medicine. Even Indonesian take it into their diet.

Competition for females is fierce, leading male dragonflies to aggressively fend off other suitors. In some classes, males claim and protect a region against interference from other males. Skimmers, club tails, and petal tails scout out prime egg-laying areas around ponds. A challenger should fly into his preferred environment for the defend the male will do all he can to chase away the match. Other kinds of dragonflies don’t defend particular regions but still act aggressively toward other males that cross their flight paths or dare to meet their perches.