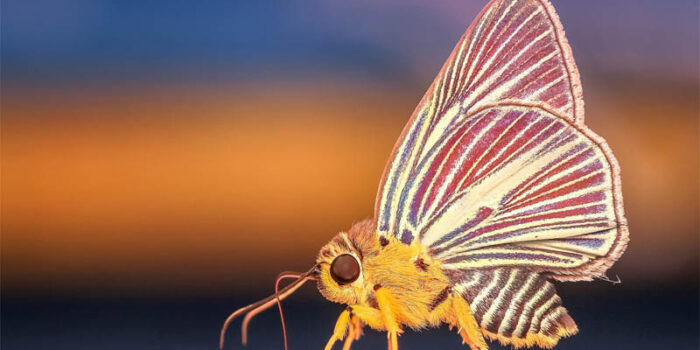 Butterflies are insects that are related to the order Lepidoptera, which also includes moths. Butterflies and moths are flying creatures with large, often brightly colored scaly wings. Like all insects, they also have six jointed legs and three body parts like the head, thorax, and the abdomen. The wings are linked to the thorax plus, they also have a couple of antennae, multiple eyes, and an exoskeleton. There are a lot of interesting facts and features of colorful and attractive butterflies.

10: Butterflies Live on an All-Liquid Diet

When we talk about the diet of butterflies, adult butterflies just take feed from liquids—usually nectar. Their mouthparts are adjusted to take liquid items because they can’t chew solid items. A proboscis is a function in butterflies like a straw that assists them in drinking, stays curled up under the butterfly’s chin until it finds a source of nectar or another liquid diet. The long, tube-shaped structure then expands and sips up a meal. Interesting facts that a few species of butterflies get to feed on sap also and some even resort to sipping from carrion.

Many pests are harmful to humans as they destroy crops. However, butterflies’ interesting facts tell that these provide benefits to people and the ecosystem. Few butterflies may consume harmful pests and, some of them can act as agents of pollination.

09: They eat poop and tears of other creatures

As you know, Butterflies don’t just drink nectar from flowers and also get a liquid diet. Not interesting but weird facts about many of butterflies that they consume a whole host of revolting things, from poop to urine to decaying animal’s flesh. They also even drink the tears of reptiles for getting sodium.

Once some researchers tried to attract the butterflies they spit on a piece of tissue and put it on the ground, a method known as the Ahrenholz technique. Butterflies are attracted to the saliva-soaked tissue because it resembles like bird’s poop, and they stick around it because they get sodium and other nutrients from it. Meanwhile, their presence allowed the researchers to get a photograph and collect them.

Read More: 10 of The World Most Beautiful Moths

Have you seen a butterfly closely? If you have seen it then you must notice that wings are transparent. Mostly butterflies are colorful, and their wings are covered by thousands of tiny scales, and these scales reflect light in different colors. But beneath all of those scales, butterflies’ wings are formed by layers of chitin—the same protein that makes up an insect’s exoskeleton. If you will look closely then you will see that these layers are so thin that you can see right through them. Gradually with ages, its scales fall off the wings, leaving spots of transparency where the chitin layer is exposed.

Butterflies are interesting and attractive creatures of God, besides other facts, it is one of them that it can just live up to three to four weeks. Though, the whole life cycle of a butterfly lies between 2-8 months, as depends upon the species as well. Some migratory butterflies, such as the North American Monarch, can live a long period like 7-8 months in one generation.

The Giant Swallowtail butterfly is one of the biggest butterflies in the world. Its wing has spread to four to seven inches approximately. The female butterfly is generally bigger than the male. This type of butterfly finds throughout Northern America and sometimes as far southern America too. One of the interesting facts that these butterflies are called “swallow” because they have long tails on their hind wings that resemble a lot the long, sharptails of the birds known as swallows.

One of the interesting facts about butterflies that many species develop a parasitic relationship with other organisms such as ants, flies, vertebrates, invertebrates, and protozoans.

One of the species of the butterflies is known as the monarch butterflies that are native to America. Now you can find them living in the Iberian Peninsula, Oceania, New Zealand, and Australia, and other countries also.

02: They employ tricks to escape

Butterflies look attractive and low in the food chain as with lots of hungry predators happy to make a meal of them. So, they need some defense mechanisms to escape. Some butterflies can camouflage in the environment as they fold their wings to blend into the background. Others try the opposite strategy they wearing vibrant colors and patterns that boldly announce their presence. Bright colored insects often pack a toxic punch if eaten, so predators should learn to evade them.

Within about 10–12 feet, a butterfly can see everything. But anything beyond that distance gets a little blurry, though. Interesting facts that butterflies can see not just some of the colors that we can see, but also a range of ultraviolet colors that are invisible to the human eye also. The butterflies themselves may even have ultraviolet markings on their wings to help them recognize one another and locate potential mates. Flowers also have ultraviolet markings that act as traffic signals for them.