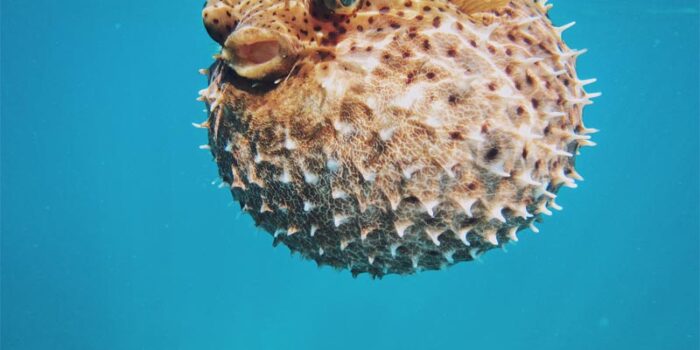 Sea creatures and fish are often the victims of negative publicity in wildlife channels. Many of the documentaries had based upon the names such as “Killer Squid” and “The Deadliest Octopus.” No wonder aquatic creatures are very frightening but look beautiful too. Not all but some of the fish and sea creatures are very dangerous so we should keep them away for safety purposes. Almost all aquatic life harms human beings due to defensive behavior on the part of the animal. As long as you don’t try to drag eels out of their holes, push the lobsters, or try to drive on the stingrays, you should be just fine. Don’t bother the aquatic life, and some they won’t bother you. Here we have compiled a list of 10 dangerous fish and sea creatures worldwide.

The Red Lionfish is well-known due to its toxic fin spines, which can give you rarely fatal puncture wounds. These types of fish have large pectoral fins and extended dorsal fin spines, and each species bears a special type of bold, zebra-like stripes. When you disturb the fish, it can spread their fins and attack you. It is one of the most famous dangerous species of fish and sea creatures. It is also native to the South Pacific Reef ecological unit. Red lionfish can camouflage when anyone wants to capture them. Its sting can be painful for humans and can be fatal. Due to this, they can suffer from nausea and breathing problems.

Moray eel is one of the 200 separate species of fish but, it is a dangerous one that can cause serious injuries. They can reach up to 3m in length and weigh up to 30kg. They have three rows of sharp teeth and a set of two powerful jaws. Almost all fish have two sets of jaws but, the moray eel is the one that can shoot these second jaws forward to pull its victim downward its throat. Eels are particularly aggressive; they are quite shy and but they don’t like disturbance when they are hiding away in their burrows. During an attack, as a result, their bite can be more severe. They have numerous thumbs and fingers which can injure you very badly. Once the moray eel clamps down on a victim, it is very hard to get rid of even in death.

Pufferfish is the second most poisonous creature and dangerous fish on earth. It contains the toxin tetrodotoxin (TTX) which, is found in the blue-ringed octopus also. The symptoms of pufferfish poisoning usually start with a tingling of the lips, followed by faintness and vomiting. After this, you can quickly go downward with shock and muscle paralysis setting in. in this condition victim cannot breathe lead to death within a few hours. There is no antidote available up till now. Of course, this doesn’t stop people’s consumption of pufferfish. Japanese people pay large sums of money for the license. After removing all traces of the liver and internal organs, you can eat it is safe for you.

Tiger Fish is one of the most dangerous fish and sea creatures in the world. It has razor-like sharp teeth and the ability of a true fighter and seeker. This fish exists in the Congo River and Lake Tanganyika, in Africa. It attacks in groups and hunts the large creatures.

The Stonefish is not just a dangerous fish, but also one of the dangerous creatures. Stonefish is like the surface of a stone and could not be identified unless you have stepped on it. Stonefish is also a toxic creature on the living earth. Its sting is incurable and, the victim has to suffer it for many hours. There is a slight divergence in the faith whether it kills or not. However, some people believe that it’s only the pain while others argue that its poison can destroy within two hours.

The Snakehead fish has exited in China, Russia, and Korea. It found in other countries and their ecosystems also. Once it finds its way to another lake or water body, it quickly consumes all the living creatures. It is too dangerous that after ‘cleaning’ the water from living beings, it comes out to the land and eats whatever comes in its way until it reaches another water reservoir.

The white shark is also called a great white shark or white pointer. I think everyone knows it needs no introduction to it. It is a powerful and potentially dangerous creature and fish in the world. Many novels have been also written on it. According to the fossil record, the modern species has been around since roughly 18–12 million years ago. During the middle of the Miocene Epoch, but its associates may date back to the Eocene Epoch about 56–34 million years ago.

A jellyfish sting can injure a scuba diver too, it seems awkward but, it is true. However, jellyfish stings are rare because they don’t attack. The risk with jellyfish is that they transparent testicles that are hard to spot, so a diver may accidentally swim into them. Before diving, a diver should get the knowledge about it from the local divers to learn about hazards such as jellyfish. You can avoid its sting by wearing a full wetsuit or dive skin to prevent inadvertent contact with the tentacles.

Sea urchins are spiny, globular dangerous sea creatures. There are around 950 species that live on the seabed, inhabiting all oceans and depth zones from the intertidal to 5,000 meters. Their hard shells are round and thorny, usually from 3-10 cm long. They move slowly, crawling with their tube feet and occasionally pushing themselves through their spines. Sea urchin spines are sharp and fragile and easily penetrate in a wetsuit, and dangerous for a diver’s skin. Additionally, certain species of sea urchins protect themselves by injecting the painful toxin into creatures that touch or attack them.

Payara is also famous as the most dangerous ‘vampire fish’ and sea creatures. It can grow up to 4 feet which, can be hunting other nearby fish like its own size. It has sharp teeth and two front outer tusks, through it kill anyone easily.