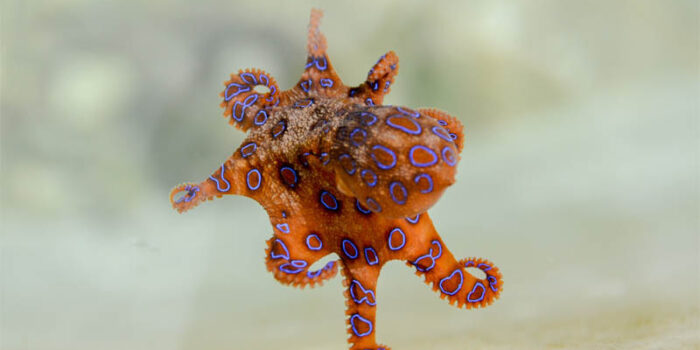 An Octopus belongs to the family of cephalopods which, is famous for their intelligence, their mysterious ability to blend into their surroundings, their unique style of movement, and their ability to squirt ink. It considers as one of the most attractive creatures in the sea. Octopus exists in almost every ocean in the world and every continent’s shoreline waters. There are many more interesting facts and features of an octopus that will make you amaze.

There are about 300 species of an octopus and found in every ocean. Most of them live at the bottom of the sea, but some like the paper nautilus live near to the surface of the sea. They are solitary creatures and typically live alone, sometimes in holes which they build from rocks, sometimes in shells for protection.

An Octopus is a carnivore, and the adults get a feed from small fish, crabs, clams, snails, and even other octopuses. Typically, they search food alone and mostly at night, pouncing on their prey and wrapping it in the webbing between their arms. Some octopuses use different levels of toxic techniques some octopus injects their sharp beaks into the prey; they can also use their beaks to penetrate and crack hard shells. The majority of them are night hunters, and they spend some of their daylight time in holes, generally shell beds or another substrate, vertical shafts sometimes with multiple openings. An Octopus’ hole is engineered by a single octopus, but they can be reused by later generations and some species are co-occupied by male and female for a few hours amazing like human houses.

One of the interesting and strange behaviors of an octopus is that it eats its arms when bored. They also became stressed if you compare them with other octopuses living in tanks full of fascinating decors like shells and flowerpots, octopuses living in more spartan conditions become pretty stressed out. Some of them even turn into disturbing behavior known as autophagy, in which their appendages, in such non-stimulating environments.

08: They use tools for making homes

Octopus uses different tools to make a shelter for them like other creatures. Octopus’ interesting facts tell that they are one of the intelligent creatures and have observed while using tools. Some scientists reported in 2009 that they had watched veined octopuses that were picking up discarded coconut shells and using them as mobile homes.

07: Octopus arms have their minds as well

First, they have actual arms and not tentacles. One of the interesting facts about an octopus is that its arm has two-thirds of neurons. Due to these neurons, they can continue to demonstrate a high level of awareness. Furthermore, their “brainy” arms or whatever you want to call them to make them great at multitasking. It means if octopus were a person so he can do some office job or another task at the same time.

Most creatures have red blood but, an octopus is different from them. Interesting facts that octopus is a blue-blooded creature, which is awesome and probably makes them unique. Red blood is iron-based which, is an essential component for living beings. But you know blue blood is copper-based, which is a more efficient mineral for transporting oxygen in a cold, low-oxygen environment.

One of the best abilities of octopus is camouflage, in which they change their color according to the surrounding. Interesting facts about an octopus that among all the ocean predators, octopuses are some of the hardest prey to spot. They can change skin color and pattern and blend in with their surroundings, so no one can easily detect them.

04: Their limbs are unique

As you know, the Octopuses don’t have tentacles; let’s get that out of the way first. Those long, dexterous appendages featured in a popular type of adult anime are creatively called arms. Other sea creatures like Squid and cuttlefish each have two tentacles along with their eight arms. While octopuses generally have eight arms and no tentacles. However, tentacles resemble arms, they only have a few suckers at the tip, while an arm has suckers running down its whole length. Interesting facts that each octopus arm has 200 to 300 suckers, and every individual sucker can work independently of the rest, or they can work as a team to observe and even smell and taste the encircling ecosystem.

As we know, every creature got just one heart. But it is one of the interesting facts about an octopus that got three hearts. Two of the hearts work wholly to supply blood beyond the animal’s gills. While the third heart keeps circulation flowing for the other organs of the body. Interestingly, the octopus’ organ heart stops beating when it swims, explaining the species’ penchant for crawling rather than swimming.

Like many other animals’ octopus also like to play. A scientist cited in “Octopus” which tells about a story of an octopus that was pushing a plastic bottle over and over again at a stream of water flowing into its tank. It seems like bouncing a ball underwater.

Octopus has a short span of life, around 1-3 years, and they dedicate their lives to raising the next generation. Mating happens when the male approaches the female. Interesting facts about an octopus that its one of arms, typically the third right arm, has a particular tip that called a hectocotylus. They use it to transfer sperm to the female’s oviduct. You know, an octopus can fertilize many females and many females can be fertilized by more than one male octopus.