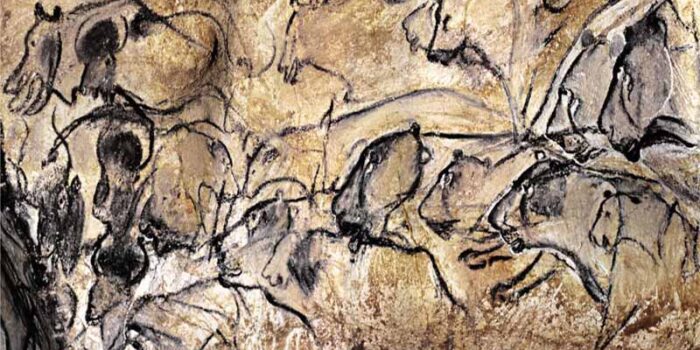 Cave painting includes the kind of “parietal art” that found on the cave’s walls and ceiling. There are almost five kinds of cave paintings in the world like figurative, abstract, finger or hand marks painting, engrave and relief sculpture. Monochromic cave art is a portrait completed with one black color while the polychromic cave art is making a portrait with multiple colors. Now we don’t have any idea when this cave painting first started. One theory links it may start with the evolution of Stone Age art. Here are the top 10 oldest cave paintings in the world.

It is one of the biggest and oldest cave paintings in the world. It is in the northwest of Bulgaria. Its walls decorated by the style of prehistoric cave paintings about 10000-8000 years back. The average temperature of the cave is 12 ° C. Almost there are 700 portrait paintings. They painted different geometrical signs, showed hunters, dancers and as well of different animals’ pictures.

Altamira cave is in the Northern part of Spain. Modesto Cubillas discovered it in 1868. It is almost 3300 ft long. It was rediscovered in the 19th century, it is a unique cave where ancient cave art was found. Scientific society doubts the genuineness of cave paintings because of his quality. Many people didn’t think that this type of masterpiece can be drawn by ancient individuals. The handprints images of charcoal and ochre, pictures of horses inside the cave are well-known best in all over the world.

“Cueva de las Manos” is a cave, which locates in the south of Argentina. It listed one of the top 10 oldest cave paintings in the world. Almost 9000-13000 years before this work of art was done. There are present numerous depictions of hunting and animal scenes. The majority of hand paintings are present here. In 1999 it became UNESCO world heritage property.

It is located in Central India. This cave contains almost 600 rock ceilings decorated with the oldest cave painting in the world. Those people who live in the cave showed life and time with multiple colors like red, white, green and yellow in cave paintings. These paintings almost found 10,000 years before.

Lass Gall is in Somalia and discovered by the French archaeological team. Their paintings are almost 5000-11000 years old. It has a rock shelter and containing the ancient rock art of Africa. In this cave, the people depicted their art with multiple animals like giraffe and dogs and humans. It seems like a vivid rock painting.

This cave locates in France. Marcel Ravidat discovered it. It knows as one of the complex cave. Its walls and ceilings covered with almost 600 parietal art paintings. These paints show the large animals and contemporary fauna that communicate with the fossil evidence of the Upper Paleolithic era. These paintings are almost 17000 years ago. Many paintings made with candles. The most popular painting is the Great Hall of the Bulls which represents horses, deer, and bulls.

This cave found in the mountain range of the Sahara desert in Libya. This area is famous for its rock paintings almost 1200 BC ago. These paintings reveal the environment of the Sahara desert. According to the demonstration of paintings, approximately 9000 years before the surrounding of the cave was having greenery and forest with a herd of huge animals like giraffes, elephants, and ostriches.

Its positions in the northern area of Australia. Almost 5000 years ago Kakadu rock paintings have discovered. These paintings are almost 20000 years old while most of the paintings are 1500 years old. Its most famous excellent example of “X-ray art” in the world. Even, the cave natives not only painted the X-rays but also the bones and internal organs of animals.

The Serra da Capivara national park is in the north of Brazil. It is a hub of various rock shelters that painted with cave art. It is one of the top 10 oldest cave arts in the world. In this cave, there are paintings of different pictures of religious customs, hunters, trees, and animals. According to scientists, these old paintings created almost 25000 years old. There is some complex rock art that dominates the animals and supernatural creatures. Frequently there are depicted a large number of mammals in groups and they are shown in running position as they escaping from hunters.

The Chauvet Cave situates in the south of France. It contains one of the oldest cave paintings in the world. These paintings are almost 32000 years old. Jean-Marie Chauvet and his mates discovered in1994. This cave art includes the paintings of ibex, mammoth, horses, bears, lions, and other animals.