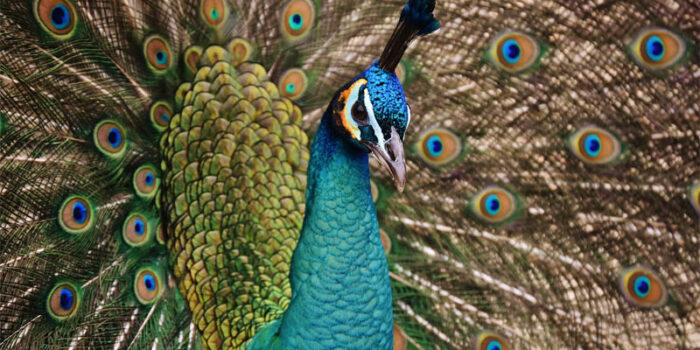 Peacock is famous as the national bird of India and Myanmar. Scientifically they are called Pavo Cristatus. Not only in India, this large and bright colored flying bird almost find in every country. Collectively peacock has termed “peafowl.” The male species are called “peacocks” and, the females are “peahens.” The baby peacocks are known as “peachicks.” Peacock is an attractive creature of God there are many interesting and fascinating facts about it.

Peacock’s reproduction process is almost the same as all other birds and reproduces between January and October. At a time, it lays three to five eggs. The color of its egg is the same as other birds. It has said about the Peacock that it fascinates towards peahen due to their multiple voices during reproduction. A biologist in American Naturalist Research has recorded once its voice. It is one of the largest sized birds approximately it has a length from bill to the tail of 140 to 160 cm and the end of a fully grown tail as much as 180 to 250 cm and, it weighs up to 3.8–6 kg.

10: Largest flying birds on the planet

Peacocks have been listed as the largest flying birds on the planet. It is one of the interesting facts that Peacock is not the largest such as the largest of Storks, Cranes, and Albatross.

09: They are famous for delicacy in Medieval times

During Medieval time, peacocks were plucked, roasted, and then re-dressed in their feathers to appear in their original live state on the dinner table. These birds may have looked attractive, but they supposedly tasted terrible. Melitta Weiss Adamson wrote in her book Food in Medieval Times, “It was tough and bristly, and was criticized by physicians for being hard to digest and for generating a bad sense of humor.

08: Climb on trees at night

It is one of the interesting facts about the peacock that it loves to stay on open grounds and beautiful valleys. They cannot fly in a very height so they climb on trees to spend the night. The intelligent bird builds its nest in the thick bushes and covers its nest with leaves.

Peacock is an omnivore, so by nature, it eats animals like snakes, lizards, and many other insects. Peacock is also helpful for farmers because it also eats the insects on the crops which destroy fields. It has been observed that when lions and tigers are out for hunting then Peacock starts shouting. One of the interesting facts of Peacock is that it is also popular due to its dancing. It performs a slow dance in the rains.

Peacocks that are present in the wild are constantly at risk from different predators and harsh weather. That’s why the limit of their overall lifespan has reached around 20 years or so. However, peacocks are living in a zoo or other controlled environments for as long as forty years also. According to the Wildlife Protection Act of 1972, the hunting of Peacock in India has completely banned.

White-colored peacock is one of the most interesting facts for kids. They are generally identified for their colorful plumage. Few peacocks have manually chosen to breed selectively, giving rise to female peacocks that have feathers without any colors. These have termed as white peacocks. White Peacocks sometimes consider Albinism. But in reality, the White Peacock has hereditarily related options to regulate pigments, and its eyes retain the black color as compared to the red eyes in the Albino.

04: Peacocks are good at flying despite the massive body

Generally, it believes that Peacocks are flightless and low flying birds as compare to the other larger flightless birds. But the reality is different about Peacock, one of the interesting facts about that they are good with flying and areas avid and swift as any other average bird in the skies.

03: Indian Peacocks do not have green or blue pigments on their feathers

Generally, it has been perceived that the Indian Peacocks has pigments on the feathers that make then striking having Blue and Green colors. But in reality, the Indian Peacocks have a microscopic crystal structure in their feathers that reflect other colors which, are making them colorful and attractive. Interesting facts that Indian peacocks don’t have green and blue pigments just as seem.

Peafowl is a social bird also. Typically, it is because of the older peacocks that stay by themselves. As you know, the peacocks sleep on trees so, hey sleep in large groups on tall trees, which calls it roosting. In this way, they can save from other animals. One of the interesting facts about the peacock that as a social animal its makes shrieking sounds to alert each other from danger.

People usually keep peacocks as pets because of their ability to catch snakes and feed on them, even poisonous ones also. Thus, the interesting facts about the peacock that it keeps the village safe from poisonous snakes.