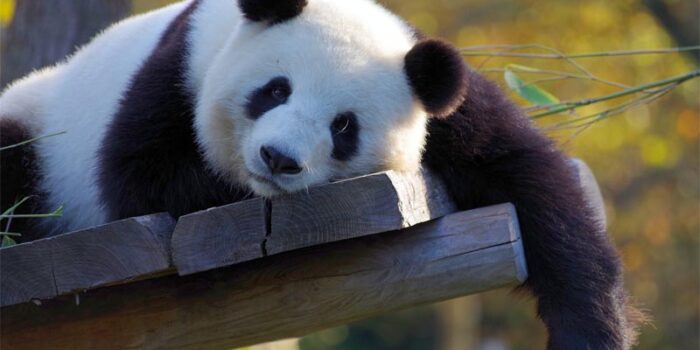 Panda is known as an animal with large, black patches around its eyes, over the years, and across its round body. Two types of pandas exist in the world one is the “giant Panda” which has distinguished from the red Panda. It belongs to the carnivore’s type. The Giant Panda is in black and white-colored bodies and, the Red Panda who is closely connected to the raccoon and skunk family but is a family on their own. Interesting facts that female pandas give born to two offspring, but just the strongest one survives in the wild world. There are many more interesting facts about Panda, which will increase your knowledge about them.

10: Pandas fond of copper and iron

Pandas are very fond of copper and iron. They like to enjoy licking every scrap of food from their metal bowls. Imagine you are living in a remote Mountainair home, and the first time you see a giant Panda, with a huge body comes to your house to eat. You’d perhaps be scared and let it lick your pots. One of the interesting and strange facts and behavior of Panda, that they enjoy “fruit lollipops” because the fruit frozen in a metal dish of water to cool them down in the heat of summer in Chengdu.

Different from many mammals, you know the young pandas cannot crawl until they are three months old. Interesting facts that Panda also does not even open their eyes until about 45 days old. It is so, helpless creature; it needs a protected area like a den until it reached up to 120 days old. After that, they begin to eat solid foods, particularly its favorite bamboo, at 14 months old. They prevent to live alone up to 18-24 months old and will leave to live a solitary life soon after. They live up to 20 years in the forest and a maximum of up to 30 years.

Pandas are one of the shy creatures on Earth. They do not like mingling up easily with others. They require time to come at ease. This makes them a nervous and robust creature usually confided by other species and humans.

Pandas are corresponding creatures to bears and human beings due to their walking style. The soles of their feet touch the ground area wholly in contrast to other animals like dogs, bears, horses, and kittens, which usually walk on the tips of their feet. Interesting facts that Panda is known as plantigrade mammals.

The British natural historical professional and World Wildlife Fund (WWF) founder Sir in 1961. Peter Scott got an idea of using female panda for the logo of WWF. This is because the black-patched eyes of the Panda observed very attractive and easy to draw with just black and white colors. So, the WWF decided to keep it in its logo after then.

One of the interesting facts that baby Giant Panda is born without hair and cannot see for 6-8 weeks after birth. It is just 15-20cms, and weigh just up to 3-6 ounces. Their mother gives extra attention to then and does not leave them at all for the first six weeks, and they stay with her until 18 months old.

You know the favorite food of Pandas is bamboo. The Giant Panda almost spends at least 12 hours a day eating it. For chewing they have giant, strong cheek muscles, which gives them their chubby look. Interesting facts that Panda can peel and eat a bamboo cane in just 40 seconds. They eat 12 to 38 kilos of bamboo in a single day.

One of the interesting facts that Giant Panda has carnivore’s teeth, which help to eat them hard things also. We all know they are fond of eating the only bamboo, but they like some fruit too and can eat meat as well. In the park, you can see Panda eating anything, not just bamboo. Although they have sharp teeth and the digestive tract of carnivores, they don’t have the energy to hunt anything. That’s why their prey would nearly have to land in their lap, or be injured and too slow to escape.

As you know, Pandas eat a lot of bamboos so, it means they do a lot of poop also. The interesting facts that each Panda poops about 40 times a day. This can happen while they are eating and sleeping. Because they are fond of sleeping too.

01: You can see panda babies in August

Pandas are generally born in August; this is because the Panda’s mating months are March-May and, incubation is 3-5 months. The female pandas mainly give birth to two offspring, but only the stronger one survives in the wild world.