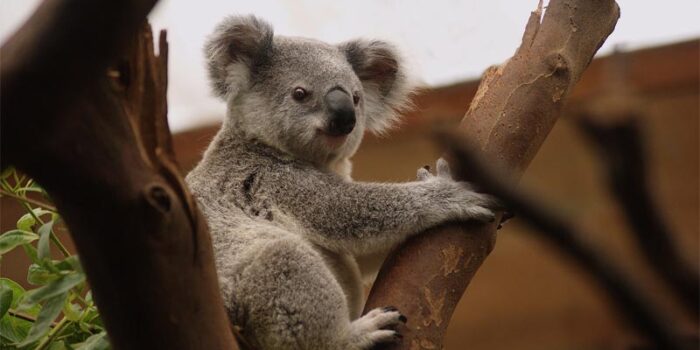 Koalas exist in the eucalyptus forests of Australia. Many people called it Koala bears but, it’s not true they are more closely related to wombat and kangaroo. Joey is the name of a baby koala. You know in Aborigine language, ‘Koala’ means “no water” which stands true for these little animals. Because they do not drink too much water. As they receive most of their water needs from the leaves of the trees which they eat. There are many interesting and strange facts about Koala.

They are famous as nocturnal creatures. It is due to the sleep around 18 hours a day. The main interesting fact that Koala brains have adapted to sedentary lifestyles and, they can survive on a diet that lacks nutrition.

Koala is a national symbol of Australia’s unique wildlife, that’s they just exist in the wild on the southeast and eastern sides of Australia. Furthermore, they find on the coastlines of Queensland, New South Wales, South Australia, and Victoria also. Mostly they live at the top of eucalyptus trees of native bushlands and woodlands.

As we have told earlier that many people have misconceptions about them. They think that koalas are bear and you might have heard also.  Because these furs are as fluffy as bears. Though they might also resemble bears due to their round ears and a big black nose. They share more features with other marsupials like the wombat.

09: Koalas born within 30 days after conception

One of the most interesting facts about Koala that they are members of the marsupial family.  Koalas are like Kangaroos, you know they have short gestation periods. Which means that their babies are born relatively quickly after conception. They have much less developed as compared to other newborns of other large mammal animals.

Koala is born within 33-35 days after conception. Additionally, when a newborn Koala has born it generally remains blind, and hairless. However, Koala’s mother has naturally a pouch in their body which, protects the newborn baby Koala.

Baby Koala just develops within 6 or 7 months. And you know the baby Koala starts its diet of milk. Perhaps one of the weirdest and the interesting facts that Koala leaves the pouch, the mother weans it from milk by feeding it some of the fermented vegetative matter from her cecum. It is an organ that connects the large intestine and the colon.

08: Koalas can hold Food in their belly for Over 8 Days

Baby Koala first takes the initial diet of milk and when they became mature, they start to eat Eucalyptus leaves. For getting more energy out of this diet, the Koala ferments part of what it eats in its gut. Interesting facts about Koala tell us that they don’t ferment the Eucalyptus leaves in its stomach. The fermentation begins in the organs after the small intestine in the digestive process, the large intestine, and the cecum that connects with the large intestine to the colon.

During this process, the bacteria are breaking down the vegetative matter and releasing more nutrients that the Koala absorbs for energy. That’s why they can hold food for a long time for almost eight days. Even with this additional energy, they have a relatively poor diet. Its facts show that the animal has grown to have lower digestion and smaller brain size to compensate for its nutrient-poor diet.

As you know, many animals spend most of their day time in sleep. Well, the Koala is also one of them. Koala interesting facts tells us the shocking truth about them that they sleep more than other animals. Koala takes a poor nutritional diet that’s why they have adapted to expend very little energy. They nap almost 20 hours a day which, is a long period.  When it comes to looking for a place to nap, they don’t look very far. Most of the Koalas eat and sleep in the same tree. They mostly spend time in one tree for over a day, and not moving very much.

06: Baby Koalas are too cute

One of the interesting facts there is no much difference between the fingerprints of a human being a koala. You know they resemble a lot as they can easily be mistaken for each other.

As you know, they eat ecliptics trees ad can hold the food for a longer time. One of the interesting facts that Koala has a smaller brain as compared to its digestive system. It is just because of their diet that they have a bigger digestive system to help digest the toxic leaves. Its small brains due to low energy needs which, aren’t met through their food.

Don’t think about Koala’s size as they grow up to become big eaters. The interesting fact that you know Koala can eat up to one kilogram of eucalyptus leaves in a day. They are too fussy, as they select the most healthy and juiciest leaves from the trees where they spend their life.

02: Koala Chlamydia is a serious disease

Koalas have a common and serious disease, Chlamydia. But it’s not the same strain of chlamydia that affects human beings. Many koalas are vulnerable due to chlamydia disease and it usually shows that when they’re in stressful situations. Due to this disease, they became blind and caused serious reproductive tract infections.

01: Koalas are losing their homes

Many koala populations are facing the problem of losing homes due to the destruction of deforestation. Within just last two years, tree-clearing has tripled in New South Wales, leaving important koala habitats incredibly fragmented or completely lost. Due to clearing trees, they have to spend more time on the ground in search of food and shelter. Due to the clearance of trees sometimes they are being hit by vehicles, or mostly prey by dogs and falling ill to stress-induced diseases like chlamydia.