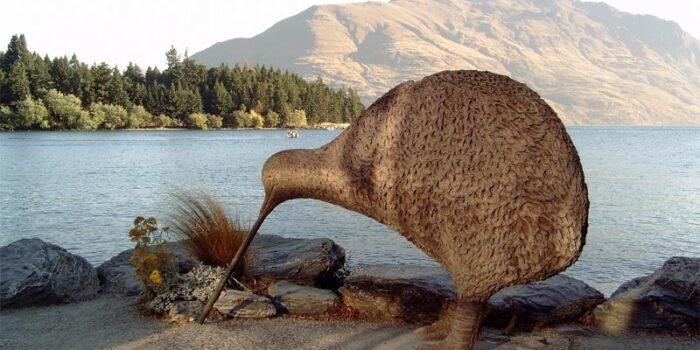 The Kiwi considers as a small group of birds that live on the islands of New Zealand. Interestingly New Zealand people are also called Kiwi. Researchers spotted the five different species of these birds, which the Great Spotted, Little Spotted, Okarito, Common, and also including the North Island Brown Kiwi. Interestingly, most of these birds are just around the size of a chicken, but they have a different shape and don’t look like them.

These birds have long, narrow beaks, round-shaped bodies, and short legs, which makes them different from other birds. They are in uniform brown color and quite soft in look. They cannot fly high, and their wingspans are very small and useless for them. Most of these birds have weight just around six or seven pounds and measure about a foot and a half long. There are many interesting and unique facts about Kiwi, which makes them different from others.

The unique and interesting facts about Kiwi, that they have such large eggs, short and stout legs, or using their nostrils to detect prey. Kiwis lay the largest eggs as compared to their body size. Female Kiwis produce a single but a huge egg. Additionally, the egg weighs up to a third of the weight of the female, which is around one pound. Wow!

The eyes of the kiwi are the smallest unit as compare to the large mass of the body in all avian species resulting in the smallest visual field as well. Interesting facts that Kiwi eyes have some small unique features for a nocturnal lifestyle. But they rely on more than other senses like auditory, olfactory, and somatosensory systems. Their wings are only around 3 cm long but are useless, as they are completely hidden under their feathers.
The kiwi has strong muscular legs but it doesn’t have a tail. Its legs are very useful for it and about a third size of its body weight. Its strong legs help in running after prey and fighting with it.

Researchers cannot tell about the specific diet of Kiwis because each species have a slightly different diet than others. They are mostly omnivores, which means that they can eat both plants and animals. Also, they eat fruits and berries. It is a curious bird as it always searching something into the soil with its long beak. Once they find their prey, they flick it on the ground to stun or kill it before eating it. They hunt worms, small fish, crabs, insects, grubs, frogs, insect larvae, spiders, and many more. Earthworms are the favorite one of the items that they eat and like most.

Kiwis are a cultural icon in New Zealand and find frequent here. Unfortunately, humans have to face some problems due to it. One of the main problems is they like to eat the rubbers of windpipes and damage the car items.

06: Behavior of the Kiwi

They have a specific breeding season, and outside this season, they usually live alone or in breeding pairs. They utilize their time hunting in the woodland’s floor in search of worms and other small prey. Now, these birds hunt their prey at night and hide it undergrowth during the day. However, if they find nothing during day time they remain active during the day as well. Where Kiwis find no predators they forage during the day time.

Kiwi birds are among the few types that tend to live as monogamous couples. During mating season, the male and female Kiwis call out to their respective momentous others at night. And meet in their nesting holes after every three days. Interesting facts that Kiwi relationships bonding is so strong and, it can last over 20 years.

As you know, they can’t fly they have grounded birds. When humans didn’t arrive in New Zealand around thousands of years ago, there were no global hunters which endangering the kiwi population. So that time most flightless birds were comparatively safe on their nest in the ground. But now they are unsafe due to the population of humans.

03: Symbol of Kiwi in New Zealand

One of the interesting facts that the kiwi as a symbol first appeared in New Zealand during the late 19th century. After that, It was later introduced in the badges of the South Canterbury Battalion in 1886 and the Hastings Rifle Volunteers in 1887. Soon after, they also appeared in many military badges. Interesting facts that, when Kiwi Shoe Polish was widely sold in the UK and the US, this symbol became famous more worldwide.

02: Camouflage in the woods

Kiwi birds have the same color as woods and, they are fluffy, hair-like feathers that assist them to camouflage in the woods.

Maori are the people of New Zealand, they used to hunt Kiwis for their meat and soft feathers for various purposes. But just hunt it for needs because they believed that Kiwis had protected by Tane Mahuta- God of the forest.