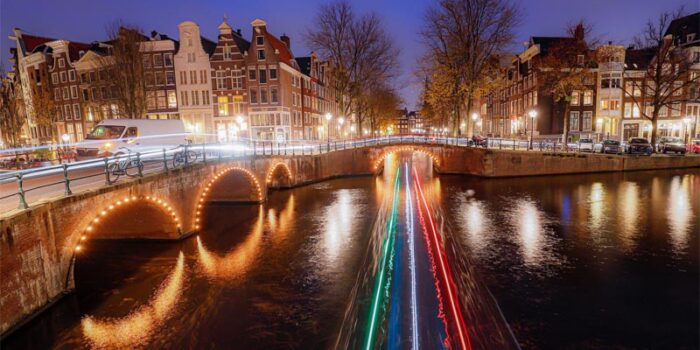 The Netherlands is located in Northwestern Europe and partly in the Caribbean. The total mass of the area is approximately 41,865 square km. The capital and most populous city of the Netherlands is Amsterdam. Citizens use Dutch as the official language of the state. It shares four borders with neighboring countries that are Germany, Belgium, France, and the United Kingdom. Netherland has a lot of interesting facts you know the literal meaning of the Netherlands is “low countries.” It is because around 50% of the land exists is just over 1m above sea level. Furthermore, 21% of the state’s population and 26% of its area is below sea level. There are many more interesting facts about the Netherlands which, you may not hear before.

09: Amsterdam has constructed on Poles

Amsterdam is the capital city of the Netherlands, its soil contains a thick layer of fen and clay, all buildings are built here on wooden poles. These poles are fixed in a sandy layer that is 11 meters deep. Currently, concrete is added to coast up the piles. If you want to visit Amsterdam today, you can see that many of the buildings have certainly leaned to them, but thanks to degrading poles, and incompatible sizes.

08: Bicycles are in abundance

You know the Netherlands has a lot of bicycles. Approximately bicycles are equal to the population. Only around 799,400 people are living in Amsterdam. Through estimation, you know around 100,000 bicycles steal each year. But looking at the multistory bicycle parks in Amsterdam, you might wonder if people just forgot where they park their bikes and became embarrassed to say.

In cities, huge areas of real estate have given the bicycle parking bays, and the area has some of the most widespread bicycle-only lanes on Earth. The interesting facts of Netherlands, day by day bicycles are increasing.

07: 6th happiest nation in the world

The Netherlands lies in the 6th happiest nation in the world. It is an estimation of current research in 2020. This annual study report has comprised 156 countries by their happiness levels, taking into account factors such as healthy life span, freedom, trust, corruption, and social support.

06: Highly English-proficient people in the world

During visits to the Netherlands, you will observe that this nation is highly proficient in the English language. Then you are lucky because this clever nation is better at speaking English. According to the estimation of the EF English Proficiency Index, the Dutch are proficient speakers of English, narrowly beating Denmark and Sweden. Interesting facts that in the Netherland, between 90-93 percent of the population can speak English as a second language.

05: Highest consumers of licorice in the world

The Dutch are one of the biggest consumers of licorice in the world. Interesting facts that Netherlands shops are selling over 80 different sorts of licorice and its people consuming two kilos per person per year. It means they are consuming around 32.000.000 kilos per year.

04: Tallest people in the world

It’s fairly common in Netherland, the Dutch people are famous as the tallest people in the world. While the average American man is around 5’9″ ft, the average Dutchman stands at well over 6′ ft tall. They are a gigantic 19 cm taller than their counterparts in the mid of 19th century. Many people have researched it why the Dutch people are so tall, though the reason behind their height is still doubtful. Netherlands’ gigantic height is one of the interesting facts.

The Netherlands is lying as the world’s leading Tulip exporter in the world. This state is expected to export 2 billion dollars’ worth of tulips in 2017. However, the interesting facts of that the tulips are not native to the Netherlands and they were imported from Turkey in the sixteenth century.

The amazing Netherlands is a secular state. You know around 40% of its population is not religious at all, 30% are related to Catholic and 20% are Protestants.

01: Discovery of microbiology and virology

The first complex microscope constructed in the Netherlands in 1590. This is one of the interesting and amazing facts of the Netherland. In the 1670s, Antoine van Leeuwenhoek, who called ‘the father of microbiology’ observed and explored about microbes. In 1898, Martinus Beijerinck presented the theory that disease could be caused by an agent smaller than bacteria, that is called a virus.