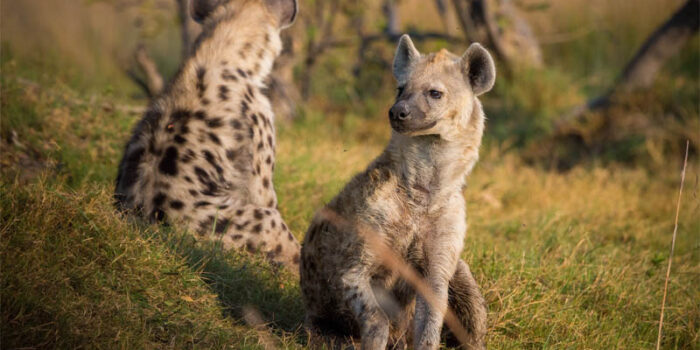 Hyena is a feliform carnivoran mammal of Hyaenidae‘s family. With only four extant species, it is the fifth-smallest biological family in the Carnivora, small Mammalia. Hyenas are exceptional and vigorous components of most African ecosystems. These animals flourish in woods, plains, savannas, and high latitude areas. They have longer front legs than the back legs and, their standing posture is similar to that of bears. They make a sound that resembles a laugh when they are excited that gave rise to the expressing laughing hyena. The laughing sounds that they make are so loud which, can be heard from a distance of 3 miles. Besides the hostile and offensive creature, there are many interesting facts about hyena.

There are three different species of hyena are existing on this planet. These are spotted, brown and striped hyena but, the spotted hyena is the largest and most common species that find in worldwide. They are a huge and dog-like mammal.

Although they are not related to the members of the dog or cat families instead, they are so exclusive that they have a separate family, Hyaenidae. The spotted hyena’s body can grow up to 2m long, and a dark, bushy tail which, measures up to 25-30cm long. Female Hyenas are weightier than males, and they can weigh up to 82kg.

Hyenas have originated in the forest of Miocene Eurasia around 22 million years ago. At that time, most early feliform species were still mainly arboreal. Interestingly, the first inherited hyenas were likely parallel to the modern African civet. Below are some features and interesting facts about hyena which, will increase your acquaintance with them.

Hyenas don’t attain long life, they got an average lifespan of 12 years, but they can live up to 25 years also.

09: Hyenas are a smart creature

One of the interesting facts about hyena, that the size of a single hyena’s frontal cortex has been observed and linked to its social intelligence. At Duke University, a study tells that an imprisoned pair of hyenas performed better at problem-solving and social collaboration than chimps. Even the astounding thing is that during the study, these creatures solved all the problems in silence, using only non-verbal indications for communication.

08: Killer of the baby lion

Hyenas and lions don’t like each other and, they often fight over the same territories and hunt the same prey. This fight leads to fierce competition between the two creatures. Interestingly, in this fight, they steal each other’s food and kill off the young ones of their enemies too. Hyenas are the main killers of lion cubs.

Spotted hyenas don’t just scavenge for lion’s remnants. Mostly spotted hyenas chase and kill in groups. You know a group of hyenas can consume an entire zebra, without leaving anything not, even the bones—in under half an hour. But another species of striped hyenas have a different story. They just live off of meat which, is often hit by vehicles while eating roadkill.

Spotted hyenas are social mammals and live in an organized group which is called clans. These clans have comprised of 80 individuals. One of the Interesting facts about a hyena that they follow a strict hierarchy. Females hyenas have high rank than males, and mostly the group is led by one powerful alpha female.

05: Not suitable for pet

Historians told that ancient Egyptians tamed striped hyenas and used them as a food source. In early hieroglyphics, they are often shown in secondary positions, being hunted and tamed. But in a 2010 paper published in the International Journal of Osteoarchaeology, A. J. told that it was just Egyptian pomp. Because they live off of carrion, they would make for a terrible meal. However, it is very difficult to tame them, as they are not suitable pets.

04: Hyenas can live without water

Hyenas are very rough and tough creatures; they can travel long distances as they have built for endurance. Interesting facts about Hyena that they can live several days without taking water.

Hyenas have a super-strong jaw and teeth they can chew through every part of their prey, except its horns. Its strong jaws are one of the interesting facts of hyena. Furthermore, they are very dangerous and cunning creature which hunt other creatures through different hunting tricks.

As you know, hyenas are very cunning creatures when it comes to hunting spotted hyena species that use a special hunting trick. In a herd, one hyena takes the job of creating confusion between animals they want to kill. Then, the other hyenas pick up a feeble or old animal and hunt it down and chase away from the other animals.

Spotted hyenas are recognized as laughing hyenas. It is because they are highly intelligent creatures who communicate through yells, shouts, and hoots. Interesting facts about a hyena that its laughing sound, which can be heard almost 5km away.